How Israel is saving the honeybees

The international scourge of colony collapse disorder affects Israel’s bees less than in other countries, due to a variety of innovative strategies. 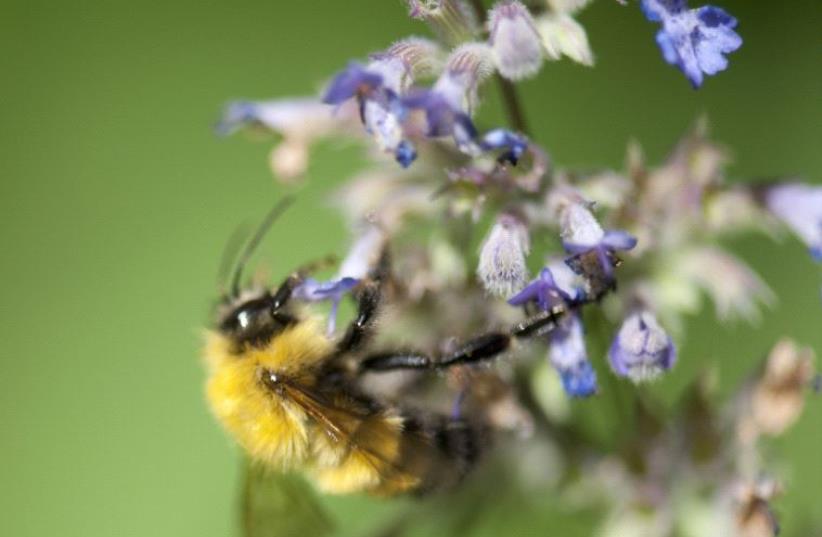 Honeybee
(photo credit: ING IMAGE/ASAP)
Advertisement
Honeybees across the world are in a sticky situation. Their numbers are dwindling dramatically due to colony collapse disorder (CCD) for reasons that are not fully understood.Yet the honeybee population in Israel is holding steady.That’s great news at this time of year, when sweet Jewish New Year dishes push honey demand to its peak. And most importantly, bees play a crucial role in agriculture by pollinating vegetables and fruits.Israel takes measures to ensure that its bee population declines no more than 10% each year, compared to 30% to 50% in the United States, where the problem is so severe that Häagen-Dazs ice cream has donated $1 million to honeybee research since 2008, and President Barack Obama initiated a national strategy to promote bee health.“We try all kinds of things,” Israeli Honey Board CEO Hertzel Avidor tells ISRAEL21c, such as supporting Israeli research into all the biological and botanical angles on CCD, from boosting bees’ immune systems to developing nectar- rich plants.The council helps Israel’s 500 beekeepers implement innovative tactics to support a collective 110,000 hives. (The slight reduction in bees does not affect Israel’s honey supply because each year more colonies are introduced to offset the loss.Climate is the main variable in reaching an ideal annual yield of 3,000 tons, Avidor says.) The first step in avoiding CCD is to follow Agriculture Ministry guidelines for eradicating Varroa mites, a parasite considered a core cause of CCD.But another significant strategy for healthier bees and tastier honey is the 80,000 to 100,000 seedlings – especially eucalyptus trees – planted every year to give bees a varied, abundant diet across the seasons despite the loss of open areas to urbanization.These seedlings are provided free by the nurseries of Keren Kayameth LeIsrael-Jewish National Fund (KKL-JNF).Greenery, bees and honey Some plantings serve a double purpose. The Honey Board worked with the Defense Ministry to plant eucalyptus along the Gazan and Syrian borders, for example, to nourish bees while protecting those areas from hostile fire. “It’s a winwin situation,” says Avidor.Aviv Eizenband, head of forestry and professional development at KKL-JNF’s Forest Service, tells ISRAEL21c about another win-win situation.“As open areas are decreasing in the last decade, we find ourselves with less land for afforestation.Beekeepers have land but don’t have enough flowers and shrubs to attract bees. So over the past 15 to 20 years we are cooperating with organizations like the Honey Board to make Israel greener and help beekeepers attract bees at the same time,” says Eizenband.“Everybody benefits: we have trees, the bees have flowers and the keepers have honey.”Beekeepers say the effect of this project is revolutionary.Previously they had to spread hives across the country to maximize feeding areas, leading to problems of theft and high costs for transportation.Now their bees are close to home and can be better guarded.And thanks to winter flowering species introduced by the KKL-JNF, beekeepers rarely have to feed the bees with sugar water in cold months, a practice that is costly, not as healthful for the bees and doesn’t produce the best honey.“We don’t do research on bees, but we are always looking for which plants and trees the bees like, and we work with researchers seeking solutions for bees because plants and bees are directly connected,” says Hagay Yavlovich, director of KKL-JNF’s Seeds and Nurseries Division.Sharing knowledge With funding from the Israeli Honey Board, the KKL-JNF recently released an English translation of its catalogue listing nectar-rich seedlings for beekeepers. Eizenband says there is great interest from professionals from other countries who have seen Israel’s presentations at international conferences.The catalogue lists many varieties of eucalyptus as well as trees and shrubs such as tamarisk, broad-leaved bottle tree, Syrian ash, rosewood and arroyo sweetwood.The flavor and texture of the honey vary according to the type of blossoms from which the bees gather nectar. Most honey sold in Israel contains a mixture from sources including orange, plum, eucalyptus, za’atar, avocado, carob and thyme.Yavlovich trains both Israeli and foreign beekeepers on which varieties to plant and how to adjust plantings to nourish honeybees throughout the year.Researchers from India’s Nimbkar Agricultural Research Institute came to the KKL-JNF National Seed Center in Beit Nehemia last November and again this month to learn tips on growing eucalyptus and other flowering plants for better honey production. The KKL-JNF has also sent seedlings to Jordanian beekeepers in the past.Yavlovich says one of the causes of CCD is a monotonous diet.“In central Kansas, for example, the bees see fields of only soybeans and corn, and that’s not good. We assume the fact that we give bees a variety of flowers to taste from makes them stronger and we have fewer problems with CCD than in other countries.”The Americans were astonished to learn that Israeli beekeepers receive nectar-rich plants and trees for free.“In other countries they encourage people to plant trees, but I don’t know of any other country where they give them away,” says Yavlovich. • Reprinted with permission from ISRAEL21c.www.israel21c.org
Sign up for the Health & Wellness newsletter >>