HU student recovers after being treated for snakebite on Golan 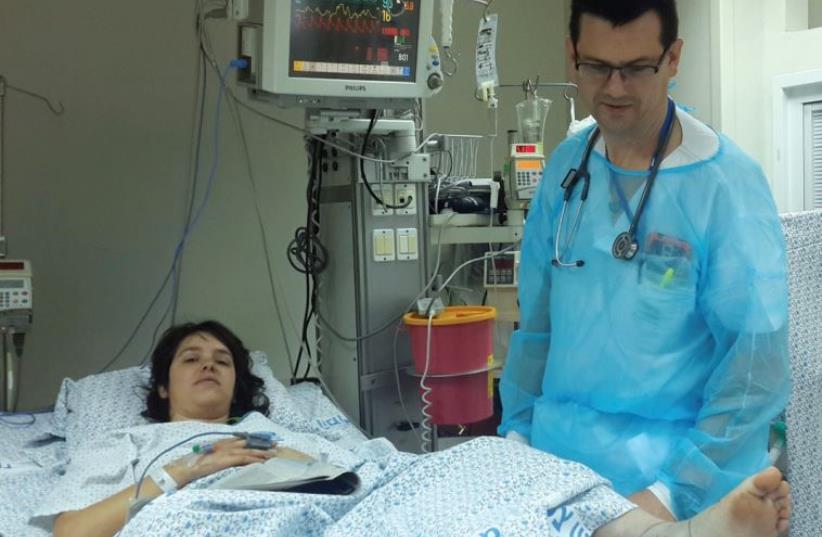 ZIV MEDICAL CENTER intensive care specialist Dr. Ivan Pashkilov yesterday examines Shaked Ben Ami as she recovers from a poisonous snakebite
(photo credit: ZIV MEDICAL CENTER)
Advertisement
Hebrew University law and social work student Shaked Ben Ami, 27, is improving after being bitten on the foot by a poisonous viper during a trek on the Golan Heights on Sunday. She already started vomiting in the Magen David Adom ambulance on the way to Safed’s Ziv Medical Center and was unstable, but her condition improved after treatment with anti-snake serum at the hospital’s intensive care unit.The warmer-than-usual temperatures in the last two months have awakened snakes from their winter-long slumber. The hospital previously treated for snakebite a 10-year-old boy who was traveling with his class near Rosh Pina. There have been years in which more than 50 children and adults were bitten by snakes.Hospital doctors said that only emergency rooms have serum to neutralize the effects of snake venom. The victim must be taken immediately to the hospital with as little body movement as possible and remain calm, because a rapid heartbeat causes the venom to spread faster. Never cut the skin around the wound to try to remove the poison.Experts advise travelers to always wear closed shoes or high-top boots, walk on designated paths, not to pick up or move rocks and to set up tents on well-lighted spaces that are clean of rocks and thorns.
Sign up for the Health & Wellness newsletter >>