Many hope that this new development will be a breakthrough and better the lives of millions.

PROF. GIL BOLOTON examines patient Robert McClaken at Haifa’s Rambam Medical Center
(photo credit: PIOTR FLITR)
Advertisement
Millions of people around the world suffer from congestive heart failure, which occurs when the heart is unable to pump sufficiently to maintain blood flow and meet the body’s needs. Signs and symptoms commonly include shortness of breath, excessive tiredness and leg swelling. The disease, which can be fatal, has no medical solution.However a new Israeli patent, implemented for the first time in the world at Haifa’s Rambam Medical Center, can change this situation and become a “therapeutic breakthrough,” said Dr. Yair Peled, the cardiologist who invented it.Robert McClaken, 72, of Canada recently made history by becoming the first person in the world to undergo the surgery for cardiac insufficiency.McClaken, who has suffered from severe heart failure in recent years, came to Rambam to undergo the procedure. The operation, is arousing great interest in the medical world.McClaken reported a significant improvement in his condition and in a few days he will be discharged and return home to Canada. 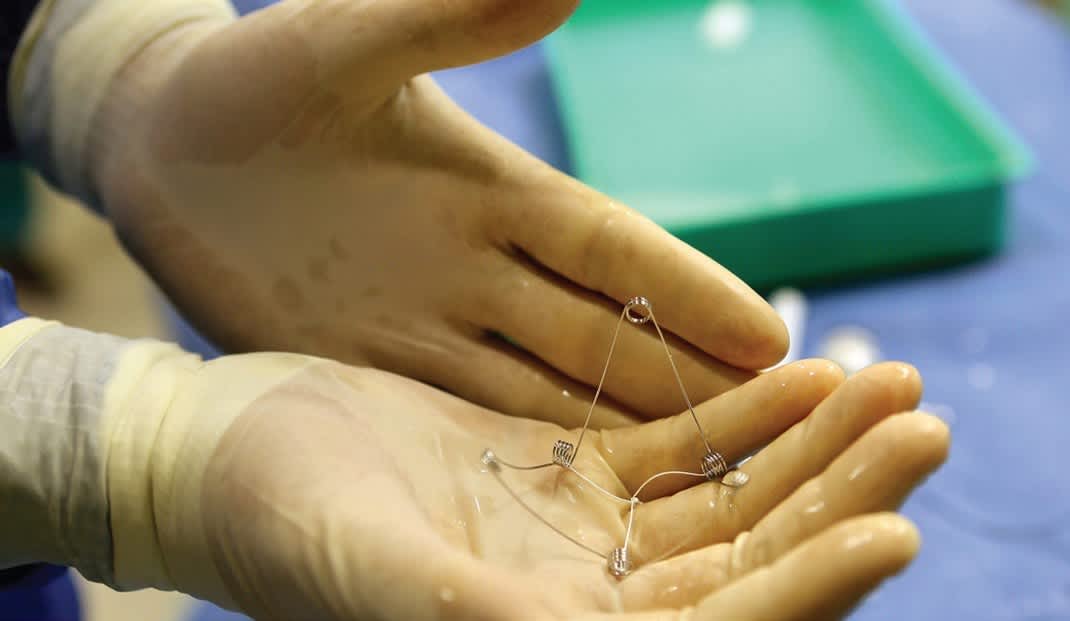 An Israeli device that can be inserted into a patient's heart to treat congestive heart failure. (Piotr Flitr)
It’s estimated that some 10 million people worldwide suffer from diastolic heart failure, about 100,000 of whom live in Israel. It is a common disease that is manifested when the heart fails to relax and expand back after it shrinks, an impairment that damages its functioning as a pump of the body.The symptoms cause deterioration in their medical condition, respiratory complications, repeated hospitalizations as a result of edema (accumulation of fluids in the lungs and tissues of the body) and in some cases may be fatal.Many hope that this new development will be a breakthrough and better the lives of millions.Peled, who heads Israeli start-up company CorAssist, and his co-founder Dr. Yotam Reisner, developed a CoRolla device that is implanted in the heart and assists in the relaxation process. This device is a type of spring whose action is based on storing energy during the contraction of the heart muscle and releasing it during relaxation to expand the heart to its normal level.In a minimally invasive operation, while the heart is beating, the spring was implanted by catheter in the left ventricle of the heart. The patent, developed over many years, is currently in clinical trials in humans.The surgery was performed by Prof. Gil Bolotin, director of Rambam’s cardiac surgery department, and Dr. Arthur Kerner, a senior physician in the invasive cardiology unit, among others. It received special approval from the Health Ministry as an experimental procedure.“Over 40% of the patients who are in Robert’s condition are expected to die within five years of diagnosis,” Bolotin said. “In a very simple mechanical way, we are actually trying to solve an unmet medical problem, even though it’s a bit scary to be the first to do it.”McClaken said he’s “been sick for three year, and the thought that I might die is ringing in my head all the time.”“When I heard that there was a possible solution in Israel, I took a plane and came,” he said. “I am very happy to be the first person in the world, and I have the opportunity to help other people in my condition.”