Israelis set to explore the stars with new educational partnership

The Ramon Foundation and NanoRacks are pairing up to bring outer space closer to Israeli students. 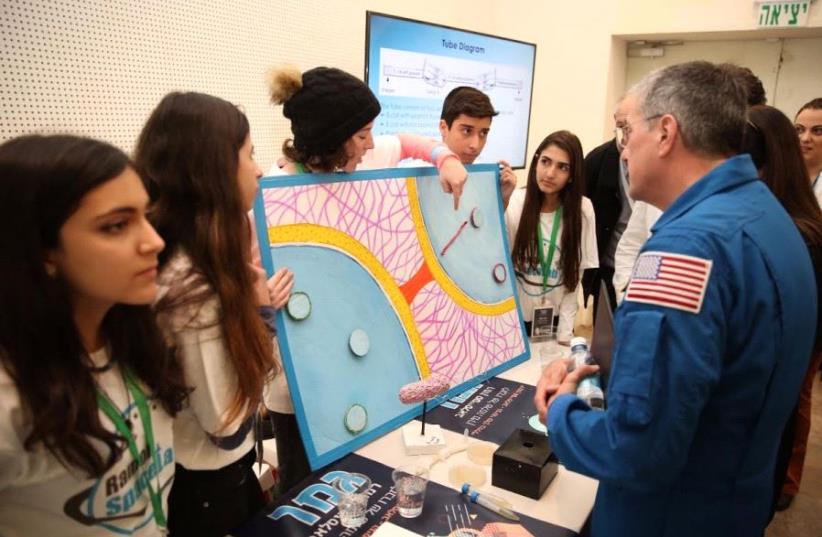 Israeli students presenting experiments to astronauts in February at a SpaceLab event at Bar Ilan
(photo credit: RAMON FOUNDATION)
Advertisement
The Ramon Foundation wants to bring outer space a little closer to Earth. To do that, the organization has formed a partnership it expects will reduce the costs of research projects for schools and other institutes and bring educational opportunities to Israelis.The group has joined forces with Texas-based NanoRacks, a private company that provides services and products for research aboard the International Space Station. As a result of the agreement, schools and Israeli research entities will be able to use the station to conduct studies at a fraction of previous costs, according to Ran Livne, CEO of the Ramon Foundation.The foundation is named for Israel’s first astronaut Ilan Ramon, who died during the fatal mission of the Columbia space shuttle in 2003. Its stated purpose is to promote Ramon’s legacy of “academic excellence, social leadership and groundbreaking courage.”“The goal is to make space more accessible to Israelis,” said Livne. “In order for future generations to view working in the space industry as something natural and to increase their integration into the field, we run the Ramon SpaceLab program that enables secondary students around the country to launch experiments in the fields of food and medicine, and acquire practical experience.”The Ramon SpaceLab, active in 24 schools in Israel and New York, already allows students to submit experiments to the International Space Station through an annual researchbased learning program. If selected, these experiments are conducted at the expense of the foundation.With the agreement with NanoRacks now in place, however, schools, universities, corporations and educational institutions will be able to finance their own experiments aboard the station, a spokesman for the Ramon Foundation explained. Because the dispatch of the experiments will be consolidated by the foundation, the institutes can participate at a significantly reduced price of about NIS 46,000.Continued research in space is particularly important.Among the many things still unknown about space are the impacts of micro-gravity on the human body and on natural phenomena, Livne explained. On Earth, for example, a small amount of salmonella bacteria would not threaten the planet’s overall environment, the same amount in space could result in the deaths of astronauts, he said.“Experiments in space can contribute to medical research and coping with diseases,” Livne continued. “Space research has a tremendous impact on our lives.”Many technologies in use on Earth today were invented or improved as part of space industry developments, such as water purification systems, medical equipment and elements of today’s sneakers and tires, he said.“Already today, space research is influencing communications, Internet information traffic, navigation and agriculture,” Livne added.“We hope that the expanding cooperation with NanoRacks will make Israelis closer to outer space.”