Dr.-Maj. Ritesh Goel, who singlehandedly treated more than 80 people before helicopters could arrive at the avalanche site, lectured at Ziv last week. 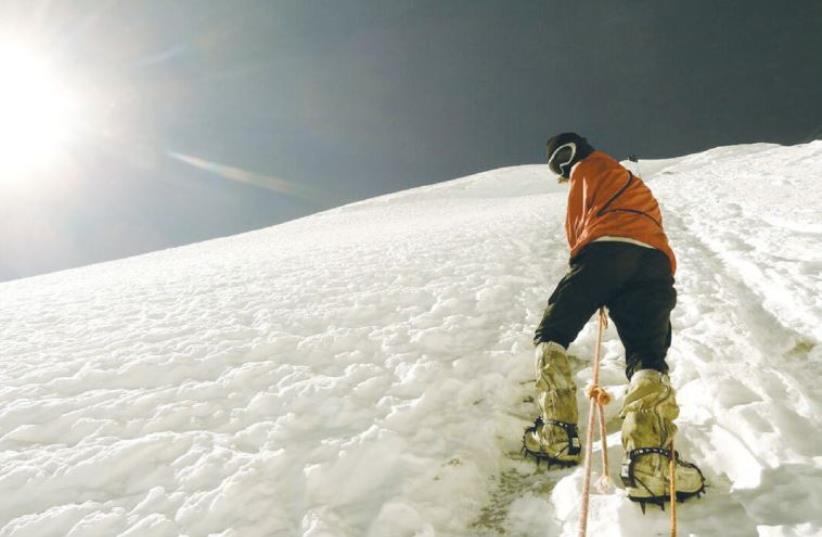 DR. RITESH GOEL walks on Mt. Everest
(photo credit: Courtesy)
Advertisement
The next time doctors at Safed’s Ziv Medical Center are faced with a case of altitude sickness, they will be better prepared after receiving tips from Dr.-Maj. Ritesh Goel, part of the Indian Army Expedition at the Mount Everest base camp when a powerful earthquake struck Nepal a year ago – causing a deadly avalanche.Goel, who singlehandedly treated more than 80 people before helicopters could arrive at the avalanche site, lectured at Ziv last week, telling staffers that Everest climbers can also face the collapse of glaciers and breathing difficulties.Since 1920, he said, thousands of climbers have tried to reach the summit of the world’s highest peak and more than 200 have died.Climbing Everest, he said, requires both physical and emotional stamina to overcome the lack of oxygen, cold temperatures, wind and pain.Because the environment is totally unnatural to climbers, he said serious medical problems can occur even on skiing vacations or regular mountain-climbing treks – and even young people in good physical condition are in danger.If climbers go up the mountain too fast, they can suffer from altitude sickness. Symptoms are weakness, strong headaches, shortness of breath, nausea and sleep disruptions.It can be temporary, however, as those who live at high altitudes of 3,000 to 5,000 meters above sea level can get used to it.Those who do not, however, can die due to the relatively low oxygen pressure there.Since the climb itself requires a lot of oxygen, Goel said one must have excellent heart/ lung function, strong muscles, equilibrium, coordination, alertness and flexibility.Climbers who can’t cope develop hyperventilation and a fast pulse even at rest, and their aerobic ability falls sharply, said Goel. He recommended that oxygen balloons be taken with climbers if they have trouble breathing.As a result of the exertion, the body releases significant amounts of anabolic steroids, causing catabolic processes in which muscle tissue breaks down. Therefore, nutrition must be suited for the exertion and include a lot of carbohydrates.Goel presented attendees with a study by Dr. Kent Moore of the University of Toronto who studied 212 cases of death on Everest between 1921 and 1996 among climbers taking three different routes to the top.He found that 192 of the deaths occurred when climbers had already left their base camp, the last station before the most difficult part of the climb. Those who died over 8,000 meters did not have breathing problems, but their cognition suffered and their brains swelled. The majority of those who died over 8,000 meters, he said, tried to descend via paths that turned out to be the most difficult.It takes about 60 days to reach the summit; most deaths occurred on the first day of the attempted ascent.Goel advised would-be climbers to go no more than 300 to 350 meters a day when above 2,500 meters and not to continue if they notice symptoms of altitude sickness.
Sign up for the Health & Wellness newsletter >>