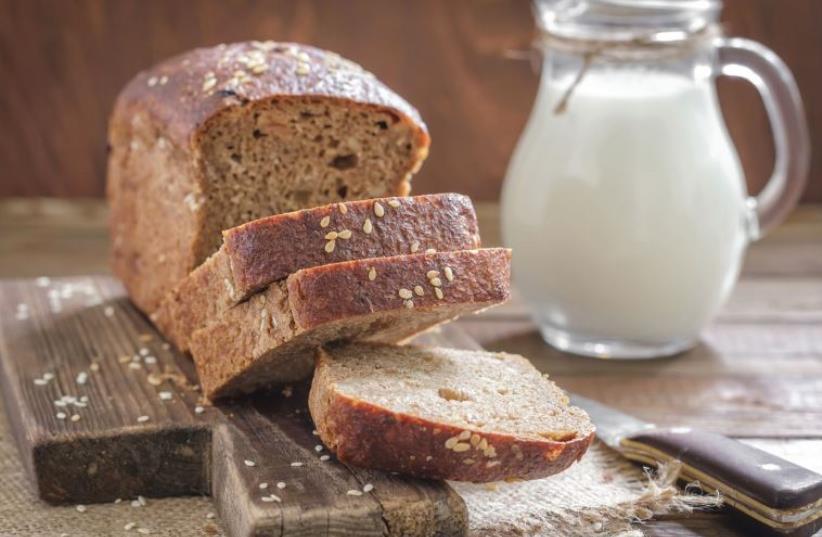 Light bread
(photo credit: ING IMAGE/ASAP)
Advertisement
The Nazareth (Scottish) Hospital was the first three years ago, and remains the only medical center in the country, to serve only whole wheat bread to its patients, staffers and visitors instead white bread. The hospitals owned by the Health Ministry, Clalit Health Services, voluntary organizations and private companies have not adopted the change.Only now is the ministry pressing the Treasury to remove price controls and subsidies on white flour and bread and place controls and provide subsidies on whole wheat products.“I don’t care how much more it cost us,” hospital director Dr. Bishara Bisharat told The Jerusalem Post on Wednesday. I didn’t want our patients, staff and visitors to get food that is inferior and not nutritious. It costs more, but we made a deal to have whole wheat baked goods provided to us at a lower price by the Oranim bakery near Nazareth. Now Arab bakeries in our city have started to produce more whole wheat products for all residents.Bisharat, a graduate of the Hebrew University-Hadassah Medical School in Jerusalem who holds a master’s degree in public health from Harvard University, is chairman of the Society for Health Promotion in the Arab Community in the Israel Medical Association. He is also a senior lecturer in the Bar-Ilan University Faculty of Medicine in the Galilee and a lecturer at the School of Public Health at the University of Haifa.He has spoken in Knesset committees and other public forums on the importance of whole wheat consumption, but neither the ministry nor other hospitals have followed his example. “I mention it at every opportunity,” he said.He launched the policy change three years ago with Samar Tamawi, his hospital’s nutrition adviser, who earned a master’s degree in food engineering from Haifa’s Technion- Israel Institute of Technology.“At first, patients and staff asked about the change, but within two weeks they all got used to whole wheat bread and began to prefer it,” Bisharat and Tamawi said. “It’s a matter of getting used to it. The Arab sector eat a lot of bread, so getting them to change to whole wheat is very important to their health.”Researchers have shown that whole wheat products reduce blood sugar and the risk of diabetes; help prevent colon cancer and other gastroenterological diseases, reduce overweight and obesity and are more satisfying.Three years ago, Bisharat and Tamawi asked staffers about their consumption of grains and their health.Although they have not yet conducted a formal follow-up survey, they asked them recently and have the impression that their health and that of their families has improved with the adoption of a whole grain diet at home as well as at work.“I feel there is a big change,” said the head of the Christian- based hospital. Three years ago, 90 percent of Nazareth Arabs ate white bread, but the proportion has changed since then.”Tamawi notes that the ministry must supervise, as some bread products are “colored” brown with caramel (burnt sugar that many believe is a potential carcinogen) instead of including whole wheat flour. Baked goods sold as whole wheat should have at least 80 percent whole grains, with the rest white flour.“We encourage people to ask in stores and restaurants if it is real whole wheat or just made from colored white flour,” she added.Whole wheat breads and rolls should be sold separately from white bread in stores, with a written ministry endorsement hung over the whole wheat, she said.The cafeterias in Nazareth Hospital also provide better fare. “We offer salads, fruits and water and non-sweetened fruit juices for sale, along with poultry and fish. There are no bottles of cola and other sugared beverages on display.They are hidden and served only if customers insist on it,” said Bisharat.The hospital director has spoken to Health Minister Ya’acov Litzman and his predecessor MK Yael German about requiring all the other hospitals to follow his hospital’s example, but despite promises, it has not happened.
Sign up for the Health & Wellness newsletter >>