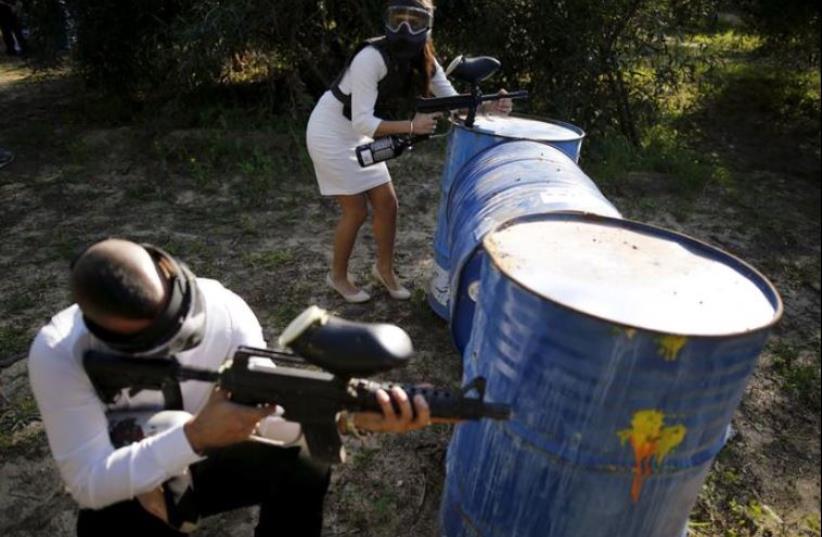 Paintball.
(photo credit: REUTERS)
Advertisement
• By JUDY SIEGEL Injuries from paintball have become “one of the most alarming ocular injury trends in recent years,” according to ophthalmologists at Meir Medical Center in Kfar Saba and Emek Medical Center in Afula.Drs. Arie Nemet, Leena Asalee, Yaron Lang, Daniel Briscoe and Ehud Assia wrote about injuries to the eye from paintball – the popular “war game” in which tiny, non-toxic spherical projectiles containing dyes are shot at each other – in an article in the January issue of IMAJ - the Israel Medical Association Journal that should awaken young adults and parents of youths who participate in such a game.They looked at five cases of significant eye injury from the exploding balls, which can reach a speed of 35 to 100 meters per second.“Eye trauma due to paintball can range from mild to very severe injuries, which can lead to blindness,” they wrote, noting that the first reported case appeared in Archives of Ophthalmology in 1985.Since then, paintball establishments in various countries, including Israel, have been told by the authorities to insist on eye protection and education on the dangers, but they are often ignored and not enforced.In the US alone, paintball- related eye injuries treated in hospital emergency rooms have more than doubled from 545 in 1998 to 1,200 in 2000, with twofifths occurring in teenage boys.The authors discuss five Israeli cases – all male victims aged 15 to 30, treated at Meir and Emek, who suffered damage to their eyes.The first patient, a 22-yearold man, was hit in the right eye by a paintball in 2001.The victim was not wearing protective goggles while playing.He suffered a scarred retina, macular detachment and proliferative vitreoretinopathy (a disease that develops as a complication of retinal detachment) resulting in very poor vision even after surgery.The second was a 19-yearold playing in a licensed establishment who had removed his goggles while still in the game zone. A paintball hit his right eye, causing a flattened retina and other damage.The next was a 30-year-old hit in his right eye in 2013.He was not instructed properly on safety and eye protection, the ophthalmologists wrote. While fixing the protective face mask in the play zone, his eye sustained a direct hit, causing a cataract that had to be removed and replaced by an artificial intraocular lens.The fourth case was a 21-year-old man hit in the left eye in the summer of 2012. He was not wearing goggles. He could not count the doctor’s fingers except when they were one meter away. A year later, he still had a scar and pigmentary changes in the macula of the eye.The last victim, 15, was hit in his right eye just after removing his face mask at the end of a paintball game in 2013. His cornea was cut and his lens had to be removed, followed by a second and then third operation. But 10 days after the last surgery, he developed high pressure in the eye and multiple hemorrhages in his retina. Finally, his vision recovered.Three of the five suffered long-term intraocular pressure and other problems.Most of the eye injuries are completely preventable, they wrote, urging that players should be required to wear protective goggles made of polycarbonate at all times in the facility.In addition, no shooting of the paintballs at the head or at close range to the body should be allowed, and there must be no drug use before the game. “Participants in paintball war games need to remember that an injury that would be trivial elsewhere in the body might be serious and irreversible when it involves the eye.”
Sign up for the Health & Wellness newsletter >>