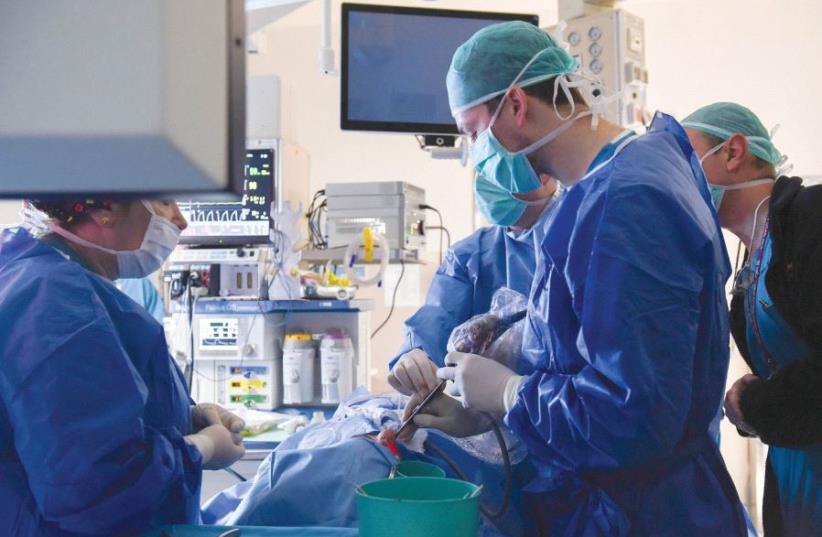 DR. MORSIO COHEN WEISER performs a Eustachian tube catheterization
(photo credit: COURTESY RAMBAM MEDICAL CENTER)
Advertisement
Catheterization of the coronary arteries and the blood vessels in the neck leading to the brain are common, but now Rambam Medical Center doctors have for the first time performed catheterization of the Eustachian tube connecting the middle ear and the nasal cavity.In fact, the procedure has just been performed on three men aged 19, 40 and 60 – one after the other. Catheterization of the ear canal is an operation to solve the problem of a decrease in hearing and fluid and pressure in the ear. About one in 10 Israelis suffers from the problem.Dr. Morsio Cohen Weiser, head of ear surgery at Rambam’s interdisciplinary center for head and neck medicine, and Dr. Dmitri Ostrovsky, of the eye and sinus surgery center, performed the procedures.Cohen Weiser said most problems in the ear canal are manifested in young children up to the age of seven because the Eustachian tube is very short at that age and liquid, especially milk in baby bottles, enters and causes problems.But in some people, these problems did not disappear at a young age, rather, they developed at a later age.“The problem is expressed by pain,” Cohen Weiser said, adding: “This is not a simple problem. It affects the quality of life of those who suffer significantly from it.”Unlike the insertion of tubes into the eardrum to release fluids, which is a temporary solution that needs to be repeated, the catheterization procedure can provide a permanent solution for patients.Cohen Weiser, who came to Rambam two years ago from Chile, has gained extensive experience in treating adults and children. In the future, the procedure is intended to be used in Rambam for children as well, and Cohen Weiser predicts that as the technology advances, it can replace pediatric ear tubes surgery.In ear-canal catheterization, an endoscopic is introduced through the nose to the blocked tube. The Eustachian tube has a piece of cartilage that in most cases is the source of the problem and where the expansion is actually performed. The expansion operation is done using a tiny balloon, which is inflated in a controlled and precise manner for only two minutes to leave an opening that is not too wide or too narrow. The treatment is done by special and special equipment, manufactured by the German firm Spiggle & Theis.One of Rambam’s first patients was Victor Baron, 40, from Kiryat Motzkin, who in 2002 dived into deep water and since then has had a blockage in his ear canal that has caused him discomfort and pain.After being treated several times by repeated tube operations, it was made clear to him that further surgery would not be possible due to the erosion of the eardrum due to multiple surgeries.He decided to go to Rambam for another opinion.“I met Dr. Cohen Weiser, who told me about the possibility of ear-canal catheterization as the first treatment of its kind in Israel,” Baron recalled. “Even though I hear much better,” he joked, “when my wife speaks to me, I sometimes pretend that the operation did not work very well.”
Sign up for the Health & Wellness newsletter >>