In 2015, the life expectancy in Israel stood at 82.1 years, placing Israel ninth globally. 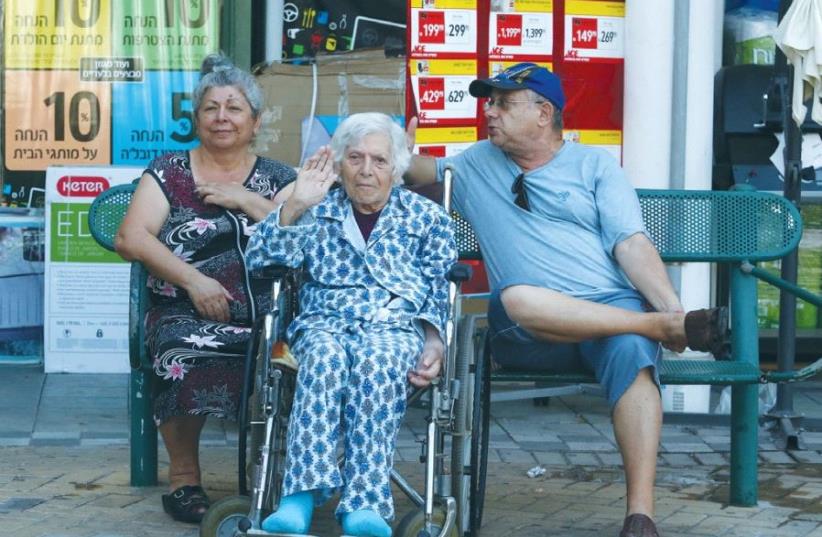 SENIORS ARE SEEN in Sderot. A baby born in Israel today can expect to live 71.7 years in good health, and about 82.1 years overall
(photo credit: MARC ISRAEL SELLEM)
Advertisement
Although the “Mediterranean diet” – with large amounts of fruits, vegetables, legumes and olive oil available – is natural to Israel and has proven health benefits, Israelis also tend to consume relatively high amounts of sugar and not enough whole grains.Almost half of Israeli children drink sugar-sweetened beverages every day – rates that are even higher than in the US.All this helps to make high sugar levels the most significant risk factor for disease burden here, and responsible for about 61% more disease burden than in Europe, after taking into account differences in the population age structure.Obesity is also a major problem in Israel (particularly among the country’s children) and causes about 21% greater disease burden here than in Europe.So says the report released on Monday morning by Jerusalem’s independent Taub Center for Social Policy Studies in Israel, not only on life expectancy but on the quality of life and how long people enjoy healthful lives.Report authors Liora Bowers and Prof. Dov Chernichovsky said that while the Health Ministry is now addressing the issue by prohibiting the sale of junk food products in schools, recommending labeling unhealthful products with clear and prominent labels, and limiting the marketing of unhealthy food for children, “a major problem facing the public is the high cost of a healthful food basket that contains sufficient fruits, vegetables, nuts and healthy oils, which is unaffordable for many.”In addition, according to the report, “food price regulations in the country are based on economic and agricultural considerations, with no input from the ministry regarding nutritional considerations.”The Taub Center study examines the years of healthy life in terms of disease burden – a measure that takes into account both disability/ poor functioning and death.The study compares Israel to other developed countries, highlights the impact of different health conditions on the country’s overall disease burden and outlines the challenges ahead.A baby born in Israel today can expect to live 71.7 years in good health – a figure that is about a decade less than total life expectancy (82.1 years).They found that healthy life expectancy is growing at a slower rate than total life expectancy.In addition, while disease burden from heart disease and lung cancer are notably lower than in other countries and the burden of heart disease and stroke has decreased by a remarkable 58% in the last quarter century, “obesity and high sugar consumption are greater risk factors here than in other countries, particularly among children.”Diabetes is responsible for nearly 90% more disease burden in Israel than in Europe, and its prevalence among the poor is substantially higher than that among higher-income individuals.Without major government regulations to promote healthy behaviors, particularly ensuring access to healthful foods and marketing of junk foods – with a specific emphasis on younger populations – Israel is set to experience substantial increases in disease burden in the coming decades, the authors warned.In 2015, the life expectancy in Israel stood at 82.1 years, placing Israel ninth globally.This figure remained fairly stagnant over the last few years and represents a fall from the country’s fifth place ranking in 2013. But while there has been a substantial increase in life expectancy over the last decades, this is no guarantee regarding quality of life. The rise in the number of years lived in full health and functioning has been slower than it should.“The data indicate that Israel faces a problem, and it is no longer possible to consider good health only in the context of life and death,” they wrote.“Contrary to conventional wisdom, when considering the many people affected and the duration of suffering, the burden caused on society by back and neck pain is even higher than that of heart disease,” they added. “The five conditions causing the greatest disease burden are neck and back pain, heart disease, diabetes, vision and hearing problems, and depression (in that order).“The burden of heart disease and stroke decreased by 58% since 1990 as part of a known international phenomenon attributed to better detection and treatment, as well as the development of new medications effective at lowering cholesterol and blood pressure.But on the other hand, an increase in body mass index and in diabetes rates has had the opposite effect and mitigated the reduction in heart disease that might have otherwise been seen.While there has been an overall decline in smoking rates in Israel over recent decades, a fifth of 10th-grade pupils have smoked a cigarette compared to 17% of their European counterparts, and the age of smoking initiation is earlier here than in the past.They concluded that “the common link across many of the leading health problems is lifestyle. By promoting better nutrition and physical activity, through food regulations and through designing healthy school and living environments, Israeli policy makers can proactively lengthen the years of healthy life. Ranging from back pain to diabetes to depression, the main way to ensure a healthier aging population down the road is to focus on prevention efforts, particularly on the young and those of lower socioeconomic status.”