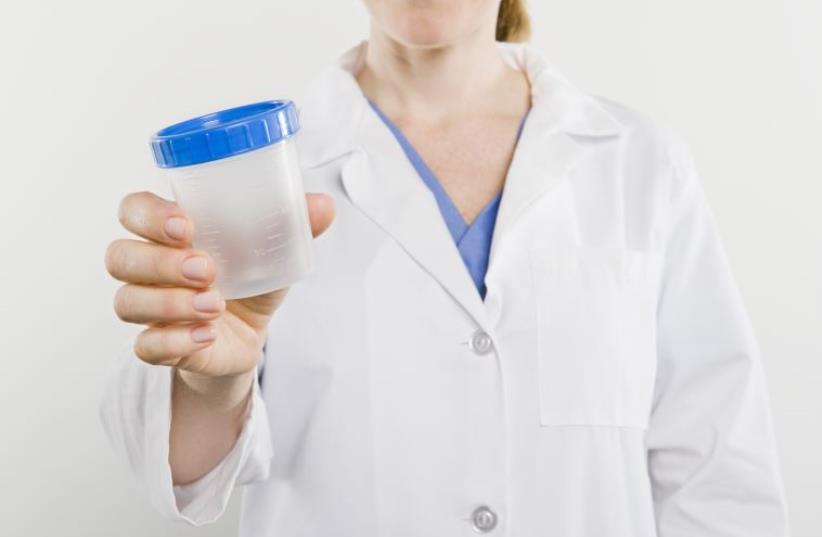 Doctor with sample
(photo credit: INGIMAGE)
Advertisement
The prevalence of deadly sepsis, which few in the general public have even heard of but affects both the developed world – including Israel – and the developing world, is increasing.World Sepsis Day is being held around the world on Tuesday to increase awareness of the condition, which has dramatically increased by an annual rate of between 8 percent and 13% over the last decade and now claims more lives than bowel and breast cancer combined.In the US the number of deaths from sepsis rose from 154,000 in 2000 to 207,000 in 2007, and the number of sepsis hospitalizations overtook those for heart attacks.Popularly but not accurately known as “blood poisoning,” sepsis is a life-threatening condition that occurs when the immune system damages tissues and organs while fighting an infection. The reaction causes widespread inflammation, leaky blood vessels and abnormal blood clotting. The results can be organ damage and, in severe cases, blood pressure drops, multiple organ failures and death from septic shock.Patients vary in their response. The severity of sepsis and the speed with which it progresses is affected by each patient’s genetic characteristics and the presence of coexisting illnesses, as well as the number and virulence of the infecting microorganism. Some patients do not deteriorate until late in their illness, in others sepsis progresses rapidly and can be fatal within a few hours.Prof. Charles Sprung, a longtime physician at the Hadassah-University Medical Center in Jerusalem’s Ein Kerem who spent decades fighting sepsis, noted that the best medical centers, mainly in industrialized countries, have doubled patients’ chances of survival, simply by recognizing the condition and responding rapidly. However, only 10% to 30% of patients with sepsis receive excellent care.Saving lives depends not just on treatments specific to a particular infection, but also on early recognition and awareness of sepsis, rapid antimicrobial therapy, resuscitation and vital organ support. In short, sepsis is a medical emergency and each hour matters, Sprung said. A better understanding of sepsis as the final common pathway of illness due to infection is essential to improving treatment. This applies to the medical profession, governments and the general public.Some infections that could lead to sepsis can be prevented through vaccination for diseases like influenza, pneumococcus and meningitis and also strategies to prevent infections are effective in reducing the burden of sepsis.While the Israel Medical Association spoke out on Sunday for the fight against sepsis, the Health Ministry said it was not involved in World Sepsis Day.Sepsis often occurs as a result of infections acquired both in the community and in hospitals and other health care facilities.The majority of cases are caused by common infections such as pneumonia, as well as infections of the urinary tract and skin, cellulitis in the legs and infections in the abdomen such as appendicitis. Invasive medical procedures like the insertion of a catheter into a blood vessel can also introduce bacteria into the blood and trigger sepsis.Normally, when we suffer a minor cut the area around it swells and becomes hot and red.This is the immune system in action. To fight any infection and to form a blood clot to stop bleeding, the body must get white blood cells and platelets into the tissues surrounding the cut. The body does this through inflammation, which is managed by the immune system.The blood vessels swell to allow more blood to flow, becoming leaky so that the infection- fighting cells and clotting factors can get out and into the tissues where they’re needed.The result is the typical hot, red swelling.Sepsis is best thought of as this process in overdrive, said Sprung. Inflammation is no longer localized to the “cut,” but is now widespread affecting all of the body’s organs and tissues. The body’s defense and immune system go into overdrive, leading to widespread inflammation, poor perfusion, organ failure and septic shock.Most types of microbes can cause sepsis, including bacteria, fungi, viruses and parasites such as those causing malaria. Bacteria are by far the most common culprit, but viral infections with seasonal influenza viruses, and the dengue and Ebola viruses may also progress to acute organ dysfunction and result in death from multiple organ failure and septic shock.The Global Sepsis Alliance which initiated the special day called on the world’s medical systems to place sepsis higher on government agendas and increase awareness of its growing medical and economic burden.It also demanded that sufficient treatment and rehabilitation facilities and well-trained staff are made available for the acute and long-term care of sepsis patients. It must be treated more effectively and prevented, the alliance added, noting that its goal is to reduce the incidence of sepsis around the world by at least 20% by 2020