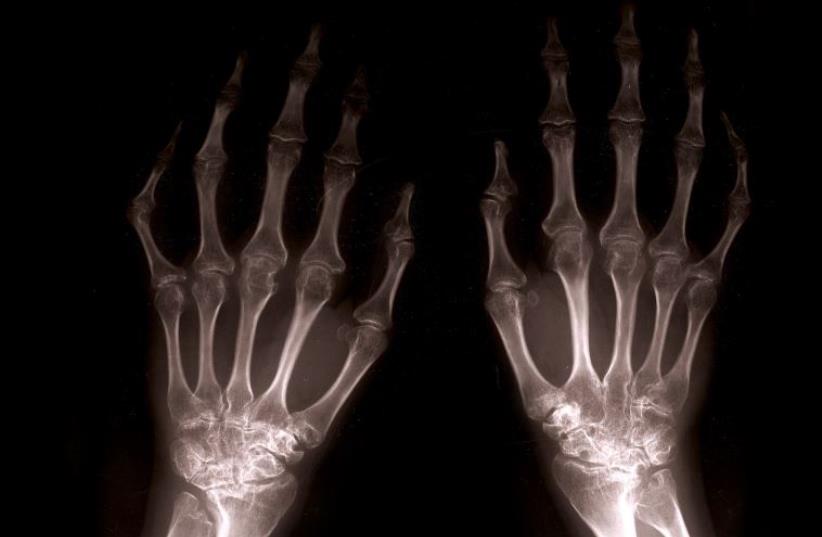 Close up of xray hands
(photo credit: INGIMAGE)
Advertisement
My 14-year-old son regularly cracks his knuckles. It drives me crazy. He says he doesn’t do it intentionally. Is it harmful to his health? What causes it, and does the person do it on purpose or does it just happen? W.N., Jerusalem Judy Siegel-Itzkovich comments: Research on this issue was recently presented at the annual meeting of the Radiological Society of North America.“It’s extremely common for joints to crack, pop and snap,” according to radiology professor Robert Boutin of University of California, Davis (UC Davis) Health System. “We were interested in pursuing this study because there’s a raging debate about whether the knuckle-cracking sound results from a bubble popping in the joint or from a bubble being created in the joint.”In the first study of its kind, researchers recorded simultaneous audio and visual evidence of knuckles cracking. Forty healthy adults – 17 women and 23 men ranging in age from 18 to 63 – were examined at UC Davis with ultrasound imaging, as they attempted to crack the knuckle at the base of each finger (known among doctors as the metacarpophalangeal joint or MPJ). The participants included 30 individuals with a history of habitual knuckle cracking and 10 without.While some participants stated that they had never intentionally cracked their knuckles, other participants did it frequently every day – up to 20 times daily for 40 years.Orthopedists blinded to the participants’ knuckle-cracking history evaluated the participants for grip strength, range of motion and laxity of each MPJ both before and after the ultrasound examination.Using a small transducer, a sonographer recorded video images of 400 MPJs, as participants attempted to crack their knuckles. The sonographer also captured static images of each MPJ before and after participants tried their hands at cracking.Two radiologists interpreted the ultrasound images, looking for sonographic evidence that would correlate with the audible cracks, which occurred in 62 of the 400 joints imaged.“What we saw was a bright flash on ultrasound, like a firework exploding in the joint,” said Boutin. “It was quite an unexpected finding.” Using the flashes on the ultrasound images, the radiologists were able to identify the joints with audible cracks with at least 94 percent specificity.“There have been several theories over the years and a fair amount of controversy about what’s happening in the joint when it cracks,” Boutin said.“We’re confident that the cracking sound and bright flash on ultrasound are related to the dynamic changes in pressure associated with a gas bubble in the joint.”As for which comes first – the cracking sound or the flash of light – Boutin said that more research is needed.The physical examinations revealed no immediate pain, swelling or disability in the knuckle-cracking group and no immediate difference in laxity or grip strength between the participants who cracked their knuckles and those who didn’t.“We found that there was no immediate disability in the knuckle crackers in our study, although further research will need to be done to assess any long-term hazard or benefit of knuckle cracking,” Boutin said.Do you know of any place in the country where a lactating woman can donate her breast milk? My daughterin- law gave birth a month ago, and the baby had to have an operation. The baby is still in the hospital and for some reason cannot tolerate her milk. But she didn’t want to waste it, so she is pumping her milk every three hours. We have a freezer full of bags of mother’s milk in special nursing bags with the date and time marked on them. I have tried finding a place to send them, including a voluntary mother’s milk bank in Bnei Brak, but the organizers there said the milk has to be in special containers. Has the Health Ministry a place to take mother’s milk and put it to good use? E.N., Givat Shmuel Health Ministry spokesman and deputy director-general for information, Einav Shimron-Greenboim, responds: The ministry has been talking about this for some time, and it intends to fund the establishment of such a national milk bank soon. We have already issued 17 pages of detailed guidelines, as the matter is very complicated. But this, unfortunately, will not solve the Givat Shmuel family’s problem.The guidelines deal with many matters, including setting criteria regarding which infants need it; who can work there; physical requirements for the bank; how to handle the milk from pumping until it is given to the infant (including handwashing by the donor and pasteurizing, freezing and defrosting of the milk); signing forms for donations; checking the health and lifestyle of the donor and what medications she takes; saving samples for testing and management of milk supplies.Rx for Readers welcomes queries from readers about medical problems. Experts will answer those we find most interesting.Write Rx for Readers, The Jerusalem Post, POB 81, Jerusalem 9100002, fax your question to Judy Siegel-Itzkovich at (02) 538-9527, or e-mail it to [email protected] jpost.com, giving your initials, age and place of residence.
Sign up for the Health & Wellness newsletter >>