Subjects are divided between environment and life sciences; history and social sciences; technology and computer sciences; and natural sciences and math. 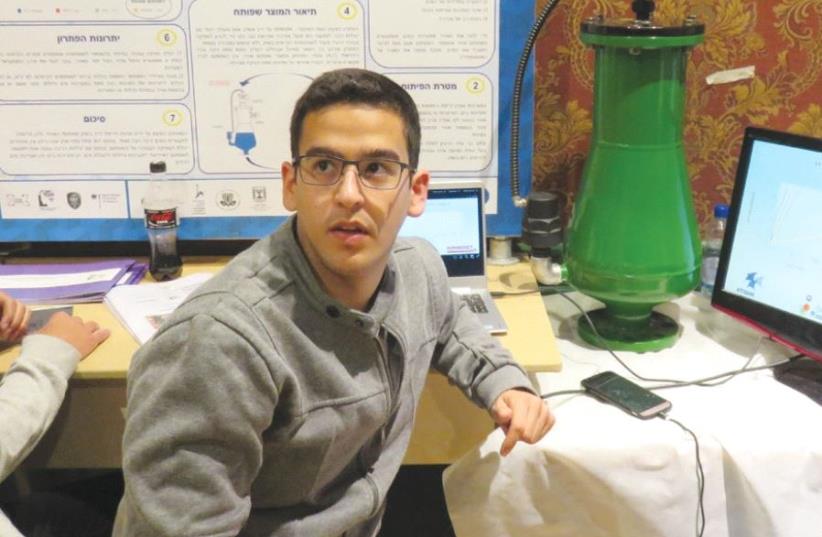 High-school contestants sit in front of project displays at the Intel-Israel Young Scientist Competition at Jerusalem’s Bloomfield Science Museum on March 20, 2017
(photo credit: JUDY SIEGEL-ITZKOVICH)
Advertisement
A wide variety of subjects – ranging from “Jewish Misogyny in the 12th and 13th centuries” to “How to Reduce Salinity in the Kinneret” to “Artificial Intelligence in Games of Luck” – were tackled by high school students at the Intel-Israel Young Scientist Competition this week at Jerusalem’s Bloomfield Science Museum.The competition is the 20th in the museum’s 25 years. The competition for college scholarships reaches a higher level of difficulty every year, requiring greater levels of competence. Subjects are divided between environment and life sciences; history and social sciences; technology and computer sciences; and natural sciences and math.The teenage contestants appeared fully conversant with their projects, both theoretically and practically, when responding to questions from the judges.Some subjects were so distant from the Israeli high-school curriculum – such as “Conquests of the Mongolian Empire and their Influence” – that one might wonder what enticed the youngsters to investigate them. Others topics had practical repercussions, such as a device to make cardiovascular resuscitation more accurate and effective, and ways to introduce drugs into dental implants to make recovery faster.The winners will go abroad to compete in the Intel-International World Young Scientist Competition. With the $15 billion purchase of Israel’s Mobileye company on their minds, the youngsters must have looked forward to launching startups based on their own ideas.This year, 35 girls and 31 boys were named finalists. Winners will be announced on Tuesday.