Ariel University advice to students: Read out loud what you have learned from written text; write down text you have heard to remember better. 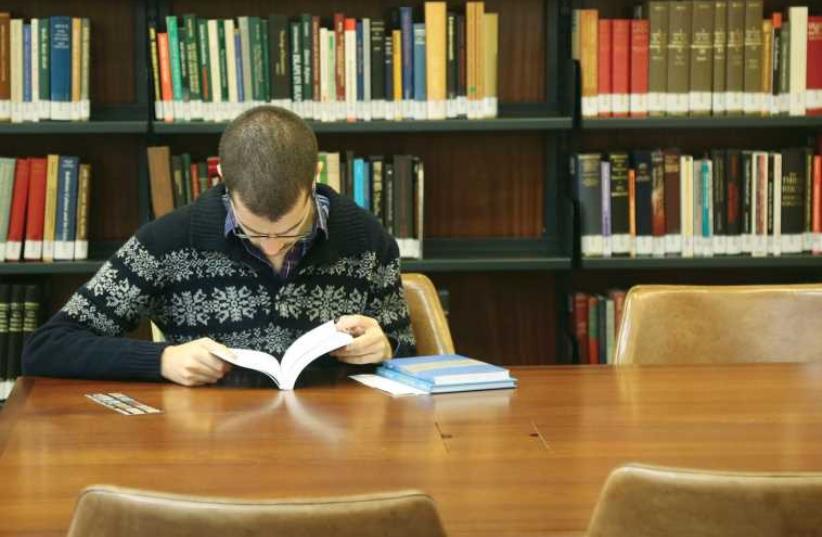 A student at Jerusalem’s Shalem College.
(photo credit: MARC ISRAEL SELLEM/THE JERUSALEM POST)
Advertisement
If you have to remember something written that you learned, read it out loud; if you want to recall something that was said, write it down. That is the tested advice of researchers at Ariel University.Dr. Michal Icht of the communications disorders department and Dr. Yaniv Mama of the behavioral science department gave this advice to students before the end-of-semester exams began. The study was published recently in the journal Memory.Reading material out loud is more effective when the material to be digested is written in a book or notebook, but when the information was heard in a lecture or lesson, putting it down on paper or typing it up is more effective, they explained, adding that their advice works for both children and adults.They based the advice on their study of the “production effect,” a technique that improves memory by some 20 percent. Written words that are read out loud are remembered more effectively than when said when moving one’s lips without any sound coming out.In a series of experiments, written words were presented before students, one at a time. Some participants in the study recalled some of them orally and the others only read them silently. Many studies have in the past shown that producing words by saying them out loud instead of silently improves memory.Icht and Mama said that the production effect is explained by the fact that saying written words involves numerous types of information processing, including seeing, speaking, sensing by moving the lips and hearing;, and thus it is preferable to reading silently.Just moving the lips uses one sense only, so memory of the data is weaker.But the Ariel University researchers expanded their investigation to including hearing. They sounded out the words instead of presenting them as written text. This is similar to learning by hearing, which occurs frequently in daily life, for example by listening to the radio or a lecture.In a series of trials, some words were learned only by listening, some by listening and saying them out loud and others by listening and writing them down.During the test, participants were asked to recall the words.Surprisingly, the researchers said, those words that were written down were remembered significantly more than those that had just been heard.The more senses involved, the researchers said, the better they are recalled.
Sign up for the Health & Wellness newsletter >>