Taub Center says Israel is ‘unprepared’ to deal with elderly 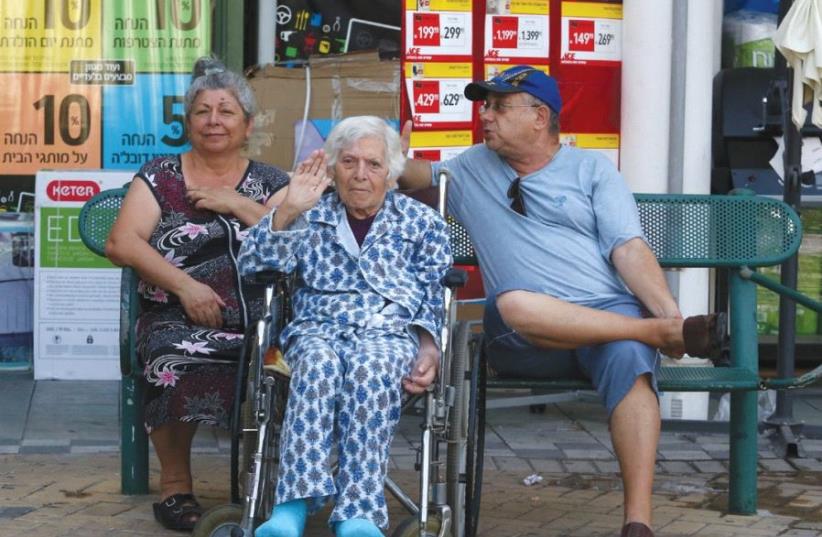 THERE ARE 610,000 elders aged 75 and up in the country today. The figure is expected to double to 1.24 million by 2035.
(photo credit: MARC ISRAEL SELLEM/THE JERUSALEM POST)
Advertisement
With the share of Israelis 70 and over expected to double in the coming decades, the needs for long-term care among this generation will increase significantly – challenging an unprepared health-care system.According to a study at Jerusalem’s Taub Center by health economist Prof. Dov Chernichovsky, Prof. Avigdor Kaplan, Eitan Regev and Prof. Yochanan Shtessman, the country’s long-term care system is inequitable and inefficient, and the share of private funding in Israel is three times higher than the OECD average. Only half of spending on long-term care is publicly funded, and responsibility for the area is spread across several ministries.The authors offer several solutions for restructuring long-term care, including the option of defining long-term care, which is not solely for the elderly, as part of a universal basket of coverage that is protected by law and managed by a designated authority.Today, there are 610,000 elders aged 75 and up. The figure is expected to double to 1.24 million by 2035, while the rest of the population is expected to grow by about 31%. Thus, the study concludes, the disability level – which is by nature higher among the elderly – is expected to grow by 43%. This growth rate is 16% faster than that of the general population during this time period.“While the increased life expectancy among Israelis is a welcome development, it requires better preparation for the growing health needs of those who are living longer.Illness and functional impairment drive a growing need for in-home care and, in more severe cases, inpatient nursing homes. The changing ratio between the younger and older age groups is expected to worsen the challenges related to caring for one’s parents and increase the burden on Israeli households.The study for the first time also compares the long-term care system in Israel to those in OECD countries and propose potential solutions to regulating the market for long-term care here.The Taub Center study found that Israel’s total national expenditure on long-term care – including community care, institutional care and premiums on long-term care insurance – was NIS 15.3 billion in 2014, and the government covers only about half of this expenditure.Long-term care is divided among the National Insurance Institute, the health and labor and social services ministries and the four health funds.“The fragmentation of responsibilities between the different ministries leads to inefficiency and hurts the continuity of care,” the study said. “Most importantly, this leads to suffering among elderly Israelis and their families. Furthermore, the right to institutional care is not universal but rather is means-tested, leaving behind the middle class households that are not poor enough to qualify for financial assistance for long-term care, but are not wealthy enough to afford privately funded assisted living facilities.”The study found that compared to the OECD, Israel – which has a younger population on average – is not effectively distributing or providing care given the resources it allocates. In addition, the share of private expenditure on care is nearly 45%, almost triple that of the OECD, which stands at 16% on average.This extensive reliance on households furthers inequality between families at different income levels: households that are unable to afford long-term care at home or in assisted living facilities must bear the burden on their own.The Finance Ministry prefers to transition long-term care insurance that is based on group premium payments (through pensioner associations and workplaces) to a system that revolves around individual premium payments.However, the Health Ministry prefers universal long-term care insurance by raising the health tax by 0.6% and transferring the full responsibility of long-term care to the health funds, thus reducing the burden on families.But the Taub researchers argue that “the two proposals fail to address the fundamental issue in the area of long-term care – the selective entitlement to institutional care and the split among the various agencies involved in organizing and providing long-term care.”The Finance Ministry’s approach, “has not proven effective in other parts of the world. The funding available through a private insurance system is relatively limited, as low-income earners cannot afford the premiums and high-income earners often prefer to make other arrangements, such as paying for in-home care.The Health Ministry’s approach is “compatible with international trends and suitable in terms of public finance,” said Chernichovsky, but it lacks certain basic elements.“This proposal focuses on the medical aspects of long-term care without meeting other needs such as social support. In nearly all other OECD countries, long-term care is managed separately within the welfare system, not in the healthcare system, so it doesn’t sufficiently address fragmentation in the Israeli system and the funding sources that are required in order to expand long-term care.”