Thursday’s deal represents the third expansion since 2012, and the last protocol led to 100 export transactions with over $1.1 billion. 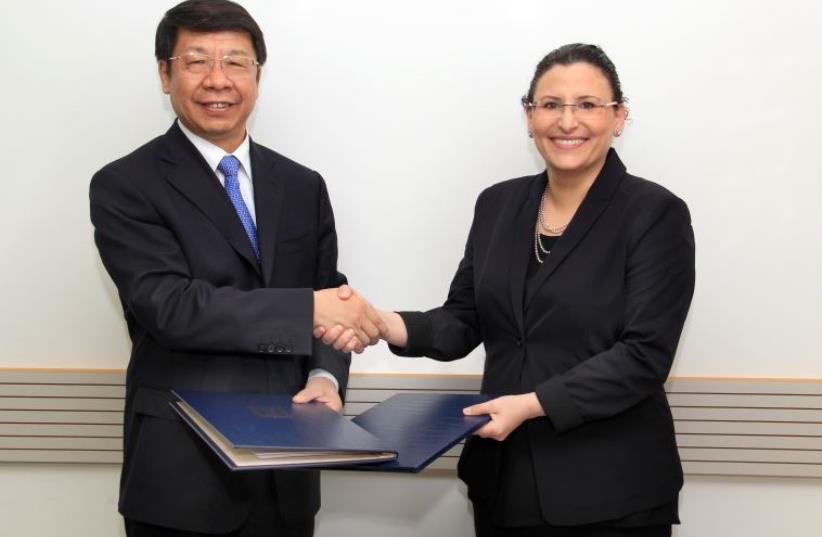 Israel and China sign finance agreement
(photo credit: FINANCE MINISTRY)
Advertisement
Israel and China on Thursday signed an agreement to expand by $500 million a financial protocol that helps finance Israeli exports to China.The financial protocol, which since its inception in 1995 has reached a total of $2.6 billion, insures lines of credit Israeli banks issue for Chinese companies purchasing Israeli goods.Most of the transactions, according to the Finance Ministry, are in health and medical devices, although education, transportation, communications, infrastructure and agriculture are also included.Thursday’s deal represents the third expansion since 2012, and since 2010 it has led to 100 export transactions worth more than $1.1b. in total.“The third expansion of the financial protocol between Israel and China is a further measurement for tightening the relation between the two countries and indicates the success of the protocol in opening the Chinese market to Israeli companies,” Finance Ministry Accountant-General Michal Abadi-Boiangiu said.“The policy of using state guarantees to support growth-generating targets is reflected in the expansion of the protocol, which will lead to the increase in the Israeli exports, thus benefiting employment, GDP and tax revenues,” she said.Israel has identified expanding markets in Asia as one of the main potential growth engines for Israel’s economy.The Economy Ministry is working toward negotiating a free-trade agreement with China.On Monday, Economy Minister Arye Deri met with Chinese Ambassador to Israel Zhan Yongxin to discuss the establishment of a free-trade zone.Such a deal would further boost trade between the two countries, which has reached $6b. a year.The ministry’s Foreign Trade Administration already has the same number of trade attachés in China as in the United States.But the news comes on the heels of a shock to China’s economy, as a bubble in its stock market came crashing down in recent days.More than 25 percent has been knocked off the value of Chinese shares since mid-June. For some global investors, the fear that China’s market turmoil will destabilize the financial system is now a bigger risk than the crisis in Greece.“We are inclined to believe that Beijing will escalate policy responses until they start working,” Credit Suisse economists said in a research note.China’s malfunctioning stock markets remained semi-frozen, with the shares of about 1,500 listed companies worth around $2.8 trillion (roughly half the market) suspended, with many of those still trading propped up by state-directed buying.The US has voiced concerns that the stock-market crash could get in the way of Beijing’s economic reform agenda.