The constant influx of cheap foreign labor is one reason that Israel's construction sector was among its least productive. 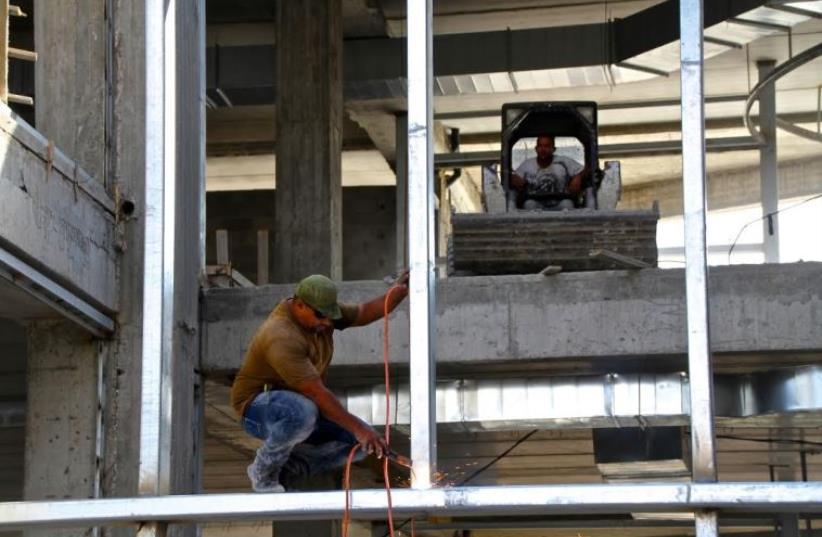 Construction workers build new mall at the Gush Etzion junction in the West Bank
(photo credit: TOVAH LAZAROFF)
Advertisement
Israel is set to sign an agreement with the Ukrainian government to provide thousands of Ukrainian construction workers with temporary work visas for Israel, the Population and Immigration Authority announced on Wednesday.The construction industry has long lamented the shortage of cheap, skilled labor needed for building, and has often pointed to the scarcity as a reason for long building times, which have held back housing supply and contributed to the high cost of housing.Already, Israel “imports” about a quarter of its 235,100 construction workers. In that sector, the government has issued permits for 3,300 workers from China, 1,000 from Bulgaria, 150 from Romania, and 2,800 from Moldova, which will be sending another 2,000 in the coming months.Palestinians still make up the majority of the foreign construction force, accounting for some 42,000 workers (Israel also allows foreign workers in other fields; hundreds of Jordanian workers have permits to work at Eilat and Dead Sea resorts, and 20,000 Thai workers are employed in Israeli agriculture.) But not everyone agrees that the key to better building is more labor.In January, Bank of Israel Governor Karnit Flug said that the constant influx of cheap foreign labor is one reason that Israel’s construction sector was among its least productive.The combination of cheap foreign labor and a lack of competition – which the Finance Ministry is attempting to address by allowing foreign construction companies to operate in Israel – has left the industry “very dependent on non-advanced technological ways of production,” Flug said, adding that the building methods in Israel were “ancient.”On Tuesday, the Histadrut Labor Federation argued against further efforts to boost foreign labor in Israeli construction, saying it was dragging down wages for the Israeli workers in the industry.