In both Israel and abroad, about one-third of the bee population has disappeared. 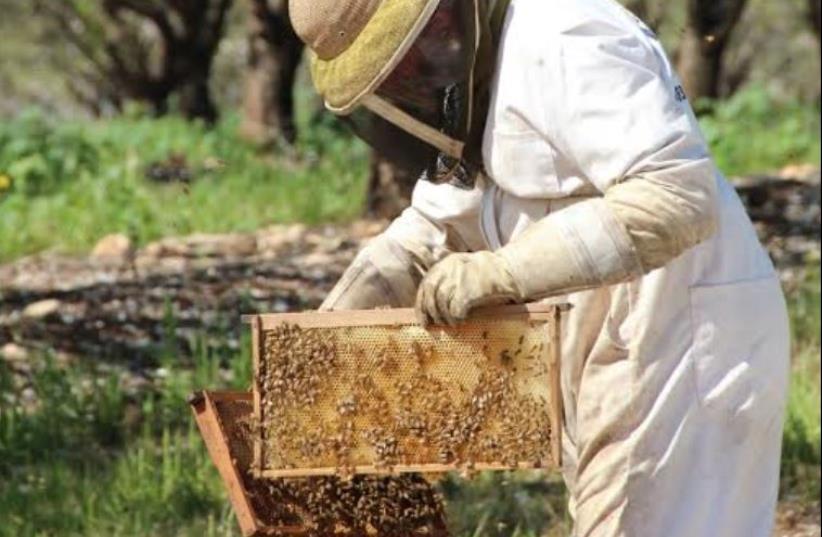 A beekeeper removes a honeycomb frame from a bee hive
(photo credit: ADVA OFIR)
Advertisement
As Rosh Hashana approaches, the Israeli Honey Council warned that local production of the sweet substance would lag far behind domestic consumption needs for the year. The approximately 100,000 beehives scattered around Israel are expected to generate about 3,000 tons of honey, similar to long-term annual production averages and the 2,900-ton figure from last year, according to Honey Council CEO Herzl Avidor. Nonetheless, Avidor warned that Israeli annual honey consumption amounts to about 4,000 tons of honey – with about 1,600 tons marketed over the High Holy Days – necessitating foreign imports to supplement local production. "The rainy winter brought high expectations among beekeepers of a big increase in the annual honey output, but after winter came a particularly cold spring, which reduced the volume of nectar during flowering," a statement from the council said. "In addition, the phenomenon of the disappearance of bees is expanding and is leaving its mark on the ground." However, due to the fact that this year’s summer honey output is expected to be better than that of last year, the Honey Council forecasted an annual production level within the scope of the long-term average.Honey marketed during the High Holy Days is valued at about approximately NIS 50 million and constitutes about 40 percent of Israeli annual consumption of the substance, Avidor explained. During the month of Tishrei, the average Israeli consumes about 200 grams of honey on average, he added. One problem with the need to import additional honey is that honey produced at home is usually cheaper than the products imported from overseas, according to the Honey Council. In addition, the council warned, low-priced honey can be indicative of poor quality or sometimes even fake honey, made of a mix with sugar. Cheap and low-quality honey can also pose a risk to human health, the council added.Because it can often be difficult to distinguish quality from fake honey in appearance and taste, the Honey Council said it operates in conjunction with the Health Ministry a voluntary monitoring program, in which about 70% of Israeli honey producers participate. "Consumers can rest assured when buying honey marked with the quality symbol of the Honey Council, they have purchased quality honey and not a fake product with only artificial color and sweetness," Avidor said.  Although Israel imports plenty of high quality from abroad through legal trade agreements with the European Union, the United States and South America, illegal, poor quality imports also occur from many Eastern countries such as China, the council said. As a result, consumers must be extra vigilant when purchasing the product during the holiday season. In Israel, there are currently some 500 beekeepers operating the 100,000 beehives around the country, of which about 60,000 are placed in agricultural growing areas to simultaneously serve as pollination tools. All in all, honeybees in Israel contribute about NIS 2.5b. to the annual agricultural GDP by working as pollinators, the Honey Council said. Nonetheless, in both Israel and abroad, about one-third of the bee population has disappeared – a phenomenon that the Honey Council described as great cause for "concern about the future of food production in the world."An ongoing Honey Festival, taking place to promote awareness of the bee industry and bee disappearance, will continue through September 12. Sponsored by the Honey Council, the festival involves public events at a number of beehives around the country. More information is available on the council’s website.