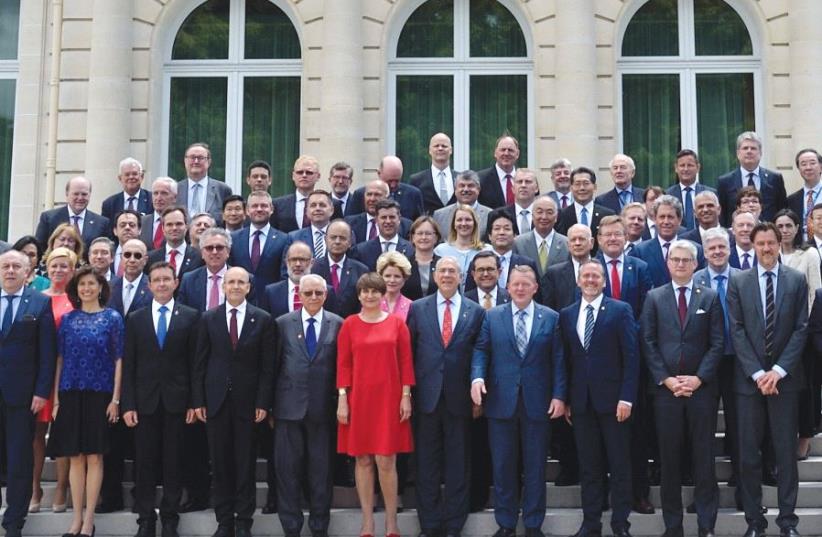 FINANCE MINISTER Moshe Kahlon and his counterparts smile at the OECD Ministerial Council meeting in Paris yesterday
(photo credit: OECD)
Advertisement
After a strong 2016, the economy is expected to continue to grow this year and next, despite a slow start, an OECD report revealed on Wednesday.Expanding 4% in 2016 following a surge late in the year, growth is expected to hover around 3.5% in 2017-2018, with inflation firming up gradually and wages projected to rise, according to the OECD Economic Outlook for 2017.Looking at how the country might ensure this growth, the report identified Finance Minister Moshe Kahlon’s “Net Family” tax cut program as a critical tool.Due to a sharp increase in public spending, the budget deficit is expected to rise to 2.9% of GDP in 2017 and 2018, following a 2.1% deficit in 2016, the report said. While this budgetary expansion is only likely to stimulate growth moderately, it could foster a more inclusive economy by increasing spending on housing for young families and on transport, according to the OECD.“These developments would be further enhanced in the event that the additional measures, worth some 0.3% of GDP, recently announced by the minister of finance (but not included in the projections) to increase the employment rate of parents of young children and raise invalidity pensions were to be adopted,” the report said.The measures in question – known as the Net Family program – aim to significantly improve the net wages of working parents of children six years old and younger.At the beginning of May, the Knesset approved a portion of the program, authorizing an increase in tax credit points for these parents. In addition, the plan calls for benefits such as subsidies for after-school activities, expansion of work grants and reduced taxes on baby clothes, mobile phones and shoes.The OECD report predicted that inflation would rise gradually and stand at around 2% by 2018, in light of an expected rise in wage levels. In the real estate sector, the report acknowledged that price increases have slowed and remain at about 5% yearon- year, but stressed that this market requires government attention in order to maintain a robust banking sector.“The OECD published today indicates that Israel’s economic is a strong economy, with low unemployment and high growth expectations,” Kahlon said on Wednesday. “In the OECD they saw fit to refer to the Net Family program as a program that is expected to raise the employment rate of parents of young children and increase pension benefits. We will continue to lead the Israeli economy with responsibility and determination, with the policy of a free economy and with compassion and social sensitivity.”Later in the day, on Wednesday night, Kahlon signed the Multilateral Convention on issues of taxation, alongside some 60 ministers from around the world, at the meeting of the OECD Ministerial Council Meeting in Paris.The convention aims to prevent international corporations from avoiding taxes, which typically occurs through techniques such as exploiting tax havens, or jurisdictions that offer favorable tax conditions.“Over the years, the tax planning system has become more sophisticated and it enables multinational corporations to divert their profits to tax havens with great efficiency, while using gaps in tax legislation to avoid paying taxes,” a statement from the Finance Ministry said. “This phenomenon threatens the scope of tax revenues and the fairness of tax payments in many countries around the world.”As a result, the G20 Forum, in cooperation with the OECD, initiated the Base Erosion Profit Shifting (BASE) program, to combat such behaviors. The program includes a package of measures for implementation in domestic law and as provisions in tax treaties, in order to uproot this phenomenon.Because the convention adopted by the parties on Wednesday will serve to amend or replace more than 3,000 existing tax treaties, the OECD initiated a multilateral instrument (MLI) to implement the measures. The MLI covers issues such as prevention of treaty abuse, transparency, dividends, land possession, transfer prices and agreement and arbitration proceedings.Israel will be applying the MLI to all of its existing tax treaties, as well as two forthcoming treaties with Armenia and Azerbaijan, for a total of 56 treaties, the Finance Ministry said.Following the signing of the Multilateral Convention on Wednesday night, the countries will begin their internal ratification processes, the ministry said.