Fujitsu Limited has announced the establishment of a data security R&D center in Tel Aviv, following its launch of an innovation hub in the south of Israel in 2021.

On Monday, Japanese corporate monolith Fujitsu Limited revealed its plans to open a new center for research and development in Tel Aviv, which will accelerate the recruitment of world-class talent to promote innovation in the fields of data and security.

Set to open in April 2023, the new R&D center will enable Fujitsu to strengthen its presence in Israel with a team of experts recruited in the country alongside researchers from Japan and Europe. The center will be dedicated to strengthening communication network security technologies, as part of Fujitsu‘s global strategy for data security, which is one of the five key technology areas in the company’s global research and development strategy.

The company’s latest Israeli venture comes on the heels of its establishment of the “Fujitsu Cyber Security Center of Excellence in Israel” at Ben-Gurion University of the Negev in 2021.

“As one of the most technologically advanced countries in the world, Israel offers Fujitsu a rare concentration of talent and a supportive environment to promote innovation,” said Fujitsu Limited CTO Vivek Mahajan, while visiting Israel during the center’s establishment.

“I look forward to the recruitment of additional local researchers who will join our team in Tel Aviv, deepen the collaboration with Ben-Gurion University and contribute to the advancement of our mission: increasing security and trust in network technologies,” he said. “I anticipate that the new teams in Israel will work with our global research network to play a central role in leading the development of Fujitsu’s future AI and security technologies.”

Israel and Japan are making quite a few moves

Fujitsu is but one of many Japanese corporations making moves within the Start-Up Nation. Earlier this week, Japanese auto and motorcycle parts manufacturer Musashi Seimitsu announced a $20 million investment in the innovation hub of Israeli AI robotics company SIXAI. Through the investment, the company aims to advance its collaborative development of Artificial Intelligence and Electric Vehicle technology. 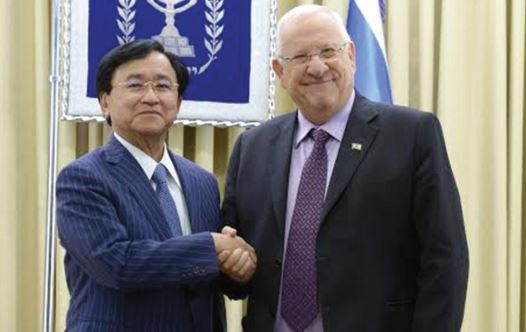 Speaking about the viability of Japanese-Israeli cooperation, Musashi Seimitsu CEO Musashi Otsuka stated: “We found out that the diversity in culture between Israelis and Japan actually provides productivity and a fruitful discussion. At the beginning it was scary, because it took some time for the employees to really understand each other. But I can tell you today there is harmony because each party brings its strengths to the table. There are new things that are being created within this combination. In other words, one plus one equals much more than two.”

Similarly, Takashi Kai, Head of Mitsubishi Corporation’s Tel Aviv liaison office, lauded the compatibility of Israeli and Japanese business culture earlier this year. “Japanese corporations fall short in agility. Mitsubishi is a very big company, something like a dinosaur. We are too slow, and sometimes conservative, so we fall short of the standard of agility. We have so many complicated and lengthy internal procedures to even make a $1 million investment in something,” he said.

"We have so many complicated and lengthy internal procedures to even make a $1 million investment in something.”