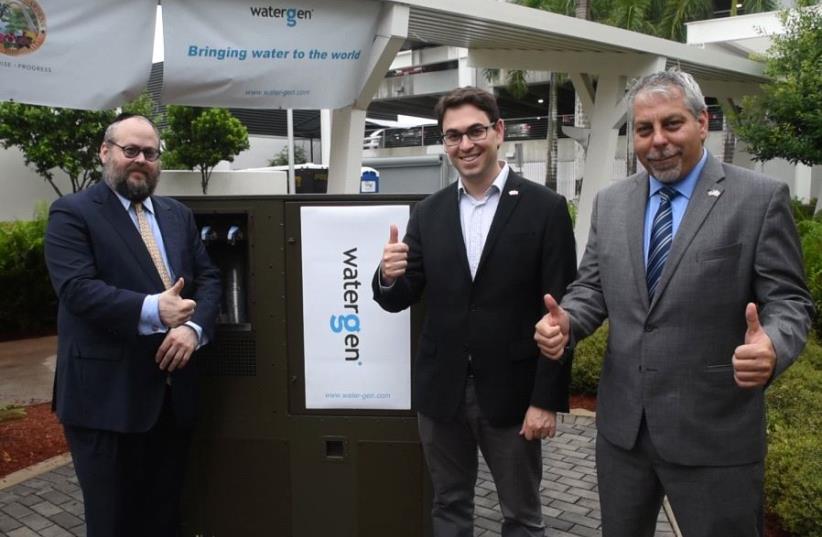 Florida Water-Gen
(photo credit: MENDY STUDIO)
Hoping to help curb the severe drought that has overtaken South Florida in recent years, the suburb of Miami Gardens is partnering with an Israeli company that generates water from thin air.Miami Gardens Mayor Oliver G. Gilbert III announced the beginning of a pilot program on Monday that will demonstrate the use of the air-to-water generating technologies developed by Rishon Lezion-based Water-Gen. Over the next two weeks, the city will test out the company’s mid-size unit, a device that extracts water from airborne humidity and dispenses clean drinking water.“We are excited to demonstrate to the citizens across Florida Water-Gen’s forward-thinking and innovative solution that will benefit each and every household and family,” Gilbert He continued: “As representatives responsible for the quality of life and safety of our communities, preparedness and readiness to counter crises is mandatory. Water-Gen’s pilot will enable us to measure its use for clean drinking water if needed for hurricane relief and any other emergency water situation that may arise.”Due to the ongoing drought, residents of the area are under significant water restrictions, including a ban on watering outdoors from 10 a.m. to 4 p.m., a statement from Water-Gen said. In addition, the Florida area is currently bracing for hurricane season, which typically lasts from June through the end of November.In March, more than 170,000 South Floridians were affected by a precautionary advisory to boil their water, as a result of a power outage at a local water plant, the statement added. Florida obtains much of its drinking water from the Floridan Aquifer and the Biscayne Aquifer, as well as from surface water sources like Lake Okeechobee, but population increases have begun to strain available resources.Water-Gen’s technology first made waves at the AIPAC Policy conference in Washington at the end of March, when Prof. Alan Dershowitz presented the company’s device on stage and pulled water out of thin air. Trapping humid air on-demand, the device cleans and dries the air and extracts the resultant clean water. The company bills itself as a far more affordable option than other systems that have tried to extract water from air, as the heat exchanger in the device is made from plastic rather than from aluminum. Generating 1 gallon (3.79 liters) of water requires only 1 kW of energy, according to the firm.Water-Gen’s system is available as the medium-scale model being used in the Miami Gardens pilot, a home appliance for household use, and a large-scale industrial water generator with a capacity of up to 6,000 liters of water per day.While Miami Gardens will host the company’s first US city pilot program, the company recently was the only Israeli private sector participant in a US Army drill in May.“By generating the water directly from the air, Water-Gen has developed an independent, innovative and autonomous solution, requiring only electricity and no infrastructure,” said Water-Gen president Yehuda Kaploun. “This quick and easy solution allows Water-Gen to respond immediately to the rapidly unfolding water crisis and any emergency situation. We are ideally positioned to enable communities to tap into a clean and safe drinking water source with a refreshing taste.”
Sign up for the Business & Innovation Newsletter >>