Intuition Robotics, known for developing the Elli•Q aging companion, announced on Tuesday that the company received a $14 million investment in a Series-A financing round. 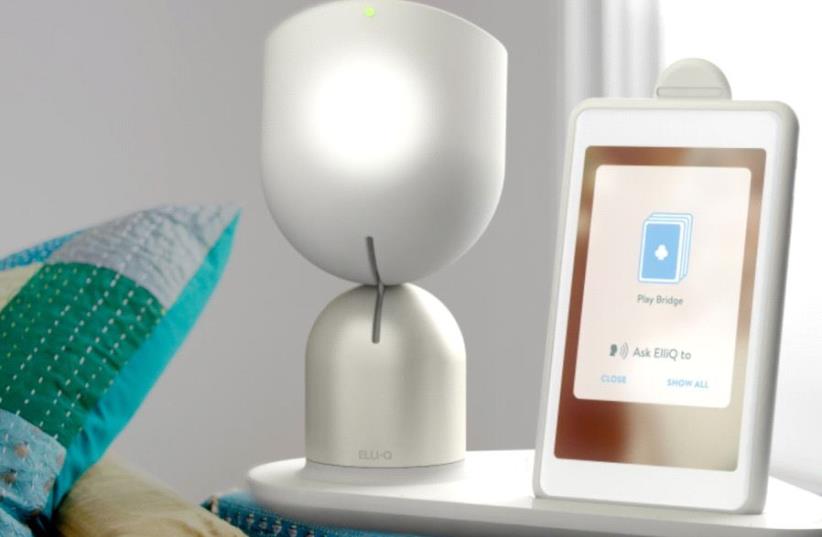 The Elli•Q aging companion from Intuition Robotics
(photo credit: Courtesy)
An Israeli-developed robotic companion is one step closer to helping older adults connect to their families and stay active, following a significant investment round led by Toyota Research Institute.Ramat Gan-based Intuition Robotics, known for developing the Elli•Q aging companion, announced on Tuesday that the company has received a $14 million investment in a Series-A financing round. A white, faceless robot that can sit on a living room side-table next to an accompanying screen, Elli•Q employs artificial intelligence to help older adults chat with friends, listen to or watch digital content, keep track of appointments and take advantage of recommended activity ideas."We are honored that TRI believes in our approach to help older adults stay connected and engaged through our first product, Elli•Q , the active aging companion,” said Dor Skuler, CEO and co-founder of Intuition Robotics. “This strategic investment illustrates our joint beliefs in the potential of social robotics in keeping older adults connected and engaged and in overcoming the digital divide using cognitive computing and natural communications.”As the leader of the $14m. investment round, the Toyota Research Institute joins other early A-round investors in Intuition Robotics such as OurCrowd and iRobot, as well as existing seed investors like Maniv Mobility, Terra Venture Partners, Bloomberg Beta and other private entities. The investment markets Toyota Research Institute's first outside investment in robotic technology specifically aimed toward older adults, according to the Israeli company. “We are impressed with Intuition Robotics’ thought leadership of a multi-disciplinary approach towards a compelling product offering for older adults including: Human-Robot-Interaction, cloud robotics, machine learning and design," said Dr. Gill Pratt, CEO of Toyota Research Institute. "Specifically, we believe Intuition Robotics’ technology, in the field of cognitive computing, has strong potential to positively impact the world’s aging population with a proactive, truly autonomous agent that’s deployed in their social robot, Elli•Q.”The Intuition Robotics technology is currently in a prototype phase, and the company has already established a manufacturing line in China, Skuler told The Jerusalem Post on Sunday. After continuing to test the usability of Elli•Q – whether older adults are able to engage with the robot and use functions like the voice interface – the firm will be receiving its first units off the manufacturing line, to conduct value proposition tests in the United States, he said.Intuition Robotics will be conducting those tests with dozens of older adults who come either from a waiting list on the company’s website, or are affiliated with several elder care organizations that the firm is working with in California, Skuler added. The participants in the study need not have any technological expertise, he explained. "The whole goal of Elli•Q is to help bridge the digital divide and make the use of technology simple and intuitive,” Skuler said. “We're looking for people who are independent or live at home, but we're not looking for people that are technologically savvy." One particular advantage of Elli•Q is that the robot is proactive, suggesting activities that the individual user may enjoy, according to Skuler. In addition, Elli•Q uses body language, moving in order to convey meaning and standing out from devices like Amazon’s personal assistant Alexa, he explained. The robot also sits side-by-side with a screen and employs lights and sound effects for a more intuitive experience, he added. “We try to mimic those same traits that we use as humans and apply those to Elli•Q,” Skuler said. Thus far, Skuler said that he and his colleagues have found that older adults are not shying from the idea of an active aging companion. “The value that people can extract from technology is very clear to older adults, whether they use technology or not,” he continued. “A big part of the value proposition is helping them leverage and exploit what technology has to offer them in a way that’s simple and intuitive for them to use.” Elli•Q has a number of goals, offering users a means of communication through messenger or video chatting as well as engagement with accessible content like audiobooks, lectures and music, Skuler explained. In addition, the robot helps the older adults remain independent by assisting them with daily activities like arranging a schedule, ordering rides and reminding them to take medications, he said. The device also offers wellness monitoring, which can be turned on or off by the user, Skuler added. Some such functions include alerting family members if the individual has not woken up by 9 a.m. if a typical wakeup time is 6-7 a.m., or if stovetop gas has been left on accidentally, he said. However, Skuler warned, Elli•Q is not a safety device and does not detect falls or contact emergency services. As such, the robot is going to be marketed as a consumer product and not as a medical device, he added.As Elli•Q’s launch gets closer and closer – which the company hopes will occur in 2018 – Skuler said that the active aging companion also has personal meaning to himself and his co-founders. As adults in their 40s with aging parents, they envisioned Elli•Q as a helpful tool even within their own families.“When we set out to build this company, we were hoping that we could help our parents’ age [group] with the dignity and respect we know they deserve,” Skuler said. “Also, we are not getting any younger.”
Sign up for the Business & Innovation Newsletter >>