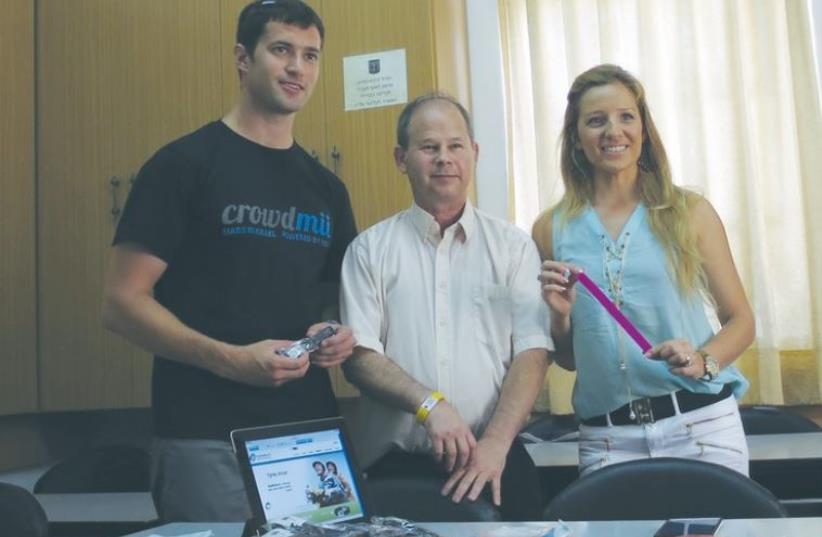 ASSAF LUXEMBOURG (left), CEO of Crowdmii, Eli Gorodezer, the head of MyMDband, and Magi Rozinger-Gasiorowsky, from the Helping Hand Coalition
(photo credit: Courtesy)
Advertisement
Free medical wristbands for Holocaust survivors
MyMDband is a sleek wristband with a personalized QR (Quick Response) code that includes emergency medical information accessible to medical personnel anytime, anywhere. The new Israeli startup Crowdmii has begun distributing its wristbands for free to Holocaust survivors around the world as part of its crowdfunding campaign also called “Crowdmii” (short for “crowd made in Israel).MyMDband is suitable for senior citizens and people with chronic illness or allergies. The startup is working together with the Helping Hand Coalition, which distributes food, clothing and financial grants to Holocaust survivors, as well as coordinating social events for the survivors. Together, MyMDband and Helping Hand are galvanizing the support of many organizations and communities worldwide (Jewish and non-Jewish).Last Friday, 35 Holocaust survivors who live in Tiberias were the first people to receive the gift of a free MyMDband, following a donation from Keren Poriya. About 190,000 Holocaust survivors currently live in Israel, 25 percent of whom unfortunately live below the poverty line.A total of 1,500 MyMDband wristbands will be distributed to survivors free of charge during this campaign.Survivors interested in receiving a free wristband can find details at www.crowdmii.com. The campaign will continue until the end of September.“We would like to thank Keren Poriya and the Helping Hand Coalition and all of our supporters for helping with this important cause,” said Assaf Luxembourg, CEO of Crowdmii. “Crowdmii will continue helping Israel’s friends abroad to support Israeli initiatives so that we may continue to be a ‘light unto the nations.’” Ahavnu
A new Israeli website called Ahavnu is trying to combine the world of online purchasing with the act of doing good deeds. Founded by Shoshi Oren and Eliav Alaluf, Ahavnu is a place where people can purchase Israeli designer clothing and accessories such as Naftul and Sarah Braun, from which 30% of the purchase amount is donated to a charity of the buyer’s choice. Krembo Wings, One in Nine, First Hug and Beit Kobi are a few of the non-profits participating in the initiative.When the sellers receive payment for their products, they immediately transfer 30% of the amount to the requested charity and a receipt for the donation is sent directly to the customer, which can be used for tax purposes. Purchases arrive directly to the customer by courier within three business days of purchase and there is a money-back guarantee for all purchases.A beta site will be launched in the upcoming days.Oren is the founder of Shilav and TinyLove, and Alaluf is a partner in the marketing firm Like and Share.Neither one will receive any financial compensation for their involvement in this initiative. The two of them launched a Headstart crowdfunding campaign in which they plan to raise NIS 48,000 within 30 days. So far, they’ve raised 50% of the amount.Participants invest a specific amount of money and then later receive the equivalent in products. In this case, of course, 30% of their investment will be donated to charity.New olim in hi-tech
Gvahim,  an organization established by the Rashi Foundation, helps new olim find work by matching them with mentors in their field, setting them up in internships, placing them in business incubators and introducing them to other olim. On Tuesday, Gvahim held a meet up in Tel Aviv for entrepreneurs and professionals who’d made aliya over the years.Gvahim CEO Gali Shahar ran the evening along with Patricia Lahy-Engel and Tal Kelem, the directors of TheHive, a startup accelerator in Tel Aviv and Ashdod. At the meet up, a number of veteran olim discussed what is required for new immigrants to succeed as entrepreneurs in Israel and how to become an active part of the startup nation.Here is a list of the speakers: Steven Katz is an investor from EMC Ventures. In earlier days, he was considered one of the youngest senior analysts on Wall Street. He is a former board member of Vertex Venture Capital and CIBC World Markets.Jonny Stark is an entrepreneur and founder of Secret Tel Aviv, the largest international community in Israel which has more than 80,000 members who benefit from lists of job openings, tickets for shows, dating services, and recommendations for entertainment venues.Cynthia Phitoussi is founder of See IL, an investment club that works with investors looking to invest in young and promising startups in Israel.Bob Rosenschein is an American-Israeli serial entrepreneur who founded answers.com, which he sold for $127m. He has also founded another three successful companies.His current startup is Curiyo, which offers information on the web on a variety of subjects.Jimmy Levy is founder of Galil Software, the largest software company in Israel based in the Arab sector, employing 130 engineers.Together with CEO Inas Said, Levy won the Prime Minister Prize for Entrepreneurship and Innovation for their pioneering success in opening a hi-tech company in the Arab sector. Levy was also a former VP at Comverse.Astorre Modena is the founder of Terra Venture Partners, which focuses on startups in the field of renewable energies and water technologies in Israel.Ben Lang is the founder of Mapme, which creates community-based maps using the wisdom of crowds.Oleg Korol is a young serial entrepreneur and a graduate of the TheHive’s first incubator. He is the founder of Tevatronic, which creates innovative technologies in the field of irrigation.If you run a young startup, have developed an interesting app or have a question, please feel free to contact info@ social-wisdom.com.Translated by Hannah Hochner.