A number of Israeli companies participated in the show this year. 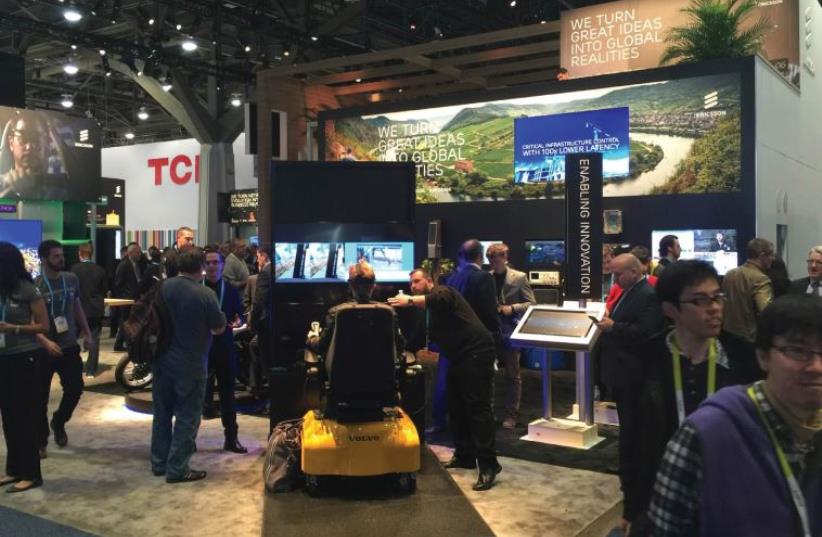 MORE THAN 200,000 visitors from around the world came to Las Vegas to see the latest innovations and consumer products, including a number of Israeli companies
(photo credit: ARIEL SHAPIRA)
Advertisement
LAS VEGAS – This year, CES Las Vegas was, as Donald Trump says, HUGE. More than 200,000 visitors from around the world came here to see the latest innovations and consumer products. Since there were so many companies presenting, the events took place in several locations simultaneously, which demanded quite a bit of time and effort to get to them all.A number of great Israeli and international companies participated in the show this year. Here are my top picks from the event: Humavox Humavox’s technology enables a wide variety of household containers, such as cup holders, drawers and boxes, to be transformed into a wireless charging station. Simply toss your Humavox-enabled fitness band into a box and charging begins. This year at CES, Humavox will bring wireless charging to life with an interactive demonstration that will visually and physically present how wireless charging can integrate seamlessly into our daily lives in every way imaginable at home, the office and outdoors.InfinityAR InfinityAR has pioneered its solution for augmented- reality headsets and is now bringing its inside-out marker-less orientation and positional tracking into the virtual-reality world. InfinityAR’s inside-out simultaneous localization and mapping (SLAM) solution for VR headsets is based on over-the-counter RGB stereo cameras and low-cost inertial measurement units (IMU). InfinityAR’s engine enables vendors of VR headsets to reduce their cost, reduce motion to photon latency and reduce power consumption by way of using the inside-out orientation and positional tracking approach.“We are proud to extend our AR algorithms and engine to the VR world,” InfinityAR CEO Motti Kushnir said. “Our advancements in technology allow the VR community to enjoy more affordable and more powerful headsets, opening up the mass market so that everyone now has a chance to experience the world of AR and VR.”

The world’s first full high-definition 360-degree camera, cam 360, is prepped and ready for the emergence of virtual reality. Equipped with three wide-angle lenses and three built-in microphones, the 360-degree camera seamlessly connects every angle within its view without the use of external software.Being Wi-Fi enabled, cam 360 allows for captured photos and videos to immediately be stored in the cloud and easily shared on its app.StoreDot StoreDot is a nanotechnology pioneer that introduced the world to a battery that can charge your smartphone in 30 seconds and your electric vehicle in five minutes. At CES Las Vegas 2016, StoreDot invited visitors to witness the company’s latest achievements: StoreDot revealed a new demo of its fast smartphone charging solution, which brings us one step closer to the final product that will hit markets in 2017.StoreDot also unveiled MolecuLED, an innovative display technology made from organic materials.WonderVoice Unlike other voice-interaction interfaces, Wonder- Voice works as your personalized voice assistant for social networking, messaging and other useful apps.WonderVoice exclusively offers deep, hands-free interaction that is not confined to a limited number of apps defined by your OS provider. WonderVoice includes intelligent interaction with your favorite and fundamental apps, such as Facebook, Twitter, Spotify, You- Tube, Glympse and Pocket, as well as services aiming to help drivers, such as vacant-parking detector and sharing of location.StikBox StikBox was founded in 2014 by Yekutiel Sherman, who had a vision of creating a single solution that is a combination smartphone case and selfie stick. If you have StikBox, you don’t need to carry each separately.StikBox is a multifunctional smartphone case that transforms into a full-length selfie stick that can also be opened as a phone stand.Lima Lima created an affordable, secure and easy-to-use solution that allows users to build their own secure personal cloud. Lima’s specially designed hardware adapter, combined with its powerful software, seamlessly connects with users’ devices, enabling them to transform their hard drives into personal and secure clouds. When adding a file to Lima, it automatically keeps a copy on the hard drive that is attached to the Lima adapter. For people on the go, Lima is your own personal cloud whenever you need it and wherever you are.Mass Fidelity Mass Fidelity delivers beautifully designed and inventive audio products. Designed by the makers of The Relay, The Core is a high-quality wireless speaker with holographic sound that produces cinematic sound with smooth highs, crystal-clear midrange and bone-shaking bass. It uses an acoustic holography technology to produce a stereo sound field that is astonishing in size and sound quality. It is like listening to a pair of high-end speakers, except it is coming from a device that is small enough to hold in your hand.Pluto TV Pluto TV is a startup that is taking a huge leap toward becoming the ultimate, free Internet TV service, with a brand new look and feel. The Pluto TV team is transforming the television industry as we know it.Skyroam Skyroam is the only single solution that delivers instant access to mobile Wi-Fi in Asia, Europe, America, the Middle East, Africa and the South Pacific. This is made possible by its patented virtual SIM (vSIM) technology that automatically connects you to a local carrier for unlimited daily usage. If you travel to a new country, the Skyroam Hotspot automatically switches to a local carrier; you don’t need to configure the SIM in your smartphone or go looking for a hot spot. Other solutions require roaming SIMs, local SIMs or SIM stickers, but Skyroam does not require complicated configuration or unlocking of smartphones to work.And unlike connecting to risky open-public Wi-Fi, the Skyroam Hotspot is secure and helps prevent malware infection and data loss.If you run a young startup, have developed an interesting app or have a question, please feel free to contact [email protected] social-wisdom.com.Translated by Hannah Hochner.