Tech Talk: The year of women in science and technology

The Science Ministry and the Council for Higher Education decided to carry out this campaign in an effort to boost women’s participation in science-related fields. 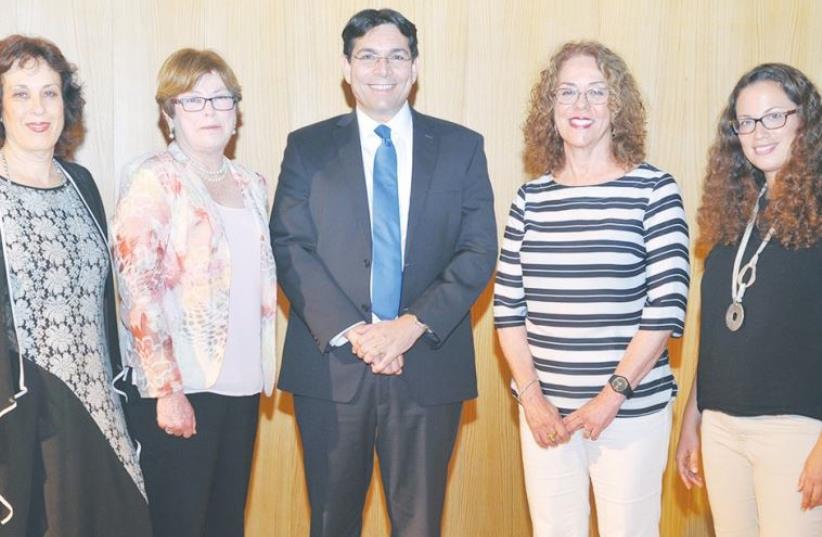 SCIENCE, TECHNOLOGY and Space Minister Danny Danon is flanked by (from left) Science Ministry Chief Scientist Nurit Yirmiya, Intel Israel CEO Maxine Fassberg, Ben-Gurion University of the Negev President Rivka Carmi and Alljobs founder Revital Hendler
(photo credit: BARAK VIDO)
Advertisement
The Science Ministry has officially named 2015 the year of women in science and technology. On July 14 it launched an extensive public-relations campaign that will be led by a number of leading women scientists.The Science Ministry and the Council for Higher Education decided to carry out this campaign in an effort to boost women’s participation in science-related fields. Women lecturers in universities comprise only 29 percent of the teaching staff and 39% in colleges. Women comprise 11% of the lecturers in mathematics and computer sciences and 13% in natural-sciences departments. The future does not look promising either, since females comprise between 25% and 31% of science students at colleges and universities.Science, Technology and Space Minister Danny Danon officially launched the campaign at a festive event attended by Ben-Gurion University of the Negev President Rivka Carmi, Science Ministry Chief Scientist Nurit Yirmiya, Intel Israel CEO Maxine Fassberg and Alljobs founder Revital Hendler.“I intend to push through legislation that would offer incentives to colleges for increasing the number of women learning at their institutions,” Danon said.A number of young women scientists who are researching interesting subjects from unique angles were chosen to participate in the public-relations campaign, including Dr. Hagar Landsman, who is researching the composition of dark matter by using a unique telescope to look at the South Pole, where she lived for a period of time; Dr. Ronnie Kamai, from the Ben-Gurion University Department of Structural Engineering, who researches structures’ earthquake readiness; Dr. Karina Yaniv, from the Weizmann Institute of Science, whose research on zebra fish led to new discoveries of the lymphatic system in fetuses; and Dr. Bat Chen Revital Avraham-Lubin, from Ariel University of Samaria, whose research examines the DNA of grape vines in an effort to find vines from Biblical times.Want to track your kids’ smartphones? Do you have little kids or teens? During the summer vacation, kids tend to spend way too much time on tablets and smartphones.Data published by the National Council for Children’s Welfare show that kids between the ages of 12 and 17 surf the Internet an average of four hours a day, mostly on the family computer. We all know that the Internet offers endless pornographic and violent sites, as well as chat rooms with pedophiles just sitting and waiting for the next victim to innocently log on, so what can we do to keep our children safe? Israeli company Fixico offers a solution that enables you to control the content of what your family members watch on the computer through an app you install on your smartphone. This app allows you to limit the sites available, check which apps have been downloaded on your kids’ smartphones and even upload or delete apps from your kids’ phones remotely.Also, if you want to keep tabs on where your kids are at any given time, or if you’re worried the phone might get lost, Fixico’s app can help you do this, too. If you’ve misplaced you’re phone, you can activate the ringer remotely even if the phone is on silent.Sodexo offers quality of life The next time you need a package brought by messenger to your office or want to locate a restaurant, try out the new app called MySodexo.More than 4,000 restaurants across the country will now let you pay your bill using Sodexo Pay, so you can go out to eat without even taking your credit card with you.Sodexo has been researching wellness at the workplace and during after hours for organizations and public institutions and is using its conclusions to improve the quality of its products.For the launching of its new app, Sodexo created a humorous video clip called “Why stay hungry?” It shows what happens in a typical office when it gets close to lunchtime and everyone’s stomachs start growling. Between July 15-31, all Sodexo app users can participate in a raffle for which the first-place prize is a three-day trip for two to Paris, including round-trip flights, a hotel stay and two culinary tours led by pastry chef Sharon Heinrich, who has been living in Paris for over four years and is a chocolate expert.If you run a young startup, have developed an interesting app or have a question, please feel free to contact info@social-wisdom.com.Translated by Hannah Hochner.