‘Tell us how you made Israel’

The Jewish state’s quest to form lasting partnerships through agricultural cooperation around the world. 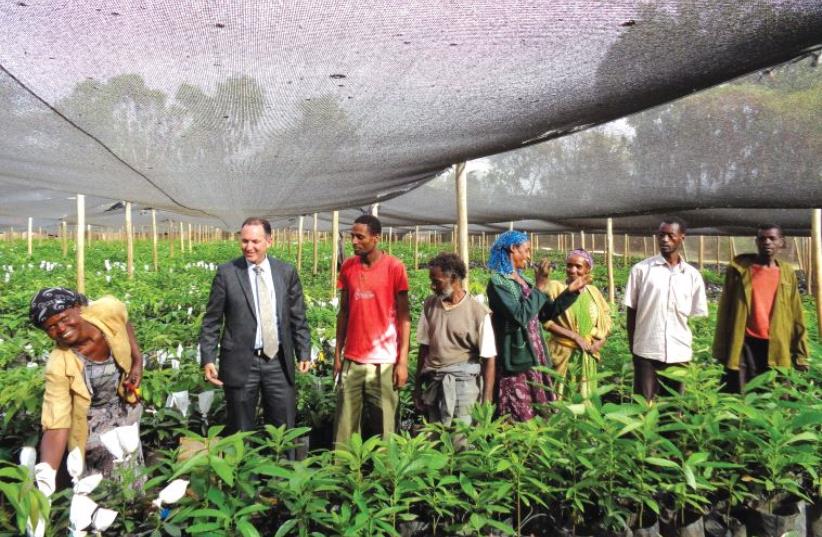 MASHAV head Gil Haskel (second from left) visits a MASHAV nursery for avocado trees in Ethiopia, March 2016
(photo credit: GIL HASKEL)
Surrounded by an inhospitable mix of barren desert and malaria-ridden swampland, the fledgling State of Israel had little food with which to sustain its increasingly hungry inhabitants.Fast forward a mere six-and-a-half decades, and the Little Country that Could is not only nourishing its own eight million citizens, but is also helping developing countries around the world do the same.“We are the only country in the world that has come to such a high development stage in such a short period of time; it’s a miracle,” Yakov Poleg, head of the Agriculture Ministry’s CINADCO: The Center for International Agricultural Development Cooperation, told The Jerusalem Post, in a recent interview at his Beit Dagan office.“The beauty is that Israel is willing to share all its development achievements with other nations,” he said.Israel began its quest to become a key player in the international development sphere in 1957, with the launch of Foreign Ministry’s MASHAV (the Hebrew acronym for Israel’s Agency for International Development Cooperation). The creation of MASHAV was the result of then-foreign minister Golda Meir’s trip to Africa – a visit that strengthened Israel’s commitment to partnering with emerging nations in the neighboring continent.“We were a country of refugees. There was a sort of austerity in Israel, but we transformed rather quickly to an OECD country – one of the 35 most developed economies in the world,” Gil Haskel, head of MASHAV, told the Post.Along with the country’s growth into a modern state, Israeli technological demonstrations and training programs – in the sectors of agriculture, public health, education and women’s empowerment, among others – gradually began to appear around the globe.In today’s agriculture sector in particular, government programs piloted by MASHAV and its professional arm CINADCO have been implemented all over Asia and Africa, focusing on horticulture, dairy and irrigation.Countless Israeli private companies that specialize in farming technologies are involved in many of these projects and in their own independent ventures.Since its establishment, MASHAV has trained some 270,000 participants from 132 countries in its various courses both abroad and in Israel – of which about 70% involve agriculture. While some of the instruction occurs in a traditional classroom setting, the Israeli government agency has gone out into the field, setting up a unique array of fully functioning farms around the world.“Project-wise, we established from the very beginning demonstration agricultural farms all over Africa,” said Haskel, who served as Israel’s ambassador to East Africa from 2011 to 2014. “It intensified in the beginning of the ’90s when we established relations with new countries.”Chief among them were India and Vietnam, while relations with Thailand received a significant upgrade, Haskel explained.India: making up for lost time Perhaps Israel’s greatest agricultural success story on a government-to-government level is its partnership with India, which has led to hands-on collaborations with farmers all over the subcontinent.Prior to the establishment of official diplomatic relations in 1992, ties between Jerusalem and New Delhi were far from friendly, following a period that Haskel described as “44 years of lost time.”“When we established relations with India, we started thinking about how to maximize lost time,” he said.In 1996, the two countries first discussed establishing a demonstration farm in New Delhi, to exhibit Israel’s agricultural technologies, according to Haskel, who served as deputy ambassador to India from 1994 to 1998.“As we went on, the Indians came and said, ‘We don’t only want the technologies – we want the entire value chain. Tell us how you made Israel,’” said Haskel. “Then the phrase ‘Center of Excellence’ came into being.”Haskel was referring to a unique set of holistic farming facilities that do not only showcase Israeli expertise, but also promote “the entire value chain from the R&D to the implementation of the actual technologies.”Out of this mutual aspiration – and a memorandum of understanding signed in 1996 – grew MASHAV’s largest venture in the world to date, the Indo-Israel Agriculture Project, launched in 2008.“India specifically is a country that is confronting developing challenges, scarcity of water and food security challenges,” Daniel Carmon, Israel’s ambassador in New Delhi, told the Post.Stressing that India does not fall into the OECD category of an Official Development Assistance country, Carmon explained that Israel was invited by India to share its technologies in an intergovernmental partnership to build the Centers of Excellence.The Indo-Israel Agriculture Project is the combined effort of a number of bodies, from both the Israeli and Indian governments. On the Israeli side are MASHAV, CINADCO and the Israeli Embassy in New Delhi. On the other side is Indian Agriculture Ministry’s Mission for Integrated Development of Horticulture, as well as many Indian state and federal governmental bodies.“We are cutting, adapting and pasting the Israeli farms to the Indian scene,” said Carmon, who previously served as the head of MASHAV from 2011 to 2014 and ambassador to the United Nations from 2005 to 2010.The Indo-Israel Agriculture Project has been evolving in three stages, with the first occurring from 2009 to 2012, the second from 2012 to 2015 and the third in 2015-18.Thus far, the project boasts 26 Centers of Excellence either operating or in the works, with 15 already fully functional, according to Dan Alluf, counselor for international cooperation for the Israeli embassy and MASHAV. 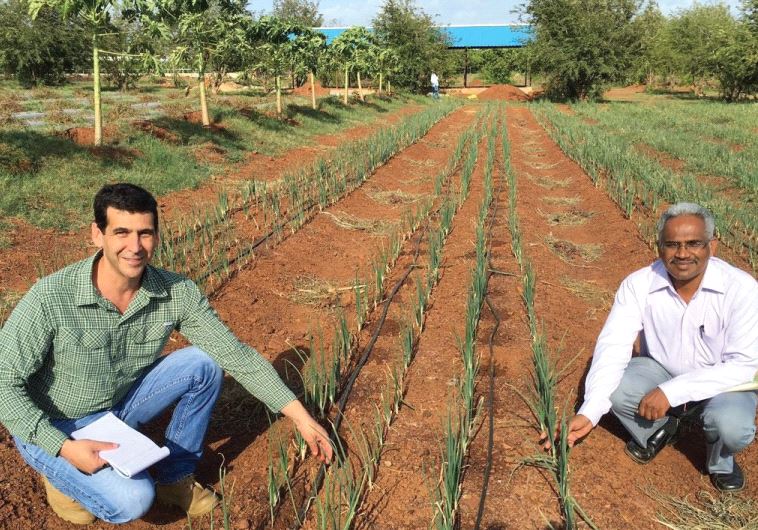 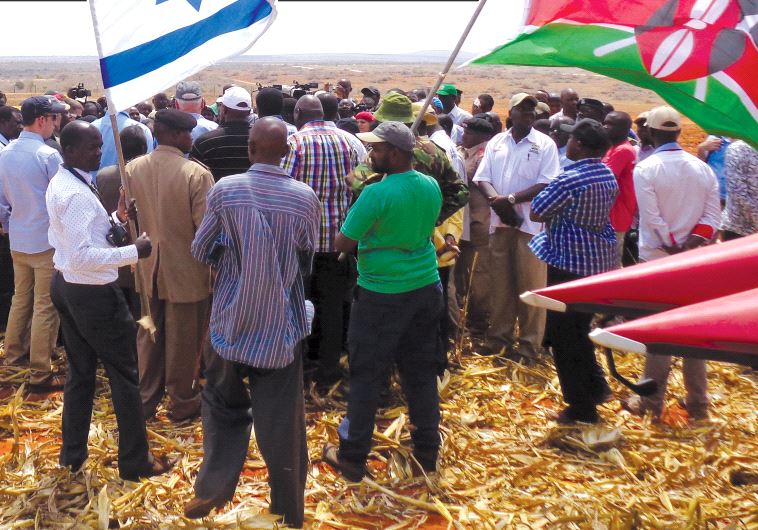