The technology works on-demand by trapping humid air inside the device, then cleaning and drying the air and extracting the resultant clean water. 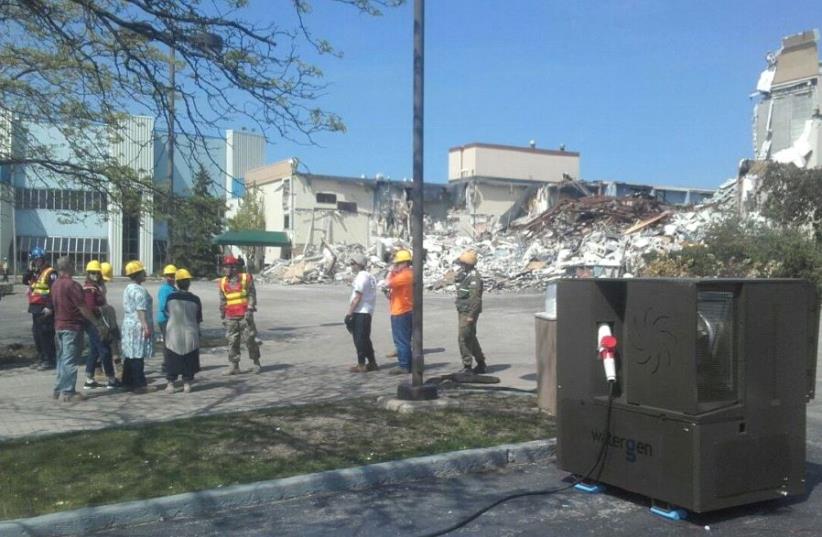 Water-Gen machines during US military drill
(photo credit: COURTESY OF WATER GEN)
As rescue forces head into disaster sites, all too often they struggle to maintain a steady water and food supply.An Israeli firm known for generating water out of thin air – the Rishon Lezion-based Water-Gen – participated in a United States Army drill last week, testing its ability to help overcome such critical challenges.During a five-day simulation in Indianapolis and Chicago, rescue units employed the company’s technologies while saving victims trapped in hotel buildings that collapsed due to tornadoes.As the emergency forces worked to rescue their victims, they had access to Water-Gen’s medium-sized 350 gallon model water generators, which were stationed at the scene, according to the company. The generators provided a constant supply of water to both the rescue workers and the victims, the firm explained.“This experience is invaluable for us, from the training with military personnel to the understanding of how all the emergency organizations work together,” said Maxim Pasik, chairman of Water-Gen.Water-Gen’s “GENius” technology first made waves at the AIPAC Policy conference in Washington at the end of March, when Prof. Alan Dershowitz presented the company’s device on stage and pulled water out of thin air. The technology works on-demand by trapping humid air inside the device, then cleaning and drying the air and extracting the resultant clean water, Pasik told The Jerusalem Post in an April interview.Because the heat exchanger is made from plastic rather than aluminum, as has been typical in other such systems that extract water from air, Water-Gen’s technology is much more affordable, he said. Generating 1 gallon of water requires only 1 kilowatt of energy, he added.The system is available as the medium-scale model used in the US Army demonstration, a home appliance for household use and a large-scale industrial water generator with a capacity of up to 6,000 liters of water per day.While Water-Gen was the only Israeli private sector participant in last week’s simulation, ZAKA’s International Rescue Unit and the National Search and Rescue Unit of the IDF’s Home Front Command also participated, the company said.“Water-Gen and ZAKA emergency preparedness training is ever-evolving, and we thank the US military for ensuring we are more prepared to save lives and offer relief efforts if needed,” Pasik added.Aside from the US Army, among the Americans involved in the simulation were a specialized unit from the Federal Emergency Management Administration (FEMA), a National Guard regional unit, the Chemical Biological Incident Response Force of the US Marine Corps and delegates from a variety of other authorities.The program “is an opportunity for members of the military and local responders to share best practices for critical tactics, techniques and procedures in response to natural disaster,” a statement from the Indiana National Guard said.