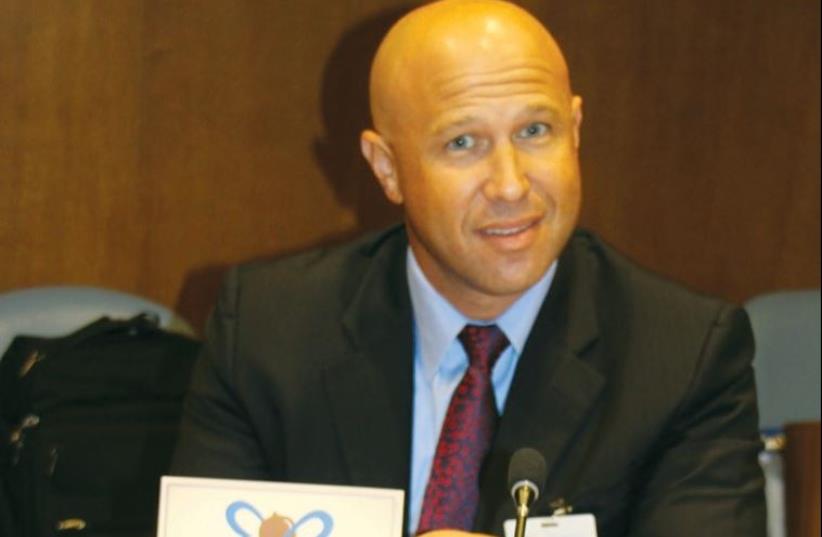 Businessman Nir Brunstein.
(photo credit: Courtesy)
Advertisement
Make-A-Wish Israel Make-A-Wish Israel, which grants the wishes of children diagnosed with life-threatening medical conditions, hosted a public art auction last week at the Dan Acadia Hotel in Herzliya. The evening began with a cocktail party, after which guests were invited into the large hall for the auction, which was hosted by Jennifer Roth, executive VP at Sotheby’s New York. The event was initiated and organized by Batia Ofer, a long time ambassador of good will of the foundation, who joined Alon Segev and Sigal Mordechai, head of Sotheby’s Israel.Denis and Avi Bar Aharon, founders of the Make-A-Wish Israel also welcomed the guests. Attending the event were Idan Ofer, Rakefet Russak-Aminoach and her husband Reem, Chemi Peres, Racheli and Leon Koffler, Liora Ofer, Udi Angel, and Boaz Schwartz.Cukierman and Go4Israel Investors, diplomats, and senior business executives from Israel and abroad took part in the opening cocktail hour at the annual Go4Israel conference, at Shablul at the Tel Aviv Port. The aim of the conference was to encourage foreign investors from around the world to create partnerships with Israeli companies.The evening was hosted by Edouard Cukierman, chairman of Cukierman and Co. Investment House, a partner of the Catalyst Fund and the son of Roger Cukierman, who is president of CRIF, the umbrella organization of the Jewish community in France, vice president of the World Jewish Congress, and was previously CEO of the Edmond de Rothschild Group. The artistic part of the evening was performed by Orlika, Edouard’s sister, a well-known French singer who has been living in Israel the last few years.Fortis and the Philharmonic Ronnie Fortis, CEO of Hilton Hotels in Israel, hosted a festive celebration marking the 50th anniversary of the Hilton Tel Aviv. Hundreds of guests gathered in the ballroom for the celebration, which doubled as the annual fundraising evening for the Israel Philharmonic. Present to listen and applaud the concert were Tel Aviv Mayor Ron Huldai and his wife Yael; Simon Vincent, president of Hilton Europe, Middle East and Africa; Henry Tyke, VP Hilton UK and Israel; Etty Rosenthal, a Tel Aviv Hilton owner; Ruti and Meir Shetreet; Alfred Akirov; and Haim and Naomi Horowitz.

Gad Zeevi sings passionately Last Wednesday, the Israel Friends of Beit Hatfutsot (IFBH) held a special musical fundraising event at which composer and songwriter Nurit Hirsh performed.Proceeds from the evening went to a fund in memory of former legendary Tel Aviv mayor Shlomo (Chich) Lahat, which will fund visits to Beit Hatfutsot by soldiers and youth from the periphery. Hosting the evening were Reuven Adler, chairman of the Israel Friends of Beit Hatfutsot and Irit Admoni Perlman, director of the Israel Friends of Beit Hatfutsot.Lahat served as chairman of the board of the museum from the day it opened in 1978 until 1993. Lahat family members who attended the event included Chich’s wife, Ziva, his son Dan and daughter-inlaw Ronit. Other guests who attended and donated to the fund were Irina Nevzlin, chairman of the Board of Directors of Beit Hatfutsot and her significant other, Knesset speaker Yuli Edelstein (in their first public appearance as a couple); Dan Tadmor, CEO of Beit Hatfutsot; Hedva and Gil Sharon, who will soon be appointed CEO Discount Bank; and Talia and Gad Zeevi.Brunstein at the UNBusinessman Nir Brunstein, chairman of Krembo Wings, the only youth movement in Israel for children with severe special needs, was invited to address the United Nations. Brunstein, whose daughter Tal takes part in Krembo and has special needs, was applauded loudly after giving a personal and moving speech to country delegates and representatives of youth organizations from around the world. Danny Danon, Israel’s new ambassador to the UN, was unable to attend and Deputy Ambassador David Roth filled in for him.
Advertisement
Subscribe for our daily newsletter