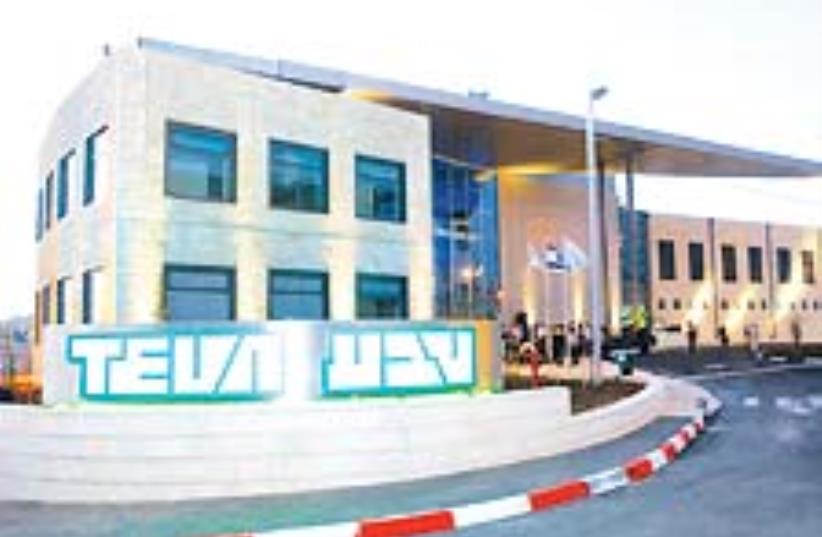 Teva Pharmaceutical Industries.
(photo credit: Ariel Jerozolimski)
Advertisement
The share price of Teva Pharmaceutical Industries Ltd. tumbled 10 percent to $44.25 in premarket trading on the Nasdaq Thursday after rival Biogen Idec Inc. reported positive data from its Phase III clinical trial of its oral multiple sclerosis drug, BG-12, and shares jumped 21 percent in pre-market trading on Thursday. BG-12 is a rival to Teva’s Laquinimod.The last time that Teva’s share traded at $45 was in May 2009, during the rally that began in March 2009 following the global financial crisis.In a conference call following the financial report for the first quarter, Biogen executives said that BG-12 cut the proportion of patients who relapsed by 49% and reduced the rate of progression by 38% after two years compared with placebo.Clal Finance analyst Jonathan Kreizman told Globes, “For a long time, Teva has been building market expectations that Laquinimod will be a dominant drug in its field. Today’s information shows that it has a worthy rival in addition to Gilenya, developed by Novartis AG.”Biogen sells two drugs that compete against Teva’s Copaxone: Avonex and Tysabri. Biogen's BG-12 will complete against Laquinimod, which is due to reach the market in 2012.Copaxone had over $3 billion in sales in 2010, accounting for a third of Teva’s profits. The map of multiple sclerosis treatments is changing as oral drugs come on the market and Copaxone will likely lose its high standing.At the 63rd American Academy of Neurology conference in Honolulu earlier this month, Biogen presented positive data about BG-12, as did Teva about Laquinimod. On Thursday, Biogen CEO Dr.George Scangos was optimistic about BG-12, mentioning the positive results in the clinical trial.It seems that investors considered Scangos’ optimism as reason to be worried about Teva. Bernstein Research analyst Roni Gal said that the good results of BG-12 puts it in a good position against Laquinimod and other oral multiple sclerosis drugs.He said that BG-12 results were close to those achieved by Novartis’s Gilenya, which is already on the market. However, he is cautious about the lack of safety profiles for the drug, and he believes Laquinimod will find its place in the market.According to Biogen’s financial report, Avonex had $642.5 million in sales in the first quarter and Tysabri had $251.4 million.Teva will publish its financial report for the first quarter on May 11.Teva's share price fell 1.7% on the TASE to NIS 165.50, before Biogen Idec’s announcement.