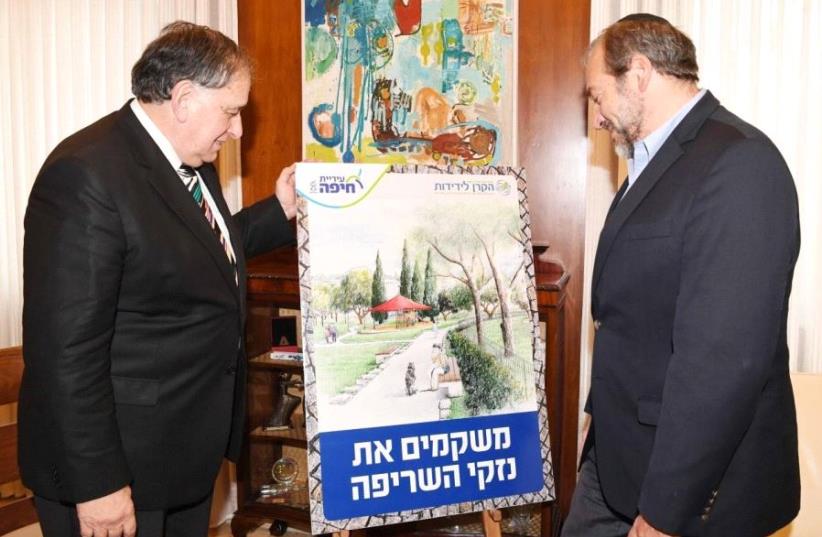 The Fellowship’s Rabbi Yechiel Eckstein and Haifa Mayor Yona Yahav look at an artist’s rendition of the new playground, in January.
(photo credit: FACEBOOK)
Advertisement
More than two months after wildfires hit Haifa, Finance Minister Moshe Kahlon and Haifa Mayor Yona Yahav planted the first new tree in the northern city. As part of the rehabilitation plan, more than 100,000 trees will be planted at a cost of NIS 160,000. About 200 trees were planted at a ceremony on Tuesday at the Menuha playground, which was damaged badly by the fires. “The International Fellowship of Christians and Jews is always proud to with the people of Haifa,” Chairman of the Fellowship Jeff Kaye, who also planted a tree, said at the event. “We were happy to offer our assistance to residents in need during the fire and now we are proud to be part of the reconstruction efforts. All our work is made possible through donations of millions of Christian friends of Israel who rally to the cause immediately every time that Israel is in an emergency, and donate their money to maintain the strength of Israel.”The Fellowship donated NIS 1 million to restore the playground and the Romema neighborhood, one of the hardest hit areas.Rabbi Yechiel Eckstein, president and founder of the Fellowship, had met with Yahav in the second week of January to present him with a check for NIS 1 million. In the first stage of the repairs, the municipality will install new playground facilities, such as swings, slides, climbing towers and a variety of other attractions for the children. The surface will be replaced by a soft, colored synthetic turf, and there will be a new shade sail. The municipality will also restore the surrounding garden by improving the asphalt trails, and planting more trees and flowers.Kahlon said at the event that leadership is about making tough decisions in times of crisis.“The decision that Mayor Yona Yahav and I made for Haifa, was to return life to normal as soon as possible,” he said. “As a resident of the city and as someone who was here during the fires, it’s almost incomprehensible that today, two months later, we are standing here when most people have been treated and the rehabilitation process has progressed at an unprecedented rate. Already 70% of the residents have returned to their homes, and I pledge not to abandon any of our citizens and to not stop until the last residents have received the best treatment and will be able to go home.”The wildfires caused an estimated $520 million in property damages, injured hundreds of citizens, and caused tens of thousands of residents to flee their homes as flames were approaching. Fortunately, no deaths were linked to the fires, but at least 600 homes and some 32,000 acres of natural woodlands were destroyed.To help meet the needs, the Fellowship launched a telephone hotline in Arabic, Hebrew and Russian. It gave details to the elderly and new immigrants about where they could find help, and it also gave volunteers a way to offer their help. The Fellowship also sent text messages to over 1,400 new immigrants who the organization helped move to Israel in recent months, to notify them about the available emergency services.When families were being forced from their homes by the approaching flames, the IFCJ also handed out hundreds of food and clothing cards. Totaling more than $20,000, the vouchers were given to 234 people to help those who lost everything in the fires. sign up to our newsletter