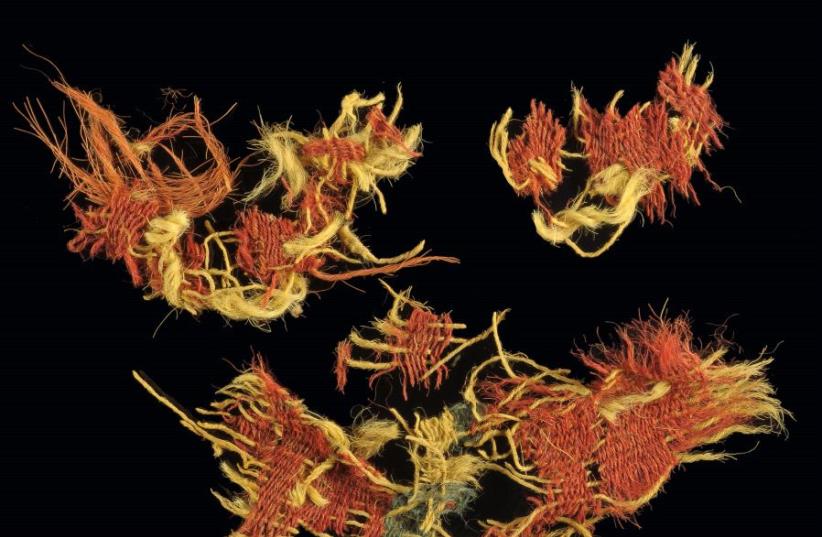 Microscopic magnification of the ancient woolen textile.
(photo credit: CLARA AMIT/IAA)
Advertisement
Evidence of the use of plant dyes on textiles dating to King Solomon’s reign recovered during an excavation in southern Israel’s Timna Valley suggests that ancient Israel’s elite dressed to impress.Researchers from a joint study by the Antiquities Authority, Tel Aviv University and Bar-Ilan University say the finds provide the earliest evidence of a plantbased dye in Israel.An analysis of the rare ancient fabrics – led by the authority’s Dr. Naama Sukenik and Dr. Erez Ben-Yosef of TAU, in cooperation with a research team from TAU and Bar-Ilan University – was published Wednesday in the prestigious journal PLOS ONE.According to the authority, the excavations, directed by Ben-Yosef, recovered dozens of fragments of 3,000-year-old textiles, which were preserved due to the region’s extremely arid climatic conditions.“The textiles date to King Solomon’s reign, in the Iron Age [11th-10th centuries BCE], and some are decorated with a red-and-blue bands pattern,” he said. “These are the earliest examples to have been found in the country and in the Levant [the eastern Mediterranean] of the remains of plant-based dyes.”Ben-Yosef said the dyes were analyzed and identified at the Bar-Ilan University laboratories using HPLC advanced analytical equipment.“On analysis, the data indicated the use of two main plants: madder, whose roots provided a red dye, and indigotin, probably produced from woad, which was used as a blue dye in a long and complex process involving reduction and oxidization that lasted a number of days,” he said.“Both these plants are among the best-known plant dyes in the ancient world. Once grown specifically for dyeing in the Land of Israel, their use continued up to the discovery of synthetic colors,” he continued.The textiles recovered in Timna, he said, were colored with true dye, which is characterized by a chemical bond between dye and fiber, attesting to professional knowledge and skill in the art of dyeing during this period.Sukenik noted that the colored woolen textiles came as a surprise to the researchers, since during the Iron Age Timna was principally an important smelting and mining site for the production of copper.“The findings indicate that the society at Timna, identified with the Kingdom of Edom, was hierarchical and included an upper class that had access to colorful, prestigious textiles,” she said.“The context in which the textiles were found suggests that the metalworkers responsible for operating the smelting furnaces were members of this class,” Sukenik added, noting that converting stone into copper required considerable skill.“It was one of the most specialized crafts of the ancient world, and the metalworkers apparently enjoyed high social status and wore distinctive, colored garments,” the researcher said.“In this sense, the findings are a real innovation, since they contradict the previous research supposition that the furnaces in the heart of the desert were operated by slaves.”The rare 3,000-year-old dyed textiles also shed unprecedented light on the fashion elite of the Iron Age, including information regarding social stratification and organization of early Edom, the economic status of the local population, trade connections, and technological capabilities.The textiles are currently being kept under strict climatic control in the authority’s organic materials storage facility.
sign up to our newsletter