Bible Study: Moses and the ‘you’ in all of us

Israelite leader was willing to have his name erased from Bible to save his people. 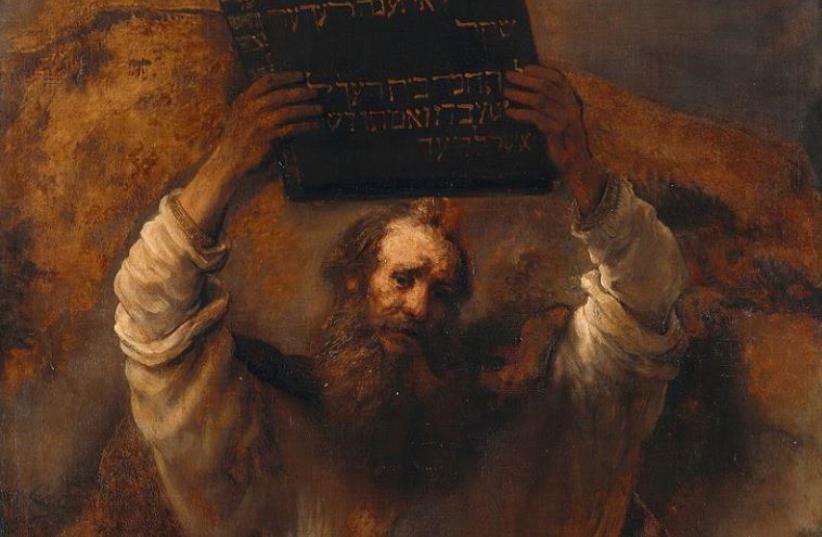 Moses, by Rembrandt.
(photo credit: Wikimedia Commons)
Advertisement
“And you are to command the Israelis to bring you pure olive oil, extracted by hand, for the light in order to keep the lamp burning continuously.” (Exodus 27:20) Who is this “you”? Why doesn’t God call this person by his name? Despite the seeming mystery behind this commandment to an anonymous Israelite, it is quite clear that this person is Moses.This week’s Bible portion picks up where it left off last week with the commandments of building the Tabernacle in the wilderness. After the Israelites will have built the proper structure in order to worship God at their highest level of spirituality, they now need to know how to worship Him and who will be the intermediaries to help bring them closer to God. And so, God tells Moses to bring oil for the lampstand in the Tabernacle so that the lamps in the menorah will burn from evening until morning.In the Hebrew Bible, Moses’ name appears 770 times, second only to David. He appears in every weekly portion, from his birth in the Book of Exodus and onwards until the Book of Deuteronomy, where for most of the time he speaks in first person. That is, he appears in all but one portion. And that is this week’s portion, which begins with the commandment of taking oil for the lampstand and continues with the garments of the priests and finally the altar of incense.So why is this portion different? What did Moses do to deserve his name being erased? Normally erasing someone’s name would mean that this is a punishment. Moses, on the hand, chose and pleaded to have his name erased - in order to teach us what it means to be a leader and what it means to be a parent and what it means to never give up on anyone.In next week’s biblical portion, which is seen as a precursor to the commandments of the Tabernacle, the Israelites fall off the path of the good, creating a golden calf and breaking the covenant they had made with God less than two months prior. God wants to destroy the People of Israel and to start over. The same nation that saw the Ten Plagues, the Splitting of the Reed Sea, the Manna falling from the sky - is the one that builds an idol forty days after seeing the smoke and lighting on Mount Sinai and hearing the voice of God? Moses doesn’t relent. He won’t let God destroy his nation, the Chosen People. And Moses makes it clear that he will do everything possible in order to “change God’s mind.” Even if it means that he will be erased from history, Moses isn’t willing to give up - not on one single member of his people: “Now, if you will, forgive their sin—but if not, blot me out of your book which you have written.” (Exodus 32:32) 13th century Rabbi Jacob ben Asher teaches that it was because of what Moses said that God fulfilled Moses’ request, albeit for only one portion in the Bible.Even the constant sinners have an opportunity to repent. They just need someone to see in the good in them and to guide in them the right direction to help them get their lives in order. That is not only what “you” need to do, as Moses did, but all of us need to do.To learn more about the Bible and the Jewish roots of Christianity, check us out at @christian_jpost, on Facebook.com/jpostchristianworld/ and see the best of the Holy Land in The Jerusalem Post - Christian Edition monthly magazine.
sign up to our newsletter