Bible Study: The importance of being grateful

Moses doesn’t strike the Nile, remembering how it harbored him as an infant. 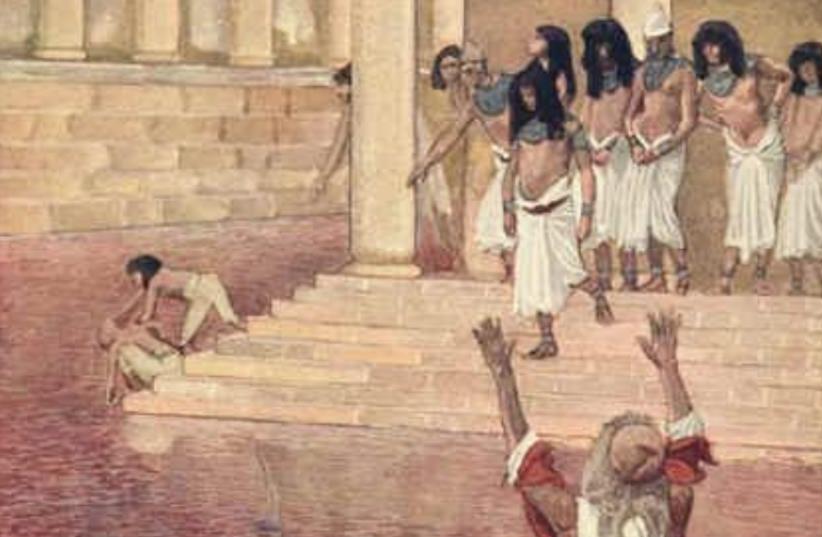 The First Plague: Water Is Changed into Blood, James Tissot, 1903
(photo credit: Wikimedia Commons)
Advertisement
How important it is to give thanks. From our breakfast table to our office to the bus we take home every night, we’d be surprised to learn how much goodness there is around us, and we’d be even more amazed to see how we completely ignore it and take it for granted.In this week’s Bible portion, (Parashat  Va’era “And I appeared,” Exodus 6:2-9:35) God teaches us an amazing lesson of the term “hakarat hatov,” being grateful and appreciating what’s done for you. God sends Moses and Aaron to deliver the Israelites from Egyptian bondage, warning Pharaoh that he will bring the Plague of Blood. In an unexpected twist, however, God doesn’t tell Moses to carry out the plague, but rather his brother, Aaron.This seems rather bizarre considering that Moses’ weakness is not in the realm of taking action, rather he is a stutterer, he has “uncircumcised lips.” And as told in Exodus 7:1, “Aaron thy brother shall be thy prophet,” in other words he will be your interpreter, he will be the one speaking on your behalf. So why does God command that Aaron specifically carry out the first plague, as well as the next two plagues of Frogs and Lice? 11th-century classical commentator Rabbi Shlomo Yitzhaki explains this through a midrash: “Because the river protected Moses when he was cast into it, therefore it was not smitten through his hand, neither at the Plague of Blood nor at the Plague of Frogs, but it was smitten through the hands of Aaron.” And why did Moses not bring about the Plague of Lice?For the same reason, Yitzhaki says. “This plague was not initiated by Moses for the soil did not deserve to be stricken by Moses because it protected him when he killed the Egyptian and hid him in the sand. Therefore, it was stricken by Aaron.”Being grateful is such an important attribute that only those whose eyes are open to see all that is good in the world and all the good that God has given them, can truly appreciate how blessed they really are. This is God’s lesson to us from the first three plagues. Being grateful, to everyone and everything, even inanimate objects, is of the utmost importance. Once, a great scholar told me that he was blessed with the fact that he had a lot of trouble remembering. No matter how simple the information was, even if was a name or a few digits, or even significant experiences or milestones, he would forget it shortly after. So, wherever he went, he took with him a small notepad and would write down all the information he needed to remember, and he would look at it and refresh himself daily.I sympathized with him and his problem, but I asked him how he thought that this was in fact a blessing. To have to go around and write down everything that happened to him so he could remember it seemed to me like an unbearable hardship. He corrected me – he didn’t write down everything that happened to him. He only wrote down the information that he needed to remember. All of the good in life, all of the blessings, all of life’s lesson’s – this he wrote down. And he would critically assess all of his experiences, so that even from the so-called “bad” ones, he found something good to write about. All that filled his memory was the good that happened to him, the bad was completely filtered out. And thus for him it was a blessing.
Shabbat Shalom, and may we all be blessed with the ability to be grateful. To learn more about the Bible and the Jewish roots of Jesus.
Check us out at @christian_jpost, on Facebook.com/jpostchristianworld/  and see the best of the Holy Land in The Jerusalem Post - Christian Edition monthly magazine.sign up to our newsletter