Bible Study: The lesson of the golden calf

Protecting against the enemy from within. 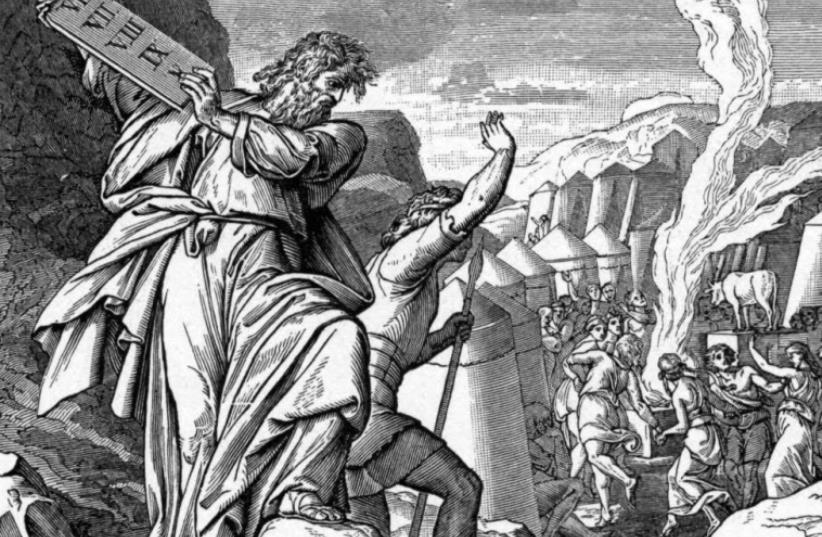 Illustartion from the 1897 Bible Pictures and What They Teach Us by Charles Foster
(photo credit: Wikimedia Commons)
Advertisement
“When the people saw that Moses was so long in coming down from the mountain, they gathered around Aaron and said, “Come, make us gods[a] who will go before us. As for this fellow Moses who brought us up out of Egypt, we don’t know what has happened to him.” (Exodus 32:1)
Forty days earlier, the People of Israel had seen it all. They had heard the thunder and saw the lightning, the smoke billowing up from the mountain and Mount Sinai trembling. They saw Moses climb up to the peak, with the glory of God looking like a consuming fire on top of the mountain.
So where did they go wrong? How could they have been so fragile to have been convinced to build a golden calf?The Bible tells us that after the Israelites make the golden calf, God tells Moses to “Go down, because your people, whom you brought up out of Egypt, have become corrupt.” God doesn’t say my people, but your people. According to the Midrash, these people who became corrupt, and who were corrupting the rest of the nation, were part of the “many other people” (Exodus 12:38) who joined the Israelites during the exodus from Egypt just months prior – people that Moses accepted into the nation without advising with God. According to rabbinical tradition, these rabble-rousers didn’t just mislead the nation at Mount Sinai. There were multiple times in the Israelites’ journey to the Holy Land when they called to return to Egypt or craved for physical desires, such as in Numbers 11:4: “The rabble with them began to crave other food,” trying to bring the whole of a nation down with them.But these were a minority, and they shouldn’t have been able to overcome a large people.  If this were only the truth. How many times have we been witness to a small minority of people, or people with a minority opinion, taking over their country and running it into the ground. How many people found themselves just "following orders"? Unfortunately, there are too many examples to list. We don't know why the Israelites had such a weak moment. But the fact is that they did - and with all due respect to them, this is perfectly normal, it can happen to anyone.Therefore it’s vital to set up fail-safe boundaries, so we know where the line is between good and evil and we can stop our deterioration before it gets out of hand. When we need to, we must protest against this minority – as small as it may be. Better yet we may draw it closer through love and turn the bad into good.And the lesson of the golden calf is not just one for our state or our people or our religion, but a lesson for each and everyone of us. Sometimes we are too busy looking for the enemy from outside. But more often the enemy is from within - more precise, from within ourselves. What characteristic do we have inside of us that is waiting for the right moment to completely take over. It may be a desire, it may be a craving or just a weak trait that we have.Let us be strong in our faith and not heed to the call of the evil inclination. For when Moses calls "Whoever is for the Lord, come to me," let us do as the Levites did, rallying around him and declaring that we are God's true servants.To learn more about the Bible and the Jewish roots of Jesus, check us out at @christian_jpost, on Facebook.com/jpostchristianworld/ and see the best of the Holy Land in The Jerusalem Post - Christian Edition monthly magazine.sign up to our newsletter