The documentary puts BDS in its place: If you don’t know what it stands for, remove the ‘D’ 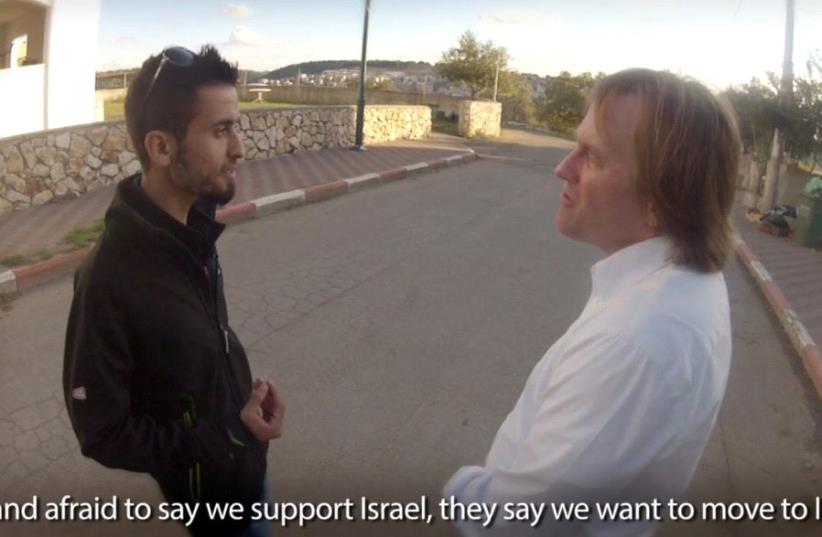 A screenshot from the film 'Boycott This!' showing comedian Brad Stine speaking with a Palestinian in the West Bank. (PTJN)
(photo credit: PTJN)
Advertisement
The three most popular letters of the Latin alphabet over the past decade have been “B,” “D” and “S.”Go to any college campus across the United States and ask students what it means when those three letters are combined and most won’t know the answer. But it doesn’t stop them from taking it up as a cause.“If you don’t know what BDS stands for, remove the ‘D,’” conservative Christian comedian Brad Stine says in the new film Boycott THIS! which had its initial theatrical release at the end of March.In the Proclaiming Justice to The Nations “docu-tainment,” Stine and the animated “Facts Man” travel around Israel and the rest of the world speaking to those on the front lines of those targeted by the anti-Israel Boycott, Divestment and Sanctions (BDS) movement.Colored with clips from comedic films and popular songs, Stine takes his act to Palestinians working in Israeli companies in Judea and Samaria, students on American college campuses and Israeli rescue teams such as ISRAID, speaking to a wide array of leading figures who help make sense of this anti-Jewish crusade.“I have no agenda. I’m a truth-seeker – no matter where that leads, because remember, the moment I can say there is no truth I can control you. I can create a fantasy world and I can demand that you live in it,” he was quick to point out in the first minutes of the 44-minute version of the film released to The Jerusalem Post - Christian Edition.The humorous film doesn’t shy away from contentious issues or any sides in the conflict. He visits Palestinians living in the West Bank who all their lives have had an anti-Israel position, speaks with everyday Jews, Christians and Muslims in Israel to see if there is any legalized discrimination in hospitals, schools and other public institutions, and finds out the truth about the history of the land of Israel, touching on the biblical period, the Roman renaming of the area to Syria Palaestina, the era of the Palestinian Jews and the 1947 Partition Plan.“I really don’t know a lot about Israel, but I have a connection to it based on my faith... I feel I have a biblical obligation to understand, and even an obligation to defend her,” Stine said in the beginning of his stand-up routine, which, in a Seinfeld-esque manner, fed off of the interviews he conducted over the course of the film. For example, while trying to discover if Israel really is an apartheid state, the comedian finds out that the 1999 Miss Israel was Arab, there has been an Arab Supreme Court judge and more than 75 Arabs have been members of Israel’s national legislature, the Knesset. Then, Palestinian human rights activist Bassam Eid confirms that Israel is not an apartheid state, and Kenneth Meshoe, a leading South African politician, implores the world that by calling Israel an apartheid stated “you are destroying the memory of the real apartheid.”Back on the stage, Stine jokes, “When it comes to apartheid, Israel sucks. For people who ‘rule the world’ you’d think they'd do a better job.”The general conclusion is straightforward. He finds out that Israel, like any other country in the world, isn’t perfect. But Stine can’t help but highlight Israeli innovations and projects that have positively impacted, and sometimes completely changed, the lives of millions of people around the world, including Arab citizens of Israel and Palestinians.By being a true “BDS-er,” one would have to give up cellphones, laptops, life-saving drugs, and essentially go back to the Stone Age. In other words, as Stine pointedly quips, “They have the audacity to be in the Middle East and be a democracy – that has got to stop.”Laurie Cardoza-Moore, founder and president of Proclaiming Justice to The Nations, told the Post that the goal is to take the documentary to churches, synagogues, university and college campuses and community centers, and to encourage people to spread the word about the truth behind the BDS movement.“The goal is to present a narrative to show that the Jewish people are not a people who have hatred in their DNA,” Cardoza-Moore says. “These are a people who are constantly creating to make the world a better place, to actually fulfill what it says in the Scriptures, that they would be a light to the nations. And to present that story to Christians.”sign up to our newsletter