After John Paul's death in 2005, Navarro-Valls stayed on as spokesman for Pope Benedict for more than a year to help his transition and then left Vatican service. 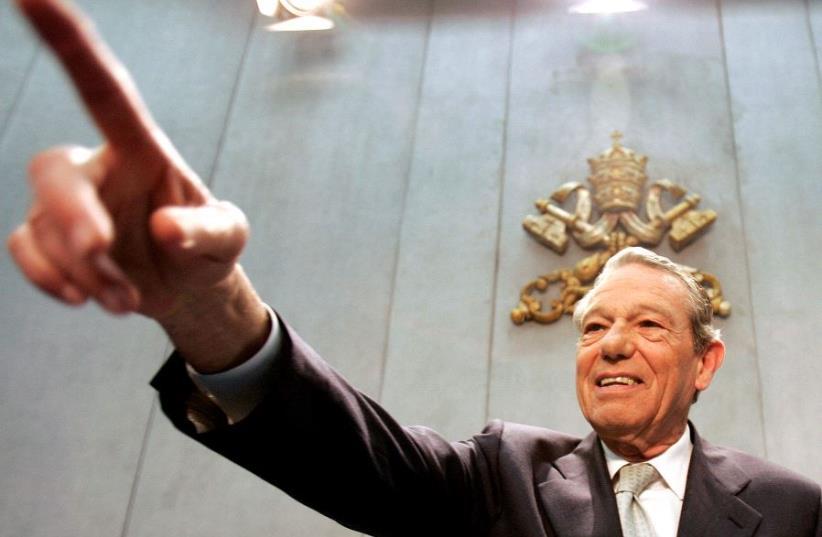 The Pope's official spokesman Joaquin Navarro-Valls gestures during a news conference in the Holy See press office at the Vatican February 10, 2005.
(photo credit: REUTERS)
Advertisement
Joaquin Navarro-Valls, who as spokesman for two popes was the world's second-most visible Catholic luminary for nearly a quarter of a century, died on Wednesday at the age of 80, friends said.
Navarro-Valls, a Spaniard who had degrees in medicine and psychiatry before becoming a journalist, had been suffering from cancer. He died in Rome.
In 1984 Pope John Paul named Navarro-Valls, a layman, to be Vatican spokesman and gave him direct access to his inner circle to a degree that no papal spokesman had before or has had since.
The photogenic Navarro-Valls became a celebrity in his own right, a global media personality often appearing on television to explain Catholic teachings in simple language.
"Joaquin Navarro-Valls embodied what Ernest Hemingway defined as courage: grace under pressure," said Greg Burke, the current Vatican spokesman.
Navarro-Valls hardly ever lost his composure during his nearly 22 years at the side of John Paul, including during the twice daily medical briefings as the pope lay dying in the Vatican Apostolic Palace and the world waited.
The one exception was when a reporter asked him to put aside the medical details and explain how he felt as a person. Navarro became choked up and held back tears before millions watching on television.
For more than two decades the Polish-born Pope John Paul, his priest-secretary Stanislaw Dziwisz, and Navarro became a de-facto triumvirate in the Vatican.
His privileged access to the pope irritated some cardinals in the Vatican administration, who had to wait in line.
He occasionally took action without clearing it with the Secretariat of State, the Vatican's key administrative department. But such was his friendship with the pope that he always emerged from controversy unscathed.
On one such occasion in the mid 1990s he decided that the Vatican could no longer keep quiet about the pope's evidently failing health and disclosed that the pontiff was suffering from Parkinson's disease.
Pope John Paul also occasionally used Navarro for sensitive missions, bypassing the Vatican's own diplomats.
In 1998 he went to Cuba to negotiate directly with Fidel Castro to iron out last-minute snags over Pope John Paul's historic visit.
During an all-night conversation punctuated by cigars and rum, Navarro-Valls convinced Castro to restore Christmas as a national holiday. It had been suppressed after the revolution.
After John Paul's death in 2005, Navarro-Valls stayed on as spokesman for Pope Benedict for more than a year to help his transition and then left Vatican service.
Until his health began failing he was a director of a Rome hospital and medical school run by the conservative Catholic group Opus Dei, of which he was a member.
sign up to our newsletter