Most form opinion on Jewish state from media, poll says. 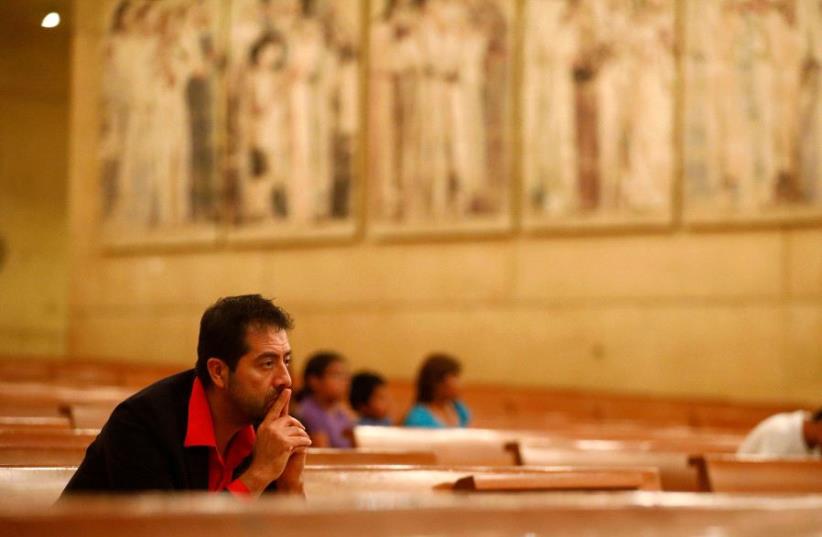 Ernesto Vega, of the archdiocese of Los Angeles Hispanic ministry, listens to an interfaith prayer service in Los Angeles, November 10, 2016.
(photo credit: PATRICK T. FALLON/REUTERS)
Advertisement
Most Hispanic evangelicals say the Bible has little to do with how they see Israel, a recent poll revealed. An online survey of self-identified Hispanic Christians and their views on Israel from Nashville-based LifeWay Research showed last week that the Hispanic Christian populations generally sympathize with both the Israelis and the Palestinians, but the prophetic revival of the State of Israel doesn’t play a significant role in how they see the Jewish state. “Overall, Israel isn’t a major concern for many Hispanic Christians,” Scott McConnell, executive director of LifeWay Research, said.The survey showed that the overall sources that have influenced most Hispanic Americans’ opinions about Israel is not the Bible, but the media. The media had an influence of 44%, the Bible 24%, friends and family 16% and 12% said their local church was what influenced their opinion on Israel.Being told to pick the one source that has influenced their opinions about Israel the most, the gap between the media and the Bible was even larger – 34% said the media shaped their opinion and 16% said it was the Bible that played that major role. As such a large percentage was basing their opinions on Israel based on the media, the survey showed frightening results that almost half of the respondents weren’t sure if the media wasn’t biased in its reporting on the one democratic and free state in the Middle East. Some 18% said the media was biased in favor of Israel, 13% said it skewed reporting against Israel, 24% said it was objective and 44% weren’t sure. Also, the Hispanic population has been known not to take sides in the Middle East, with 66% of respondents saying they sympathize equally with both Israelis and Palestinians. When asked what their overall perception of the country of Israel today is, 45% said they perceive it as at least “somewhat positive.”The survey did find, however, that most Hispanic Christians in the US were more supportive of the State of Israel than their fellow Americans. Fifty percent said the State of Israel has the right to exist, while 15% disagreed and 35% weren’t sure. But when asked why Israel had a right to exist, 55% said it was because every nation had the right to exist, and only 27% said it was because of some sort of connection to the Bible, either based on being key to the fulfillment of biblical prophecy, Jesus being a Jew, or the Bible saying the nations of the world should support the Jews. In comparison, a LifeWay Research survey conducted two years ago showed that only 42% of the general population believed that Israel had the right to exist, while 35% said it did not and 23% had no answer. There were 1,038 respondents for the survey conducted January 11-23, 2017. The sampling error does not exceed +4.1%, and the research partners were the National Hispanic Christian Leadership Conference and the Philos Project, which promotes positive Christian engagement in the Middle East.
Sign up for our Christian World newsletter >>