A combination of kitschy holiday decor and historic holy sites draw Christians to the Old City to celebrate the birth of Jesus.

By ARIEL COHEN
Christmas decorations in Jerusalem
(photo credit: ARIEL COHEN)
Advertisement
The stalls of the Old City take on a different look in December, with LED Christmas lights strung across the biblical cobblestones as a friar in full garb inspects some tinsel. Walk through the Damascus gate the morning of Christmas Eve,  Jingle Bells can be heard alongside the usual call to prayer.
Even though the historical city takes on a kitschy feel this time of year, the history is not forgotten. For those who make the journey to Israel for Christmas, Jerusalem’s Church of the Holy Sepulcher is the first stop to see both the place of Jesus’s burial and resurrection.
According to legend, Helena came to Jerusalem 300 years after Jesus’s death in order to find the place where he was crucified on the cross. A local Israeli led her to the hill of Golgotha in Jerusalem, saying that this was where Jesus was hung on the cross. It is in this spot that the Church of the Holy Sepulcher stands.
For centuries Christians came here to pray and give thanks to Jesus, and they would also take home a small piece of the hill. Now, centuries later, the hill of Golgotha is nearly completely eroded, but Christians still line up in the church over the supposed spot where Jesus was crucified in order to kneel down and pray. A glass cage now prevents the historical Golgotha from being further eroded, and visitors can only touch the historic spot.
In order to reach the top of the holy place of prayer within the church, one must climb stairs steep enough to make even the most athletic person feel a bit winded, and this proves to be an especially treacherous climb for older pilgrims.
In the long line awaiting the chance to kneel and pray, Christians marvel at the opportunity to be here on Christmas Eve. Everyone comes from a different place and says a different prayer, but they all were all driven here by a spiritual connection to the holy land at Christmas time. 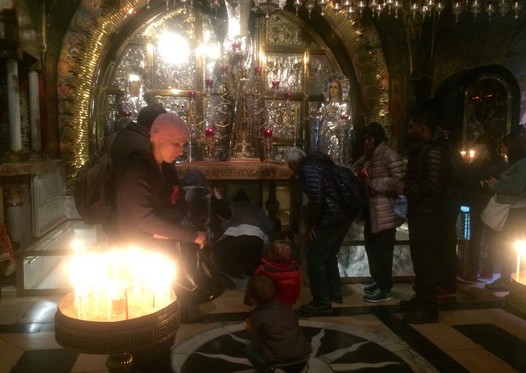 “This is a place that symbolizes everything and I can see so much history,” Iana Taranti, a Christian from Brazil visiting the holy land for the first time, tells The Jerusalem Post. “My father came here years ago and dreamed that his family would one day follow. All my life I heard about this place, but this Christmas I get to be apart of it.”
Nearby a group of Christians from France begins reciting prayers in their native tongue and two Russians start to sing as their friend kneels to pray at the alter. After stopping to pray one by one at Golgatha, pilgrims light a candle and file down the stairs back to the main area of the church and out again into the Old City.
Once they've left the holy site it’s back to the cobble stoned streets incongruously cluttered with Santa hats and plastic ornaments on Christmas trees. Later, most Christians will take a bus to Bethlehem in order to witness the place where Jesus was born.
“People always come at Christmas. Most people go to Bethlehem but many remain in Jerusalem,” Abu Hami, an employee of the Franciscan House for Pilgrims in the Old City says. “Every year the people feel so happy to be in the place of Jesus and the most holy Christian miracles."
Those who remain in Jerusalem will attend one of the many Christmas Eve and Christmas Day masses, which are offered in English, Arabic, German, Finnish, French, Danish and Swedish around the Old City and on the Mount of Olives.
Sign up for our Christian World newsletter >>