This is a "historic moment for the Basilica," vicar of the custody of the Holy Land says. 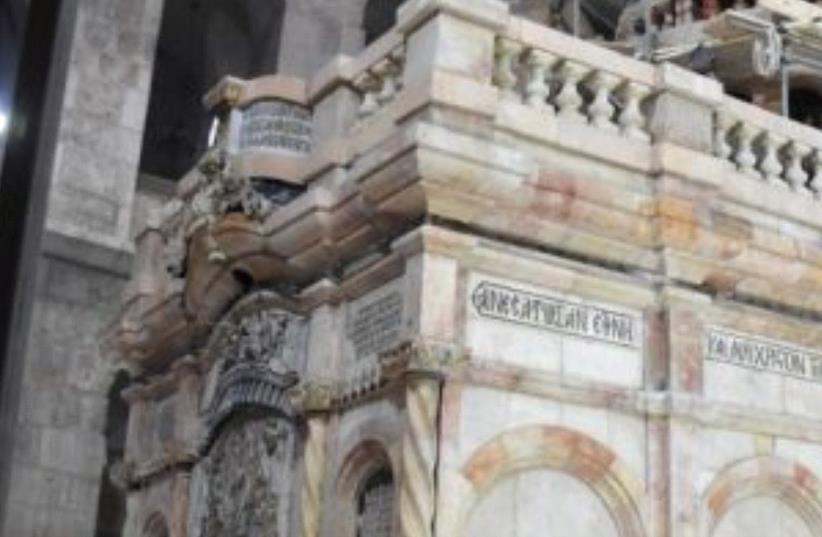 The restored Edicule on March 2.
(photo credit: LPJ)
Advertisement
Restoration work in the Basilica of the Holy Sepulchre has been completed, and visitors will be able to see the renovations after an inauguration ceremony in the Basilica on March 22, the Latin Patriarchate of Jerusalem announced on Wednesday night.Restoration work on Jesus’s tomb began in May 2016. Ten months later, with the help of generous benefactors, the scaffoldings will soon be completely taken down. At the beginning of March, the work was in its final phase and focused on the non-visible part of the tomb.The restoration workers are now devoting their time to strengthening the structure, to prevent damage from seismic movements and to preserve the tomb in the event of an earthquake, such as the one that struck in 1927, which weakened the Edicule – the 18th-century shrine that encloses the tomb.The last structural strengthening of the church, also called the Church of the Resurrection or Church of the Anastasis by Orthodox Christians, was overseen by the British in 1947. They couldn’t complete the restoration because there was no agreement between the Orthodox, Armenian and Franciscan communities, which share custody of the Basilica.For the first time since the status quo of 1857, an agreement was finally reached by the three denominations, which was essential to the success of the restoration work.Father Dobromir Jasztal, custodial vicar of the Holy Land and a Catholic priest, said this was a “historic moment for the Basilica of the Holy Sepulchre and for our presence in the Holy Land.“As in all projects of this type, it was not possible to avoid some difficulties,” but nonetheless there was a “good fraternal cooperation” between the denominations, he said.The delicate project, with both technical and ecumenical challenges, gives one hope, Jasztal said.“We were always able to face and solve problems with fraternal cooperation,” he said. “We hope that in the future, if needed, other projects can be planned, approved and carried out by the three communities, for the benefit of the Basilica.”Today, little remains of the church that Emperor Constantine the Great consecrated on September 13, 335. It took more than 10 years to build the original church, in what was then the city of Aelia Capitolina, on top of what was once a temple to Aphrodite. During recent construction, a series of tombs was discovered, including one many believe to be that of Joseph of Armithea, who prepared Jesus’s body for burial.The restoration of the tomb will be celebrated with an inauguration ceremony that will be a sign of unity, bringing together all of the communities, authorities and representatives of the Churches of the Holy Land, as well as many members of religious orders, faithful and benefactors, the Latin Patriarchate said.
sign up to our newsletter