Although most Copts reside in Egypt, the sect of Christianity has a presence in Jerusalem.

By REUTERS
Coptic Christians in Jerusalem
(photo credit: REUTERS)
Advertisement
Just days after Islamic State militants released a video showing the beheading of 21 Egyptian Christians in Libya, dozens of Coptic Christians attended a prayer service in Jerusalem's Coptic Orthodox Church near the church of the Holy Sepulchre on Wednesday (February 18) to mourn the victims.Senior Greek Orthodox Cleric, Atallah Hanna, condemned the incident and expressed sympathy with the families of the Egyptian men."We came here today to express our solidarity with the Coptic Orthodox church, to offer our condolences for the death of the martyrs and to condemn this unacceptable crime that was committed by a terrorist group that doesn't have any morals or ethics or any human principles," said Hanna. 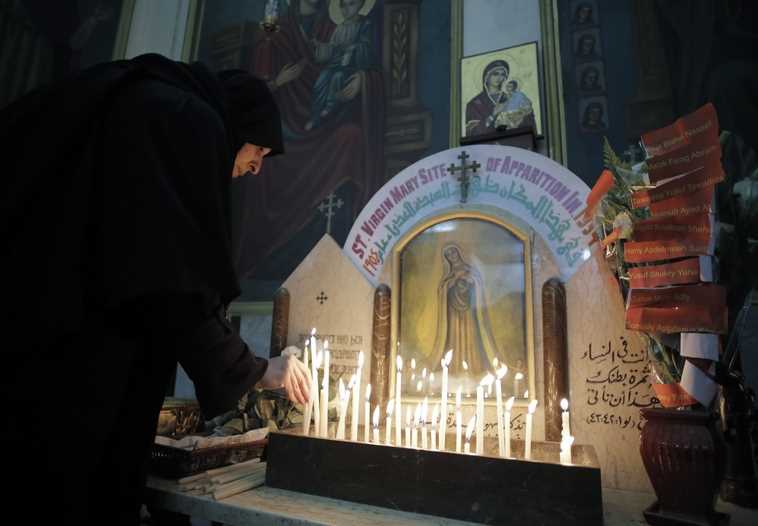 The Archbishop of Coptic Orthodox church in Jerusalem, Anba Abraham addressed worshipers during the service.One of the worshipers, George Qamar, said that he came to the Coptic church to express his condolences."We felt a huge pain when we heard the terrible news, it was painful for the whole world," said Qamar.The service was also attended by Jerusalem's Latin Patriarch, Fouad Twal.The 21 Egyptian Coptic Christians, who were among thousands of unemployed Egyptians desperately seeking work in Libya despite the risks, were marched to a beach, forced to kneel and then beheaded on video..The video appeared on the Twitter feed of a website that supports Islamic State, which has seized parts of Iraq and Syria and has also beheaded Western hostages.
Sign up for our Christian World newsletter >>