Jews, Muslims and Christians get together to pull off world’s biggest magic trick

"The world does not know that we here in Haifa have been living in peace for over a hundred years, I really want the whole world to know and learn this magic of peace that we live daily in the city." 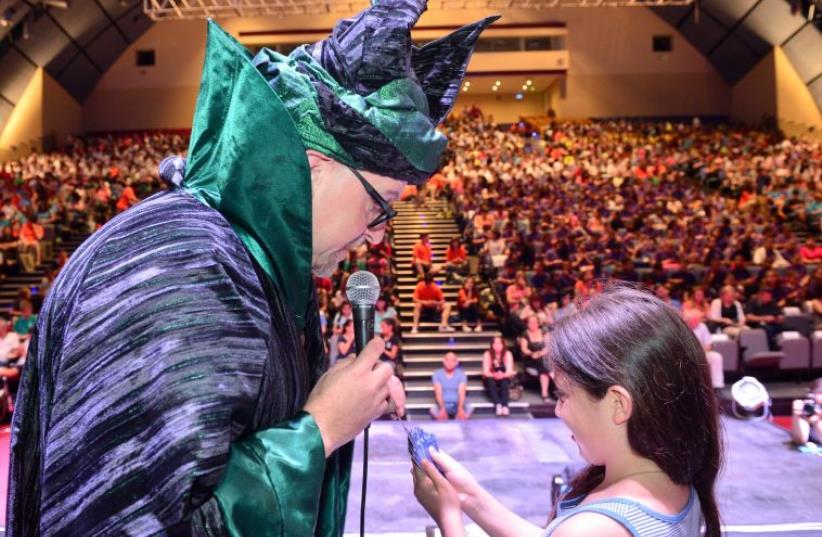 Haifa Magic for Peace event, June 1, 2015
(photo credit: TZVI ROGER, CITY OF HAIFA)
Advertisement
Israeli magician Cagliostro broke the record for the largest magic session at the Haifa International Convention Center on Monday morning. The session, teaching the new "Haifa Magic for Peace" trick, brought together 1,573 Jewish, Christian, and Muslim students from 25 schools across the city.Every participant received a pack of cards, each card with a word relating to coexistence written on it, such as friendship, respect, and dialogue. After a lesson and practice runs in front of witnesses, a notary, and qualified surveyors, all 1,573 children and Haifa Mayor Yona Yahav performed the trick in unison, with the one card each participant chose flying out of their pack and into the air."We have to enter the Guinness Book of Records with the Haifa Magic for Peace," said Yahav to the participating children. "The world does not know that we here in Haifa have been living in peace for over a hundred years, I really want the whole world to know and learn this magic of peace that we live daily in the city."The event was hosted in partnership with Beit HaGefen, a Haifa based Jewish-Arab Culture Center, the Haifa Municipality Department of Education – Department of Social Value Education, and volunteers from Maarag, a Tel Aviv based organization promoting multicultural society in Israel. sign up to our newsletter