Puritan tradition helped form the foundation of the movement supporting the Jews’ return to Israel. 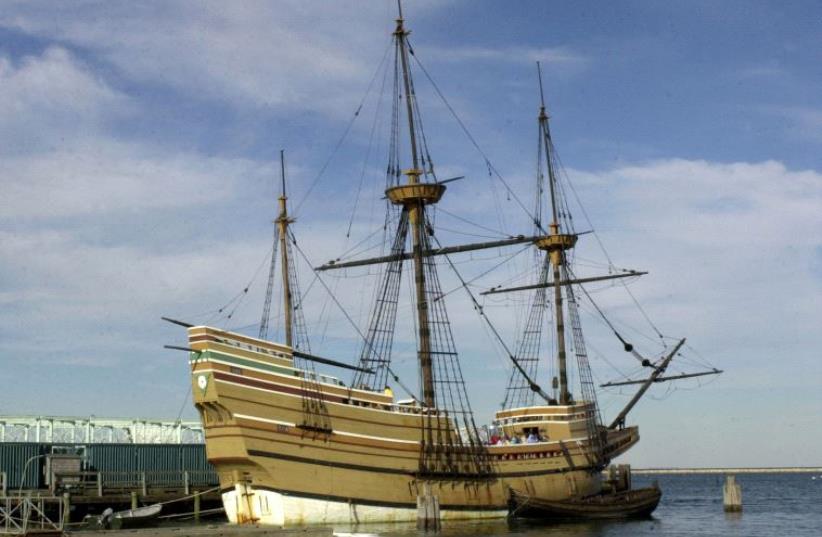 The Mayflower II, a replica of the ship which carried the pilgrims to the New World in 1620, is docked in Plymouth Harbor 25 November, 2003 in Plymouth, Massachusetts.
(photo credit: MICHAEL SPRINGER / GETTY IMAGES NORTH AMERICA / AFP)
Advertisement
With the founding and development of Colonial America, the New World not only became a place for new settlements. It also became a place for previously rejected ideas to redevelop and flourish, such as the return of the Jewish People to Israel. On Sept. 6, 1620, the Pilgrims sailed on the “Mayflower” from Plymouth, England, to settle in the New World.Despite the terrible and cramped conditions on the small ship, the 101 Puritans braved the tough journey, with only one passenger dying during the more than two-months-long voyage. The Puritans believed themselves to be like the Israelites fleeing Egypt, wandering into the vast and unknown wilderness and reaching the promised land of the New World.As their guide, they used the Bible, which only less than a decade prior had been published in English, in what is now known as the King James Version, and was slowly beginning to find its way into every home in England. They adopted biblical customs, established biblical codes, such as observance of the Sabbath, and gave their children Hebrew names. It was this use of and familiarization with the Bible in a new territory that was not bound by any past religious beliefs that helped found the beginnings of the Jewish Restoration movement, which calls for the return of the Jewish Nation to Israel and is a fundamental tenet of modern Christian Zionist beliefs.In contrast, in the late 15th century England, scholars and religious figures with puritan beliefs, such as Francis Kett of Cambridge University, dedicated sections in their academic works to explaining the significance for Christians of the Jews’ return to the Holy Land, but they were arrested, persecuted, and some were even burned at the stake.In Colonial America, these thoughts and ideas found a good home, and quickly spread throughout the population. “With a significant number of English speaking Christians during the last 400 years thoroughly saturated with Jewish restoration theology, it should not be surprising that many such Christians in the last two hundred years have risen up to play key roles in the establishment of the modern state of Israel,” writes Liberty University Prof. Thomas D. Ice in his work Lovers of Zion: A History of Christian Zionism.

These beliefs have even made it to the highest and most powerful office in the country – the Executive Office of the President of the United States. Presidents John Adams, Theodore Roosevelt and Woodrow Wilson, among others, made their desire known for a Jewish state to be established in historical and biblical Israel, and these beliefs reached a high point in President Harry S. Truman’s recognition of the nascent State of Israel in 1948 and they continue to flourish until this day with strong US-Israeli ties.
The road to modern-day Christian Zionism as the world knows it has taken many turns in forming its beliefs, yet it owes its development in part to the Puritans.  To learn more about the role of the Bible in history and the roots of Christian Zionism, check us out at @christian_jpost, on Facebook.com/jpostchristianworld/ and see the best of the Holy Land in The Jerusalem Post - Christian Edition monthly magazine.sign up to our newsletter