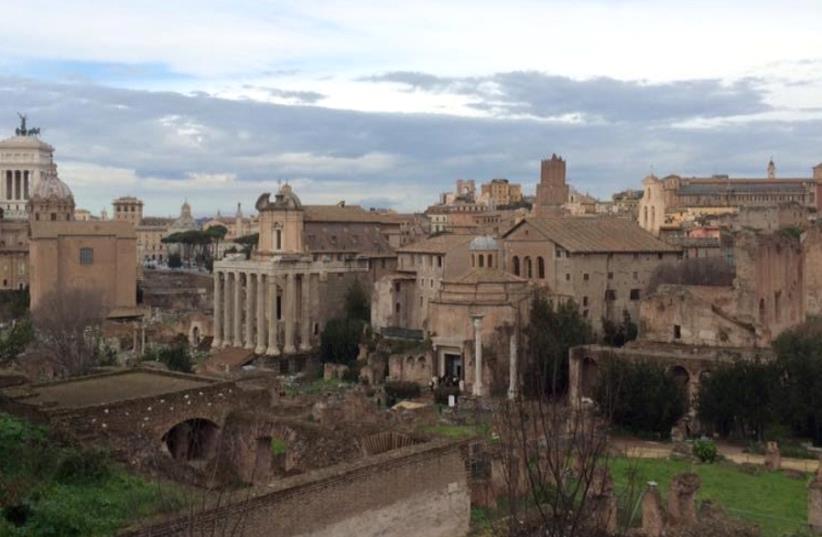 Rome, Italy
(photo credit: JULIE STEIGERWALD)
Advertisement
More than 70 years after Romans stepped aside and let the Nazis deport the city’s Jews, Rome once again made the declaration that the only way to defeat the antisemitism of the present is by remembering the antisemitism of the past. On October 16, 1943, more than 1,000 Jewish residents of Rome were torn from their homes, marching from the Jewish ghetto to the Church of Santa Maria in Trastevere, where they eventually were deported to Auschwitz. They arrived to the death camps on October 22, and only 16 people returned to their homes. The remembrance march, held this week on the roundup’s 74th anniversary, went in the opposite direction, from the church to the ghetto, as a symbol of repentance. It was a “great movement of sensibility and culture, a real revolt against the evil and absurdity of racism and antisemitism that today we see dangerously re-emerging,” Monsignor Marco Gnavi, pastor of Santa Maria in Trastevere, said at the march. “To be here means you are showing you love the Jewish community, our brothers.” Every year, the Community of Sant’Egidio and the Jewish community of Rome recall together that tragic day, with a march from Piazza Santa Maria in Trastevere to Largo. The organizers call it a “pilgrimage of memory,” because all, especially younger generations, tend to forget the tragedy of deportation during the Nazi occupation, according to the organization’s website. This year, thousands of Romans, other Italians and foreigners, along with civilian and military authorities, marched through the streets with the procession being opened by children with their message printed on a banner: “Peace is the future.” At the back of the silent procession, participants held up the names of concentration camps.Ambrose Spreafico, bishop of Frosinone-Veroli-Ferentino and president of the Episcopal Commission for Ecumenism and Interreligious Dialogue, told Radio Vatican that believers must look to their Bibles more often, especially in today’s world, where antisemitism and hate seem to abound.“The Bible oddly says a few times ‘remember’ but ‘do not forget’ because we are in a society that forgets,” he said. “Forget the pain. We see this happening every day. Forget this tragedy, forget Lampedusa [the western island hosting camps for African migrants and refugees], forget the evil. Pope Francis often reminds us – and then we go back to be complicit of [forgetting again].” At the event, he said that the march is the answer to antisemitism and every form of racism.Riccardo Di Segni, chief rabbi of Rome, Ruth Dureghello, president of the Jewish community of Rome and Virginia Raggi, Rome’s mayor, also attended. The march took on a special significance this year, as Italy has been embroiled in a debate on whether to give citizenship to the children of illegal migrants who were born in Italy. Last month, Pope Francis made his views clear when he faced St. Peter’s Square and made a hug gesture. “Just like that. Arms wide open, ready for a sincere, affectionate, enveloping embrace,” he said.
Sign up for our Christian World newsletter >>