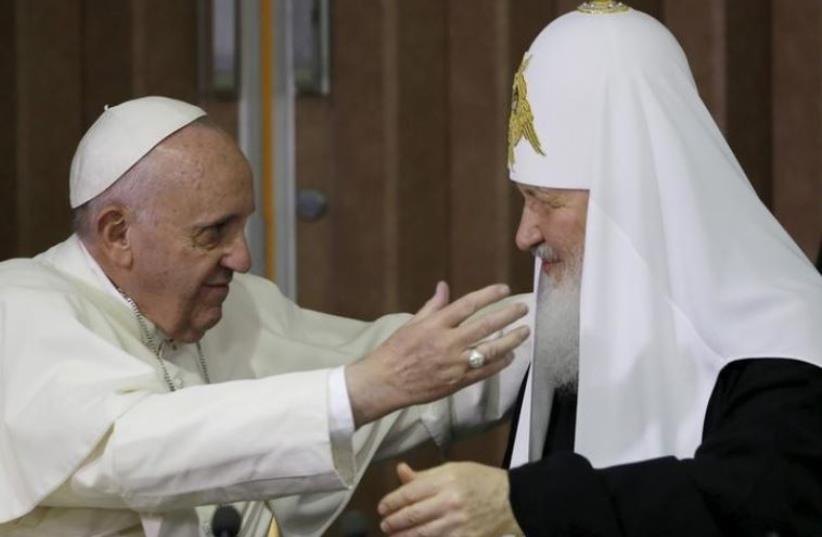 Pope Francis, left, reaches to embrace Russian Orthodox Patriarch Kirill after signing a joint declaration at the Jose Marti International airport in Havana, Cuba, Friday, February 12, 2016.
(photo credit: GREGORIO BORGIA/POOL/REUTERS)
Advertisement
Christians from different denominations around the world need to unify in order to protect their shared values, a leading archbishop in the Holy Land said. On the backdrop of the historic February 12 meeting between the Catholic Church’s Pope Francis and Patriarch Kirill of Moscow of the Russian Orthodox Church, Archbishop Theodosios Atallah Hanna of Sebastia said that only by building bridges between the two churches in Rome and Russia can Christians – especially those in the Middle East – continue to live according to their traditions and values. “We hope that in the future, the Churches would continue to have a dialogue, for nowadays Christians are being persecuted in the Middle East and some countries have given up their Christian values and principles,” the Orthodox Church of Jerusalem archbishop said. “I believe that holding Christian meetings like these is not an intellectual luxury but a crucial need to strengthen and keep these values that we have.”In an interview with the Latin Patriarchate of Jerusalem last week, Hanna said that unity of churches and denominations should always be at the forefront of prayers.“In the prayers that we raise to the Lord, we keep on asking him for unity,” he said. “Meetings like this pave the way of a strengthened love, which should first come from the heart of each Christian, it is through love that we can reach unity.The archbishop from Sebastia, which is located next to Nablus in Samaria, said that he does not believe there is one Catholic or Orthodox believer who would not like to see the two Churches find a common date to celebrate Easter and Christmas, and even more so see a rapprochement between the two Churches.“There is a real desire among Catholic circles as much as among Orthodox ones to seek not only reunification of religious Christian feasts but also a wider unity, that of Christians,” he said. “We face certain obstacles and hurdles, but we hope to overcome them in future.”Hanna said he followed the historic meeting between Francis and Krill, which took place in Havana, Cuba, with great attentiveness. What drew his attention was “the pure love that lies in the hearts of both Pope Francis and Patriarch Kirill and their honest desire to build bridges.” He said that just as Cuba is a bridge between North America and South America, so too, hopefully, will this meeting be the bridge between the Catholic and Orthodox Church. “We were one church in the first millennium,” he said. “When we talk about a thousand years of our history, we talk about the common heritage of faith and tradition. Therefore holding this meeting is a step forward towards restoring this unity. We might not be united at the present moment but I encourage love between churches in spite of obstacles.To learn more about Christians in the Middle East, check us out at @christian_jpost, on Facebook.com/jpostchristianworld/ and see the best of the Holy Land in The Jerusalem Post - Christian Edition monthly magazine.
Sign up for our Christian World newsletter >>