The nation of Israel lives 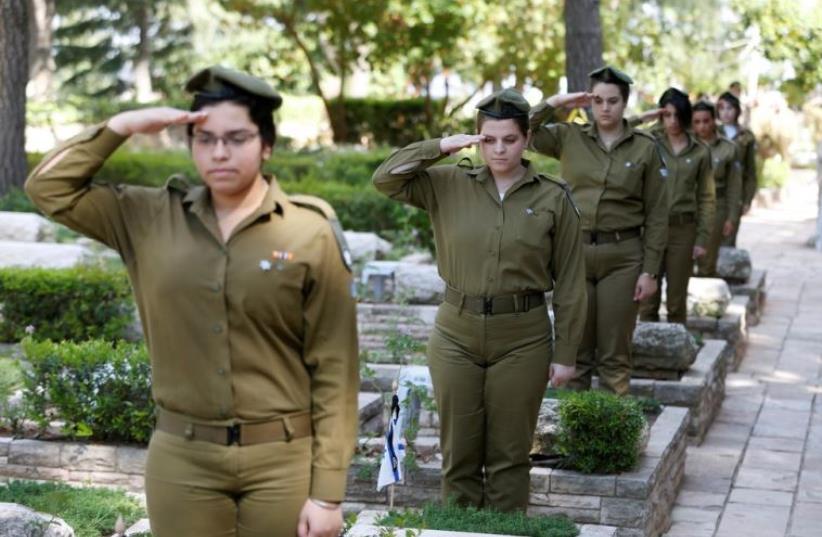 Israeli soldiers salute as they stand next to graves of fallen soldiers at Mt. Herzl military cemetery in Jerusalem
(photo credit: REUTERS)
Advertisement
In Israel, May is a month of remembering great – and terrible – events.While the Hebrew calendar causes their dates to vary from year to year, Holocaust Remembrance Day (Yom HaShoah), Remembrance Day for the Fallen Soldiers of Israel and Victims of Terrorism (Yom Hazikaron) and Independence Day (Yom Ha’atzmaut) all fall in May this year.And while two of the dates recall great tragedies, each day, in its own way, points to the great resilience, strength, and character of the Jewish people.Of these three, Holocaust Remembrance Day is perhaps the best known and most widely commemorated by Jews worldwide (and by some Christians, too). The story, sadly, is all too familiar: In the 1930s and ’40s, Hitler’s Nazi regime systematically exterminated six million Jews, along with millions of others deemed “unfit” to live in Hitler’s new, National Socialist state, a state built on misbegotten ideals of hate, oppression, and intolerance.The full name of Holocaust Remembrance Day in Hebrew is actually “Yom Hashoah Ve-Hagevurah,” meaning the “day of remembrance of the Holocaust and the heroism.” This reminds us that even though a shockingly high number of people looked the other way when presented with evidence of Nazi crimes, there were those who went to great lengths to save Jews.Not all of these were Jewish. In fact, many remembered today as “righteous gentiles” were Christian. There was Corrie ten Boom, whose home in Holland sheltered those fleeing Nazi oppression. In France, Pastor Andre Trocme and his wife, Magda, helped make an entire town, Le Chambon, a haven for persecuted Jews. Raoul Wallenberg, a Swedish Christian, rescued thousands of Jews from the Nazi death machine. And there were, of course, many more who are less well-known, but no less deserving of our gratitude.Remembering those who died during this terrible chapter in history is a sacred duty. But equally important is remembering the hundreds of thousands who, by the grace of God and the acts of many brave people, survived. Tragically, many of them are now living out their last days in poverty, tormented by memories of relatives they lost to violence, of homes they had to flee, of entire communities they saw decimated. We at the International Fellowship of Christians and Jews do our best to ease their plight through programs that alleviate their hunger, fill their need for lifesaving medicine, and fill their equally important need for someone to visit them to ease their isolation and loneliness. Around 40 survivors die each day, and one day, not too long from now, there will be none left. Our moral obligation is to help them now, while we can. Though Israel’s modern history is one of great success and fulfillment of biblical promises, it is also a history of struggle. No sooner had the Jewish state declared its sovereignty in 1948 than it was attacked by the combined armies of five Arab nations seeking its destruction.Israel prevailed in that struggle, but there were many more occasions when it was forced to fight simply to survive – the 1967 Six Day War, the 1973 Yom Kippur War, the 1982 First Lebanon War, and many others.About a week after Yom Hashoah, there is Remembrance Day for the Fallen Soldiers of Israel and Victims of Terrorism (Yom Hazikaron), honoring the soldiers who have been killed during Israel’s wars, as well as those who have died in the seemingly never-ending terrorist campaign against the Israeli people.Just as on Holocaust Remembrance Day, for two minutes on Yom Hazikaron sirens are sounded across the nation of Israel. As they wail, the entire country literally comes to a standstill. Even traffic stops as drivers get out of their cars to stand in silent remembrance of the fallen.It is appropriate that one day after Yom Hazikaron we observe Yom Ha’atzmaut, Independence Day, the day in 1948 when Jewish leaders gathered in Tel Aviv to declare the independence of the modern Jewish state. On that day, the Jewish people declared that they would no longer be victims, and that they would defend their right to live and worship as they please. And while we have had to fight for the existence of that state more than once, and our neighbors have tragically refused to accept the offer in Israel’s declaration of independence to “establish bonds of cooperation and mutual help with the sovereign Jewish people settled in its own land,” the establishment of the Jewish state was a monumental historic event, foretold in biblical prophecy, and providing proof that all those who shed their blood for its formation did not do so in vain.So, as we remember the dead, and recommit ourselves to do all we can to help the living, let us never forget this inescapable and enduring fact – “Am Yisrael Chai!” – the nation of Israel lives! Thanks be to God.Rabbi Yechiel Eckstein is founder and president of the International Fellowship of Christians and Jews.
Sign up for our Christian World newsletter >>