There is no denying Jewish ties to Jerusalem, UNESCO head says

‘To deny, conceal or erase any traditions undermines the integrity of the site.’ 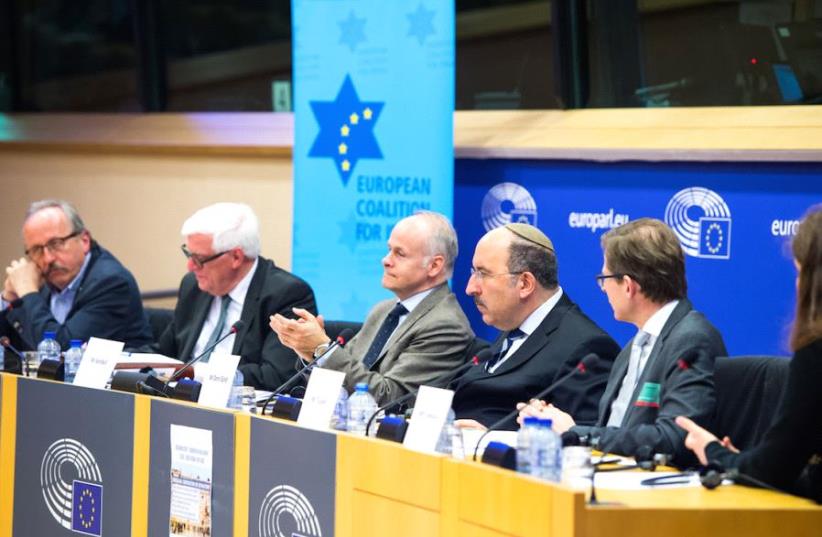 ECI director Tomas Sandell applauds after a speech at his organization's policy conference in the European Parliament last week
(photo credit: ECI)
Advertisement
“In the Torah, Jerusalem is the capital of King David, where Solomon built the Temple and placed the Ark of the Covenant,” UNESCO Director-General Irina Bokova said, firmly rebuffing any attempts by her organization to deny Jewish history connected to Jerusalem.Bokova was speaking at the policy conference of the European Coalition for Israel, a Christian grassroots movement, in the European Parliament on Thursday. Distinguishing between her role as the highest official of UNESCO and the resolutions passed by member states of the same organization, she said the protection of the heritage of Jerusalem is part of a broader vision for peace and the fight against all forms of denial of Jewish history, delegitimization of Israel and antisemitism.“To deny, conceal or erase any of the Jewish, Christian and Muslim traditions undermines the integrity of the site, and runs counter to the reasons that justifies its inscription in the UNESCO World Heritage List,” she said.
UNESCO resolution on Temple Mount in Jerusalem
Bokova’s personal remarks were conveyed by UNESCO director Genc Seiti. Given the official EU policy of supporting a redividing of Jerusalem and the creation of a Palestinian state with east Jerusalem as capital, the conference was unique in that it clearly contradicted EU policy and ambitions.In his keynote speech, Dore Gold, former Israeli director-general of the Foreign Ministry, presented two competing schools of thought that the EU will have to choose between. “One school of thought teaches that Islam is superior to any other religion while the other school of thought wants to protect all religions,” the current president of the Jerusalem Center for Public Affairs said. “Only Israeli sovereignty over Jerusalem can preserve all the holy sites while radical Islam will seek to destroy them.”He illustrated his point by recent examples, such as the blowing up of ancient Buddha statues in Afghanistan by the Taliban in 2001 as well as the occupation and desecration of the Church of the Nativity in Bethlehem in 2002 by Palestinian terrorists who were later given free exile in Europe and Gaza. “Which side will Europe chose – the side that protects holy sites or the one that seeks to destroy them?” he asked.Vice President of the European Parliament MEP Ryscard Czarnecki gave the Israeli government credit for protecting all the holy sites after recapturing Jerusalem in 1967. He acknowledged that the Jewish people have had a long history in his native Poland but pointed out that no other city can illustrate Jewish identity and aspirations more than Jerusalem.ECI founding director Tomas Sandell added that Jerusalem is not only of legal, political and strategic significance but symbolizes the very values that our Western civilization are built on. To abandon Jerusalem is to dismantle these very values, he said.Co-host MEP Bas Belder shared the importance of Jerusalem for him personally as a reformed Christian, and both MEP Hannu Takkula and MEP Péter Niedermüller acknowledged that the members of the European Parliament need more information in order to understand the historic and legal realities in Jerusalem.Jerusalem Mayor Nir Barkat sent a recorded video message to the conference illustrating the diversity in the Holy City by noting that “in one square kilometer we have more churches, mosques and synagogues than anywhere else in the world.”The conference concluded with the presentation of an open letter in support of a united Jerusalem. In his remarks, ECI legal counsel Andrew Tucker explained why Jerusalem needs to remain the undivided capital of the State of Israel, adding that even a majority of Palestinians living in east Jerusalem would prefer to live in the State of Israel rather than in a Palestinian state.sign up to our newsletter