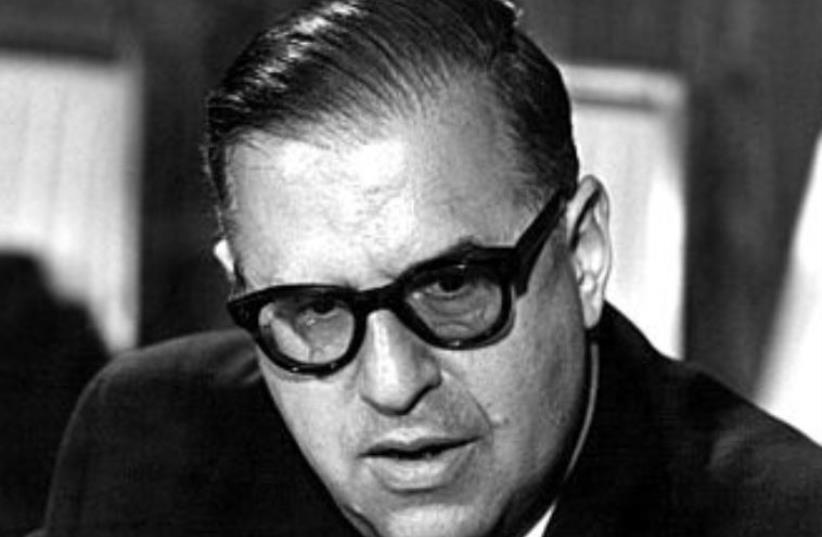 Abba Eben
(photo credit: Wikimedia Commons)
Advertisement
Israeli diplomat and minister Abba Eban was born on this day, February 2, 1915. Eban was born in Cape Town, South Africa, but moved to the United Kingdom at an early age. Showing signs of linguistic brilliance at a young age, the scholar-to-be studied Classics and Oriental languages. Eban, however, was drawn to the real love of his life – Zionism.He worked with the World Zionist Organization in 1938, and during the Second World War the British Army sent him on special assignment to the Middle East serving as a liaison officer for the Allies to the Jewish residents.In 1946, Eban officially made aliya, moving to the newborn State of Israel and dedicating his life to advancing the prophetic vision of the Land of Israel coming back to life. Eban’s most significant diplomacy occurred in the United Nations. In 1947, he was appointed a liaison officer to the United Nations Special Committee on Palestine, and continued at the world body for the next decade, simultaneously serving as ambassador to the United States. In 1949, Eban made one of his most memorable speeches, appealing to the General Assembly to recognize the provisional government of Israel and for the Jewish state to be accepted as a member. Not only did the United Nations accept Israel, but the speech, heard by millions, put Israel on the world map and turned the diplomat into a household name.On countless occasions, Eban was frustrated with the blatant distortion of the truth, as the world organization (as it still does today) constantly condemned Israel. This made him coin the following phrase: “If Algeria introduced a resolution declaring that the earth was flat and that Israel had flattened it, it would pass by a vote of 164 to 13 with 26 abstentions.”Eban was a master of debate, speaking 10 languages fluently. US Secretary of State Henry Kissinger had this to say about him: “I have never encountered anyone who matched his command of the English language. Sentences poured forth in mellifluous constructions complicated enough to test the listener’s intelligence and simultaneously leave him transfixed by the speaker’s virtuosity.”Eban returned to Israel, entering the Knesset and taking on the role of various ministers. As foreign minister, Eban defended Israel’s actions during the Six Day War, saying “our country’s choice was plain.” Eban is remembered as a hero of Israel, whose speeches and debates helped Israel gain recognition amongst most nations of the world. To learn more about the building of the modern State of Israel as envisaged by the prophets of the Bible, as well as the Jewish roots of Jesus, check us out at @christian_jpost, on Facebook.com/jpostchristianworld/ and see the best of the Holy Land in The Jerusalem Post - Christian Edition monthly magazine.
Sign up for our Christian World newsletter >>