Today in History: The ‘father of biblical geography’ 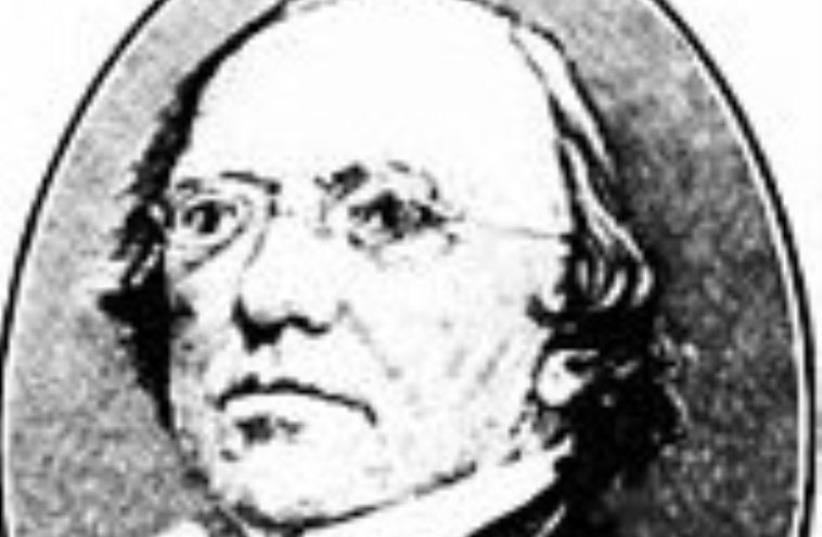 Edward Robinson.
(photo credit: Wikimedia Commons)
Advertisement
153 years ago today, January 27, 1863, Edward Robinson, “the father of biblical geography” died.The American adventurer, born April 10, 1794, grew up in Connecticut, and being raised in Puritan New England helped foster his love for the Bible and the Holy Land. In his youth, he studied Hebrew and other classical languages, and as an aspiring biblical scholar even helped Hebrew professor Moses Stuart complete his “A grammar of the Hebrew language.”In 1832, the American scholar set out for the journey of a lifetime – a journey to the Holy Land on a mission to find and identify locations from the Bible. Robinson was able to successfully identify almost 200 locations from the Bible. One of his most significant finds was the “Robinson Arch,” the remains of a staircase on the southwestern corner of the Temple Mount, which was later named after the biblical explorer.King Herod built the staircase as part of his renovations to the Second Temple in the late 1st century BCE (Before the Common Era). The arch was destroyed during or shortly after the Great Rebellion in Jerusalem, sometime from 70 to 79 CE.Another revelation that Robinson made was when he reached the area of Beersheba and the Negev desert, declaring that this was the spot where the founders of the Israelite Nation lived. Robinson writes in “Biblical Researches in Palestine and Adjacent Countries ” that “Here then is the place where the patriarchs Abraham, Isaac, and Jacob often dwelt! Here Abraham dug perhaps this very well; and journeyed from hence with Isaac to Mount Moriah, to offer him up there in sacrifice.”But his most momentous moment, not as a scholar but as a believer – testifying for the millions who never had the opportunity to reach the Holy Land – is when he reaches the Holy City of Jerusalem:“The feelings of a Christian traveller on approaching Jerusalem, can be better conceived than described. Mine were strongly excited...From the earliest childhood I had read of and studied the localities of this sacred spot; now I beheld them with my own eyes; and they all seemed familiar to me, as if the realization of a former dream. I seemed to be again among cherished scenes of childhood, long unvisited, indeed, but distinctly recollected...” (Robinson, Edward, and Eli Smith. “Section VI. Jerusalem - Incidents and First Impressions,” Biblical Researches in Palestine, and in the Adjacent Regions. A Journal of Travels in the Year 1838. Boston: Crocker and Brewster, 1856. Pg. 221)Robinson would return to Israel a second time in 1852. Some of his other major exploits include identifying Masada, the ancient city of Dan and Capernaum. To learn more about the role of the Bible in history, including the building of the modern State of Israel as envisaged by the prophets of the Bible, and the Jewish roots of Jesus, check us out at @christian_jpost, on Facebook.com/
jpostchristianworld/ and see the best of the Holy Land in The Jerusalem Post - Christian Edition monthly magazine.
Sign up for our Christian World newsletter >>