Voice of Hope station to broadcast to entire Middle East 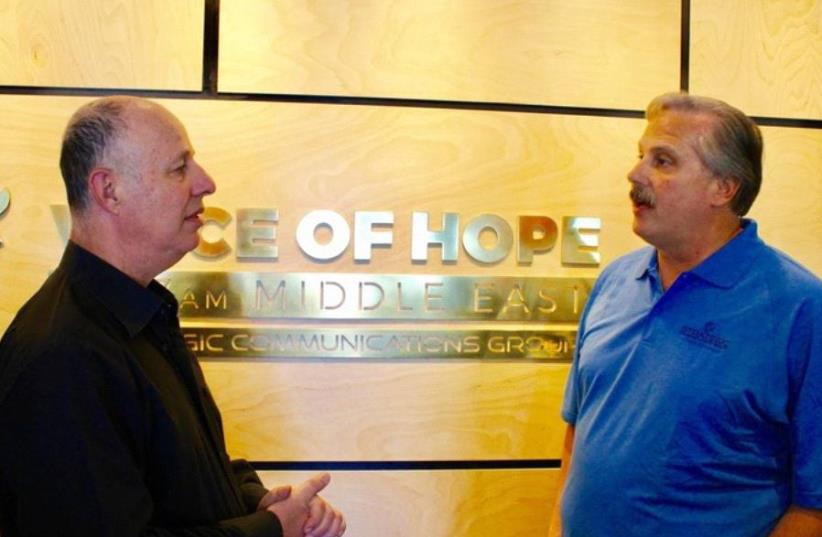 Communications Minister Tzachi Hanegbi meets with John Tayloe, founder and president of Strategic Communications Group, last week
(photo credit: VOICE OF HOPE)
Advertisement
The Israeli government allocated a radio broadcast frequency to an American-Christian evangelical radio network that will broadcast across the Middle East. In an unprecedented decision last week, Communications Minister Tzachi Hanegbi, finalized the deal to put the radio on the air. “This radio station exemplifies the deep connection and unique bond that Israel has with the American people and between Jews and Christians,” he said. “We are certain that the message of hope that will be brought by the station will be an uplifting tool and a benefit to our neighbors. “The State of Israel supports any message of peace to the people in neighboring countries and this is why we decided to support the reestablishment of the Voice of Hope.”This is the first time a Christian broadcast frequency has been granted in Israel and the first domestic radio station with international purpose.The evangelical radio network will broadcast messages of hope and peace to the people in Syria, Lebanon, Cyprus and Jordan, and will have expanded night-time coverage into Turkey and Egypt. The Voice of Hope – AM 1287 will have broadcasts in Arabic, as well as some in English, which is meant to help the region’s Arab population, much of which is in a dire situation in the countries surrounding Israel and who are under religious persecution in Syria.The radio station is a continuation of the Voice of Hope, which was established in 1979 by Christian businessman George Otis, and which broadcast until 2000. The new Voice of Hope is owned and operated by Strategic Communications Group, a global Christian Evangelical radio network with radio stations reaching Latin America and Africa. “I am excited that this powerful Christian radio station was licensed by the State of Israel to deliver a message of hope and encouragement to the people of the Middle East,” John Tayloe, the founder and president of the Strategic Communications Group said. “The Voice of Hope is established in support of Christians of the Middle East and is a gift of love from Christians in the United States and Canada.”The Voice of Hope broadcast studios are located on the shore of the Sea of Galilee,. The programming will include Christian-Arabic presenters, Arabic Christian music, news, education, drama and inspirational messages.
Sign up for our Christian World newsletter >>