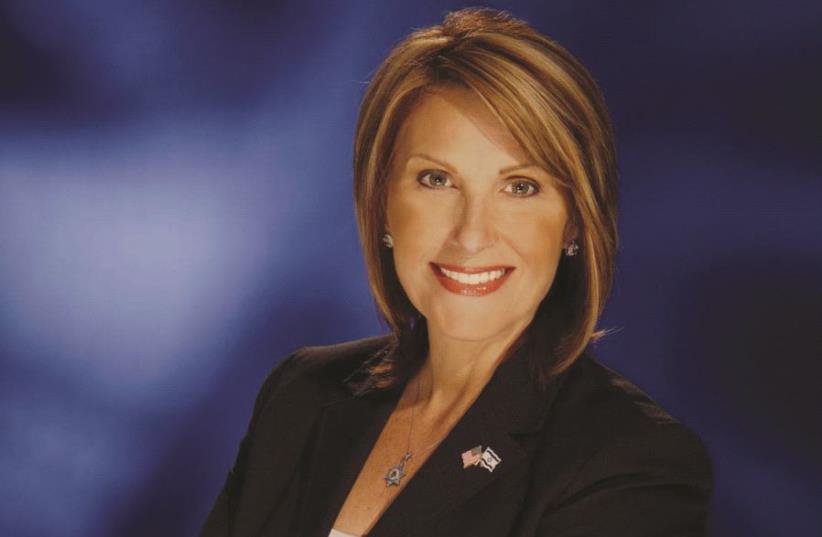 Laurie Cardoza-Moore
(photo credit: FACEBOOK)
Advertisement
It’s incredible that two of the world’s most important bodies – the UN and the US – have leaders who have stated they will be sensitive and supportive of the State of Israel and the Jewish people, a leading Christian-Zionist said.But Cardoza-Moore, who represents the World Council of Independent Christian Churches at the UN and is president of the Evangelical organization Proclaiming Justice to the Nations, says that despite the optimism now is not the time to become complacent. Christians need to show their support for Israel.“If there was ever a time for Christians to take a stand, that time is now,” she told The Jerusalem Post - Christian Edition.She said the passage of Joel 3, in which God tells the prophet that he will put the nations “on trial for what they did to my inheritance, my people Israel, because they scattered my people among the nations and divided up my land” (3:2), has been like a cloud hanging over the earth in the wake of the forming of the anti-Israel Boycott, Divestment, Sanctions movement, and most recently, United Nations Resolution 2334, which declared settlements illegal under international law.Proclaiming Justice to the Nations, a non-profit organization, was established to educate Christians about their biblical responsibility to stand with their Jewish brethren and Israel, utilizing powerful film and video presentations, a variety of grassroots rallies, events and speaking engagements to facilitate dialogue between the Christian and Jewish communities in support of the State of Israel and against global antisemitism.To help members of the faith understand just how vicious, deceptive and antisemitic the anti-settlement and boycott-Israel movement really is, Cardoza-Moore produced her fourth pro-Israel documentary, Boycott This!, which had its global premiere in Jerusalem’s Cinematheque on June 8, and is now preparing for its theatrical release on March 30, where it will be shown in more than 100 theaters in cities across the US and Canada.In the “docu-tainment,” conservative Christian comedian Brad Stine travels around Israel and the rest of the world speaking to those on the front lines of those targeted by the anti-Israel Boycott, Divest and Sanctions movement: from Palestinians working in Israeli companies in Judea and Samaria, to students on American college campuses to Israeli rescue teams such as ISRAID, speaking to a wide array of leading figures who help make sense of this anti-Jewish crusade. The conclusion is straightforward. Stine can’t help but highlight Israeli innovations and philanthropic projects that have positively impacted the lives of millions of people around the world, including Arab citizens of Israel and Palestinians.“The goal is to present a narrative to show that the Jewish people are not a people who have hatred in their DNA,” Cardoza-Moore says. “These are a people who are constantly creating to make the world a better place, to actually fulfill what is says in the Scriptures, that they would be a light to the nations. And to present that story to Christians.”Cardoza-Moore said recently there has been an increase in support to uproot the antisemitism and anti-Israel campaigns, but more is needed.On the one hand, PTJN’s “Israel Indivisible,” a documentary released in 2013 that exposes the historical, archeological, legal and biblical rights that the Jewish people have to their ancient homeland, has been sold out on every new order the organization has made since UN Resolution 2334. Yet the anti-Israel movement, most recently with the decision of several National Football League players’ decision to boycott a trip to Israel, is still making inroads. She called out to all Christians, regardless of their age, to take the call to action.“The elderly have children and grandchildren, and they should order our material, and they should share it with their grandchildren. We’re all so busy, and one of the things we don’t take the time to do is to talk to one another,” she said. “And our grandparents, those who are more seasoned in life, can show these films to their grandchildren and have a discussion about it.”To learn more about Jewish-Christian relations, and the building of the modern State of Israel as envisaged by the prophets of the Bible check us out at @christian_jpost, on Facebook.com/jpostchristianworld/ and see the best of the Holy Land in The Jerusalem Post - Christian Edition monthly magazine.
Sign up for our Christian World newsletter >>