By YAAKOV LAPPIN
Device detonated against IDF soldier March 18
(photo credit: AVIV AZUZ)
Advertisement
An IDF patrol traveling in the northern Golan Heights near the Syrian border came under attack Tuesday, when an explosive device was detonated near the soldiers’ jeep.The soldiers, from the IDF’s Paratroop 202nd Battalion, had stopped and exited their vehicle after noticing suspicious movements in the area.At that point, the explosive went off.Four soldiers sustained light to serious wounds, including the deputy commander of the battalion. 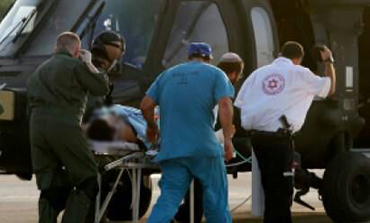 Helicopter extracts wounded soldier March,18 Photo: Aviv Azuz
Soon afterward, IDF artillery units responded by opening fire at targets in Syria. An IDF source later said that the targets struck were Syrian army positions.“The targets have been identified as being linked to those who planted and set off the explosive device,” the source said.Within an hour of the attack, the incident came to a close.Israel told the Syrian government via the United Nations Disengagement Observation Force that Jerusalem views the incident as a grave violation.Prime Minister Binyamin Netanyahu said following the incident that the Syrian border had recently seen growing activities by jihadist and Hezbollah elements. He said his government had successfully maintained quiet on the Syrian front despite that country’s civil war, and would work decisively to maintain security for Israelis.The incident came four days after an IDF convoy traveling in the Har Dov (Shaba Farms) area, on the border with Lebanon, was the target of a bomb set off by Hezbollah on Friday night. One of the armored vehicles was directly hit by the explosion, but there were no injuries among soldiers.The IDF also identified a terrorist cell attempting to plant an explosive device on the Syrian-Israeli border last month.The terrorist cell was operating in Syria very close to the new border fence and according to security sources the attempted attack was orchestrated by Hezbollah.